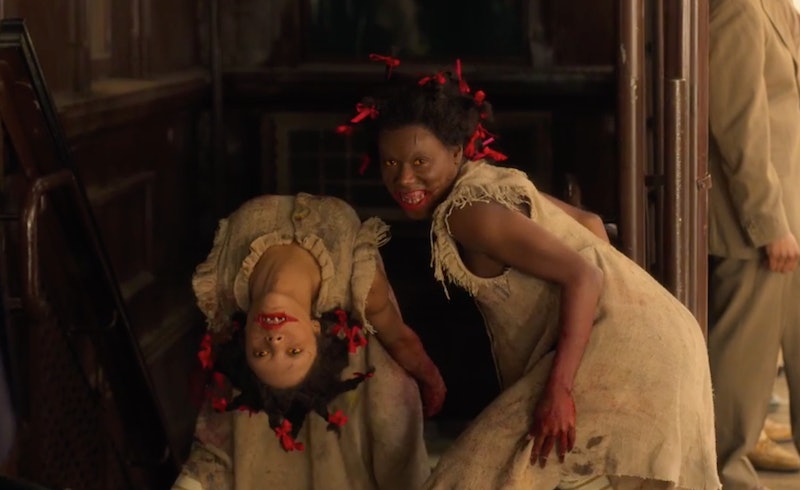 Spoilers ahead for Lovecraft Country Episode 8. Art becomes the stuff of nightmares for comic artist Dee (Jada Harris) in Episode 8 of Lovecraft Country. After running away from a heartbreaking funeral for her friend Bobo, aka Emmett Till, Dee is accosted by Sons of Adam leader Captain Lancaster. He casts a spell on her, and soon Dee is stalked by two terrifying twin girls who appear to spring straight from a novel cover.

It's unclear what Lancaster's spell actually does, but the creatures seem designed to specifically torment Dee. After finding Dee's travel comic with the dead cop in the Mayfield planetarium, Lancaster tracks her down and accosts her. She's unable to tell him about the orrery, so he spits on and curses her. Later, two girls with red lips and wide eyes crawl out of a book and start hunting Dee. Whereas Dee's Orithyia Blue comics were full of sci-fi adventures, strong women, and heroics, Lancaster's spell brings to life a degrading Black caricature that literally follows her around. With George dead and Hippolyta still missing in time and space, Dee is left to fend for herself, running from demons only she can see.

The two girls are direct references to Harriet Beecher Stowe's Uncle Tom's Cabin, a bestselling 1852 anti-slavery novel that was later criticized for popularizing numerous racist archetypes. The girls are meant to be the characters Eva and Topsy, who are often drawn together but portrayed as complete opposites. Eva is a blonde, angelic white girl, while Topsy is a mischievous Black slave who involves Eva in her schemes. This is reflected in the episode, with the white "twin" tending to follow the lead of the Black "twin."

In the novel, Topsy is just 8 years old when Mr. St. Clare purchases her. She "belonged to a couple of drunken creatures that keep a low restaurant that I have to pass by every day, and I was tired of hearing her screaming, and them beating and swearing at her," he informs Miss Ophelia. Stowe initially describes Topsy much like how Dee's monsters appear:

She was one of the blackest of her race; and her round shining eyes, glittering as glass beads ... Her woolly hair was braided in sundry little tails, which stuck out in every direction ... She was dressed in a single filthy, ragged garment, made of bagging; and stood with her hands demurely folded before her. Altogether, there was something odd and goblin-like about her appearance.

Like Stowe's other Black characters, Topsy's traumatic experiences are meant to expose the inhumanity of slavery. Her parents were treated as breeding stock, and as a dark-skinned child, Topsy is expected to work the fields until she dies young. Audiences at the time had difficulty reckoning with the reality of Topsy's story, and it didn't help that Stowe paradoxically portrayed her as a mischievous liar and thief. In the end, it was easier for readers to ignore the barbarism inherent to Topsy's life; she was instead reduced to a comedic figure, becoming the basis for the "pickaninny" stereotype with big red lips, wide eyes, and unkempt hair.

This effect was further compounded when people began adapting Uncle Tom's Cabin into minstrel "Tom Shows." As theater professor Holly L. Derr wrote in The Atlantic, Uncle Tom's Cabin transformed from an anti-slavery text into a racist spectacle onstage. In these minstrelsy performances, Topsy was portrayed as a "happy, mirthful character" who reveled in her slavery. Her dirty clothes, kinky hair, and misuse of English were all turned into comedic props meant to dehumanize her further. These plays eventually spun off into Topsy dolls and Topsy-centric advertising, and over time her imagery became even more insensitively exaggerated and clown-like.

These racist portrayals eventually made their way into cartoons, featuring in episodes such as the Warner Bros.' "Censored 11," which the NAACP decried as "despicable" in 1943. As a young comic artist in the 1950s, Dee would have been aware of the popularity of these images. So, in a way, she's haunted twice over by the Eva and Topsy monsters. They're both a literal curse and a more personal reminder to Dee that white America sees her as an uncivilized joke. It's possible that's exactly why Lancaster conjured them. But in the wake of Emmett Till's murder, their appearance is particularly devastating. Topsy was a tragic child figure who was changed to suit white people's amusement. Similarly, Dee is heartbroken over what happened to Till at just 14 years old; when Dee screams and barrels toward the monsters, it's as if Dee is letting out her anguish over how often Black children are devalued in America.

Like the rest of Lovecraft Country, Episode 8 deftly interweaves supernatural horror with historical facts. Though it ends on a cliffhanger, the episode makes one thing very clear: The specter of Topsy was already haunting Dee long before Lancaster came along.