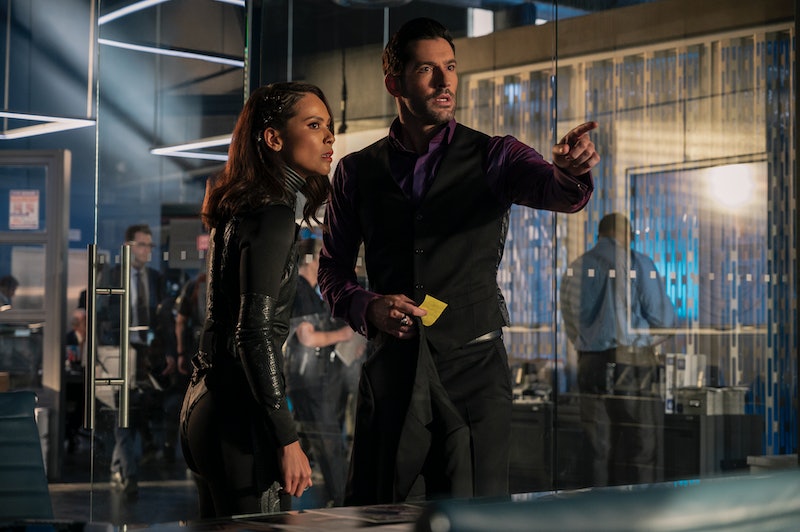 Spoilers ahead for Lucifer Season 5, Part 1. It may be impossible to tell what's going to happen next on a show that literally ended with God coming down to Earth, but fans already have some theories about Lucifer Season 5 Part 2. And hoo boy, is there a lot to theorize about. Why is God showing his face now? What's happening with Maze? Where did Eve go after Season 4? Is baby Charlie really just a human? Why does Michael have an American accent, but Lucifer a British one? And why, oh why can't Lucifer tell Chloe he loves her?

All of these unresolved issues will hopefully be cleared up in Season 5 Part 2, but considering Lucifer has now been renewed for Season 6, some of these questions could very well carry through to the next season. In any case, here's what fans think might be ahead.

1. Lucifer Is Stuck In His Own Hell Loop

As we saw in the Season 5 premiere, a Hell loop doesn't necessarily involve physical torture. It's a psychological prison that can be as mundane as reliving a family reunion or reflecting on a relationship. It could even involve a devilish man trying desperately to fix a relationship he thought he'd lost. If Lucifer is stuck in a Hell loop, it might explain why he can't tell Chloe he loves her. Not telling her how he felt at the end of Season 4 could be his greatest regret — and the wrong he needs to right before his soul can know peace.

2. Michael Will Take Over Hell

Lucifer's twin brother Michael has always been jealous of him. And though he said in Season 5 that he's been manipulating Lucifer's every move since before he was sentenced to an eternity in Hell, it's still possible that he feels inadequate next to his brother. What better way to prove your worth than to take your twin's place on the throne of the underworld? If Lucifer can somehow manipulate Michael into committing to running Hell, it would solve a lot of problems for him and Chloe. Namely, it might allow him to stay on Earth and actually commit to his new relationship.

3. Lilith Is Now Queen Of Hell

This one actually makes a lot of sense. As pointed out by nadia_goulart on Reddit, Lilith died right as Amenadiel returned from Hell. Amenadiel told Lucifer that he left Hell unattended because God told him that the underworld didn't need a guardian. What if God said that because Lilith returned to Hell? She may be a mortal, but she knows an awful lot about celestial beings and how they work, and all of her demon children are in Hell and would probably listen to whatever she says, meaning they'd obey her and trust her as if she were Lucifer. This would, like the previous theory, allow Lucifer to choose to remain on Earth longterm, which means his relationship with Chloe might actually have a shot.

4. Ella Will Find Out The Truth

OK, this isn't so much a theory as a request. Now that Dan knows what Lucifer is, it's only a matter of time before Ella finds out, right? Especially if she meets God in the next part of Season 5. She's driven by her faith, so it makes sense that she would recognize God, just like the nuns recognized Amenadiel as a holy figure when they met him in "Detective Amenadiel." Also, the longer Ella remains in the dark, the more susceptible she'll be to whatever evil plan Michael has up his sleeve, which means Lucifer might have to reveal himself to her if he wants to keep her safe. (Same goes for Trixie, who was suspiciously MIA in the first half of Season 5.)

5. Baby Charlie Is More Powerful Than Amenadiel Can Imagine

This theory was posited by reddit user NomizakGurnisson, who jokingly related baby Charlie to Jack Jack in The Incredibles, but they have a point. Just because Charlie has a cold doesn't mean he doesn't have some divine powers. As Popsugar pointed out, in Season 4, Amenadiel's sister Ramiel could sense a new celestial when Linda was pregnant, meaning Charlie isn't 100% mortal. Perhaps he just hasn't developed his powers, or, even more ominously, maybe God just hasn't decided what abilities to bless his new grandson with.

Season 5 sends Maze on a journey to find herself, open herself up to love, and hopefully, get a soul. On Reddit, cupcakesandwine suggested that Maze will get a soul only to tragically die protecting one of her loved ones. It would be a bittersweet end for such a fierce character, but as Lucifer fans know well, death doesn't necessarily mean the end of a character on the show. If Maze does die, perhaps she could run Hell, or at least reunite with her mother and get the closure she deserves.

It's also important to note that, at the end of Season 5 Part 1, Lucifer still has Lilith's ring, which seemed to hold her soul before she decided to be mortal. It seems inevitable that the ring has some part to play in Maze's quest for a soul, but how exactly?

In the first half of Season 5, Lucifer and Chloe's relationship has some unexpected side effects. Chloe gets his mojo, and Lucifer finds out that she no longer makes him physically vulnerable when she's around him. What he hasn't tested is whether or not he's still invulnerable when Chloe's not around. This could obviously cause some problems, seeing that Lucifer is an act first, think later kind of guy. He could very well throw himself in the line of fire and get himself injured or killed. But if this is true and Lucifer is able to realize it before he seriously hurts himself, it could help him understand how his relationship with Chloe makes him stronger.

Season 4 revolved around Father Kinley's prophecy, which stated, "When the Devil walks the Earth and finds his first love, evil shall be released." At the end of Season 4, Lucifer and Chloe believed that the prophecy had come true when Eve, purportedly Lucifer's first love, unwittingly summoned demons from Hell and they started to wreak havoc on Los Angeles. But as noted by Thrillist, what if the prophecy wasn't avoided by Lucifer returning to Hell? And, taking it one step further, what if the prophecy doesn't actually foretell the death and destruction Chloe had originally imagined? Perhaps what it really means is that when Lucifer can tell Chloe he loves her, he'll be set free from his eternal sentence in Hell. Thus, "evil" — aka Lucifer — will be able to walk the Earth with Chloe.

Lucifer star Tom Ellis recently teased that Lucifer Season 5 Part 2 could premiere as early as this winter, though given the fact that the cast and crew still have to finish filming the finale (they were in the middle of production when coronavirus hit), it's unclear when the show will come back. Until then, perhaps fans will be able to stumble upon some answers.

More like this
Nicola Coughlan Shared A Lady Whistledown Excerpt From ‘Bridgerton’ Season 3
By Grace Wehniainen, Alyssa Lapid and Sam Ramsden
Alicent's Green Dress In 'House Of The Dragon' May Be An Act Of War
By Kadin Burnett
'The Rings Of Power' Episode 4 May Put A Face To Season 1’s New Villain
By Kadin Burnett
Netflix Reveals First Look At Wednesday In The 'Addams Family' Spinoff Series
By Bustle Editors
Get Even More From Bustle — Sign Up For The Newsletter