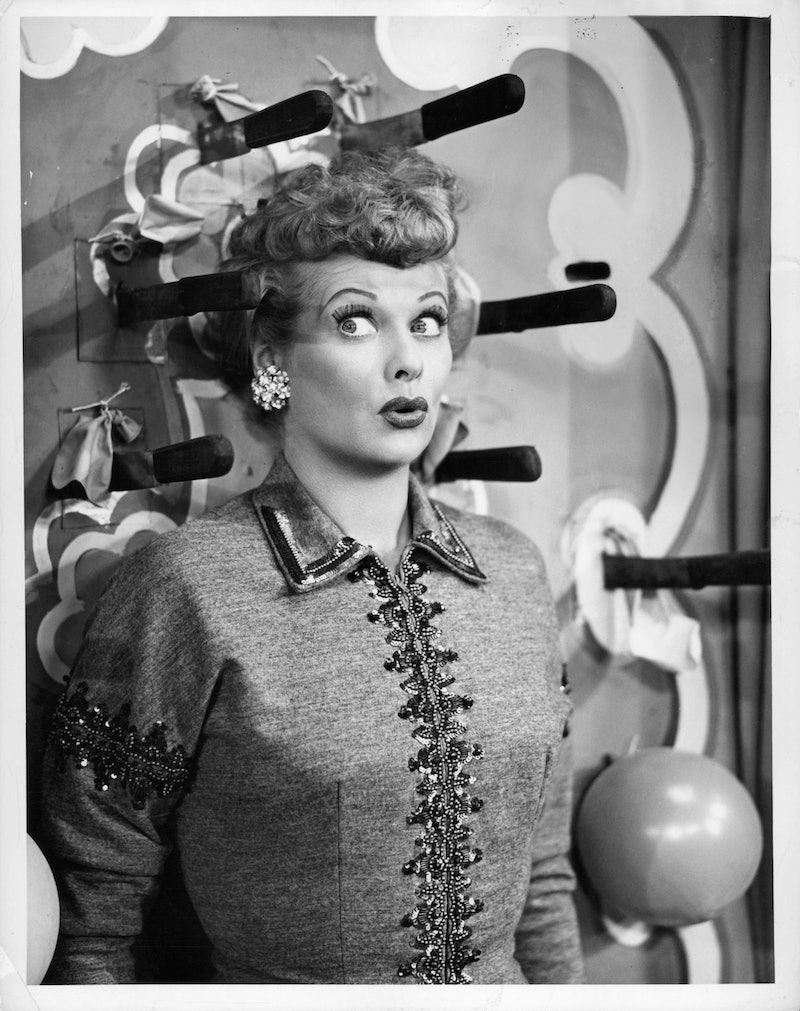 Most people know Lucille Ball as Lucy Ricardo, the madcap but lovable main character of I Love Lucy, the hit 1950s sitcom that remains beloved today. Less remembered now is Ball’s run-in with the House Un-American Activities Committee (HUAC) — at least, until the release of Aaron Sorkin’s new film Being the Ricardos, which focuses on the scandal.

Being the Ricardos follows Ball (Nicole Kidman) and her husband Desi Arnaz (Javier Bardem) during a single week of production on I Love Lucy, as they attempt to produce an episode while managing the fallout from bad press. Below, you’ll find everything you need to know about Ball’s associations with the Communist Party, her dealings with HUAC, and more.

Who was Lucille Ball?

Though Lucille Ball reached the peak of her fame on I Love Lucy, she worked steadily in Hollywood throughout the ’30s and ’40s, often appearing in supporting roles in comedy or musical films like Stage Door and Dance, Girl, Dance. She met Desi Arnaz, a Cuban musician, on the set of the musical film Too Many Girls in 1940, and they were married soon after.

As her FBI file would later reveal, Ball also registered to vote as a member of the Communist Party in 1936. Although Ball would deny any subsequent involvement in Party activities, former screenwriter and HUAC investigator Rena Vale testified that a Communist Party meeting had been held at Ball’s home in 1937, although Ball herself had not attended. The FBI’s investigation also uncovered evidence that Ball had served as a delegate to the party’s State Committee, and that she had participated in radio broadcasts tied to the party in 1940.

How did Ball’s ties to communism become public knowledge?

In 1953, Ball had gone from a modestly successful film and radio actor to the biggest name in television. I Love Lucy was such a hit that 67.5% of all televisions in America tuned in to watch the second season, and according to one surreal statistic, around 44 million people tuned into the show on Jan. 19, 1950 — 15 million more than watched Dwight D. Eisenhower’s inauguration the next day. Philip Morris had also invested $8 million in advertisements for the program, an enormous amount of money in 1953, making it a massive asset not only to Philip Morris but also to broadcaster CBS.

By the time radio personality Walter Winchell broke word of the HUAC’s investigation into Ball, the Red Scare was in full swing, and the prospect of America’s most beloved television personality moonlighting as a communist sent the press into a frenzy. According to media historian Susan Carini, the Los Angeles Herald-Express used red ink to print its headline about the story, and reporters swarmed the studio lot where I Love Lucy was filmed.

Other major stars and writers had been forced to publicly testify before HUAC, and some had suffered grievously from the strain of that experience and from subsequent lost work. John Garfield, for instance, was a major movie star in the 1940s who lost work and passed away prematurely after HUAC investigated him. But Ball’s interview with HUAC was conducted privately and her case was dismissed, despite the fact that she gave unpersuasive answers to HUAC investigator William Wheeler. In her interview, she repeatedly claimed that she had registered to vote as a member of the Communist Party as a favor to her beloved grandfather, and had no involvement with the Party — despite evidence to the contrary.

The HUAC might have been happy to let America’s sweetheart off the hook, but once Winchell discussed the investigation publicly, Ball’s past associations with the Communist Party became a national scandal. Wheeler’s interview with Ball was published in newspapers, and Ball and Arnaz gave interviews in which they repeated that the registration had been a favor to Ball’s grandfather, a passionate Socialist.

Though Lucy participated in these interviews, Arnaz did most of the talking for his wife, often describing her as clueless, spacey, or naive; for example, “I have been married to you 13 years and in that time you have signed I don’t know how many thousand papers. And you haven’t read one of them yet!” And at the recording of I Love Lucy’s season premiere episode, which took place as this scandal was unfolding, he gave an impassioned speech to the studio audience, telling them, “Lucille is no Communist! Lucy has never been a Communist, not now and never will be. I was kicked out of Cuba because of Communism. We both despise the Communists and everything they stand for.”

Why wasn’t she blacklisted?

The evidence the FBI collected on Ball was, by the HUAC’s normal investigatory standards, more than enough to blacklist her. And yet practically everybody involved in the investigation, from the HUAC, to the press, to the FBI itself, was more than willing to sweep the allegations under the rug. Although HUAC investigations had led to the blacklisting of many successful actors and screenwriters, Lucille Ball’s power ultimately outmatched the committee’s. As Ed Sullivan wrote of the affair in his nationally syndicated column, “It’s a singularly fortunate thing for Lucille Ball that she’s been a weekly visitor to millions of American living rooms. In those Monday nights, people have come to know her well.”

Throughout the investigation, Ball found sympathy from unlikely quarters. As Carini dryly observes, her FBI file “seems to have been assembled by a Lucy worshiper, replete as it is with positive press clippings that dilute the sting of her association with communism.” Arnaz claimed to have been tipped off to Winchell’s plans to discuss Ball’s run-in with HUAC by FBI director J. Edgar Hoover himself: “Hoover told me about it at a racetrack. He said there was nothing he could do.” Even famously conservative gossip columnist Hedda Hopper, with whom Ball was friends, wrote a sympathetic column about the situation. (A year-and-a-half later, I Love Lucy aired an episode titled “The Hedda Hopper Story.”)

In short, people simply loved Lucy. The normal rules didn’t apply to a beloved comedienne in whom Philip Morris had invested $8 million. Vice president of CBS Harry Ackerman dismissed the investigation as trifling, saying, “the people seem to think this thing is silly, not serious. They all love Lucy.” Most people investigated by the HUAC didn’t have these advantages. But Ball’s encounter with the Committee proved that there was stardom and then there was stardom. As film historian Thomas Doherty writes, “From the episode of the redhead and the blacklist, the lesson learned was that while the small fry were hooked and gutted, the big fish would be tossed back.”

More like this
'The Wilds' Has A Major Cliffhanger To Resolve In A Potential Season 3
By Brad Witter
The 'Hocus Pocus' Sequel Finally Has A Release Date & It Makes Total Sense
By Shannon Barbour and Radhika Menon
Where Is Dr. Cline Now?
By Morgan Leigh Davies
Why The '365 Days' Sex Scenes Are Good, Even If The Movies Aren’t
By Arya Roshanian
Get Even More From Bustle — Sign Up For The Newsletter