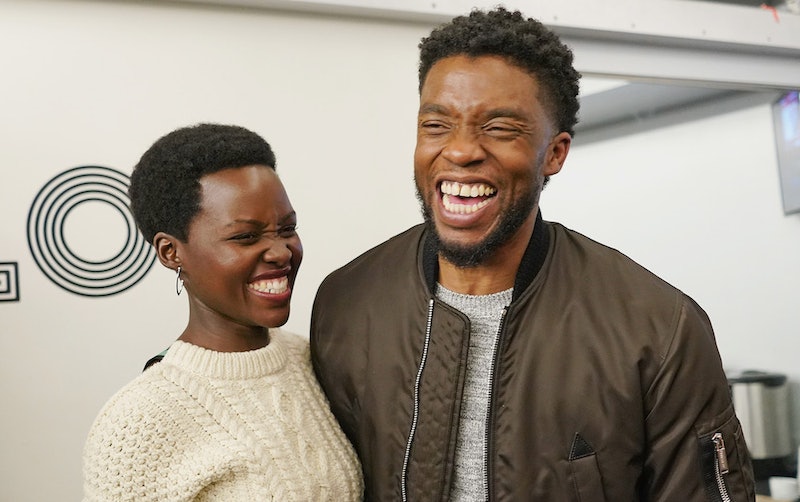 In a moving tribute shared on Instagram, Lupita Nyong’o paid tribute to Chadwick Boseman and called his death a “punch to [the] gut every morning.” Boseman died on Aug. 28 after a four-year battle with colon cancer. He was 43. In the post shared on Tuesday, Sept. 8, Nyong’o reflected on her Black Panther co-star’s “quiet, powerful presence” and called on others to take their time in mourning the loss — an ethos that Boseman himself lived by.

“I am struggling to think and speak about my friend, Chadwick Boseman, in the past tense,” Nyong’o began. “It doesn’t make sense. I am aware that we are all mortal, but you come across some people in life that possess an immortal energy, that seem like they have existed before, that are exactly where they are supposed to be… Chadwick was one of those people.” Calling Boseman a “man who made the most of his time, and somehow always managed to take his time,” Nyong’o observed that he “never seemed rushed” and “commanded his time with ease.”

“When I was around Chadwick, I wanted to be better, less petty, more purposeful,” Nyong'o wrote. Referencing his roles as Black icons in films like 42, Get on Up, Marshall, and Black Panther, Nyong'o continued, “He cared so deeply about humanity, about Black people, about his people. He activated our pride. By pushing through and working with such high purpose in the films he chose to commit to, Chadwick has made the infinite his home.”

To honor Boseman’s ethos about making the most of time, Nyong'o promised “not to waste my time.” She wrote, “Chadwick’s death is something that I can neither take in nor take in my stride right now. Perhaps time… I’m going to take my time… and in his honor, I promise not to waste my time.” Nyong'o concluded her tribute with a hashtag of a phrase from Boseman’s wife, Taylor Simone Ledward: #TakeYourTimeButDontWasteYourTime.

Nyong'o’s tribute comes after she reportedly joined her fellow Black Panther co-stars Michael B. Jordan and Winston Duke for a private memorial held for Boseman in Malibu, California on Saturday, Sept. 5. The stars gathered with Ledward and Boseman’s family to say goodbye to the late actor in a memorial that overlooked the ocean, according to photos obtained by The Sun. Boseman’s family revealed in an initial statement that he had been diagnosed with stage three colon cancer in 2016.

“A true fighter, Chadwick persevered through it all, and brought you many of the films you have come to love so much,” the family statement read. “From Marshall to Da 5 Bloods, August Wilson’s Ma Rainey’s Black Bottom and several more, all were filmed during and between countless surgeries and chemotherapy. It was the honor of his career to bring King T’Challa to life in Black Panther."