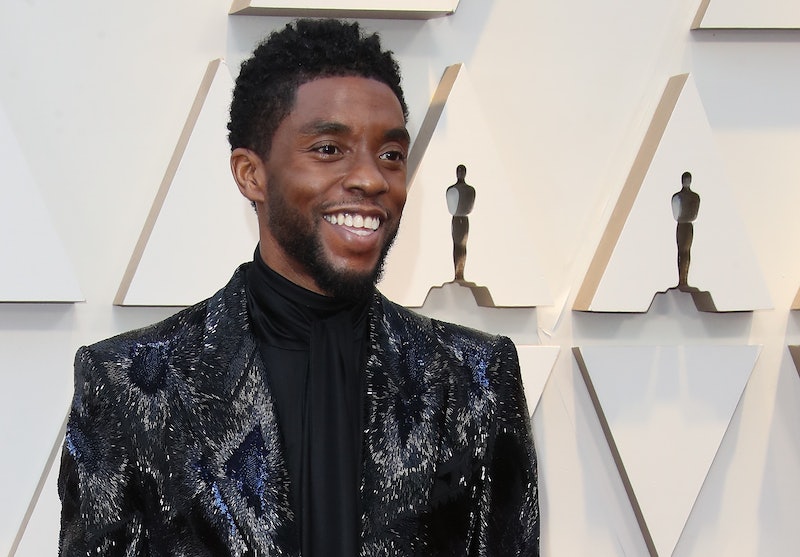 Chadwick Boseman's death may have come as a shock to fans, but his decision to keep his cancer diagnosis private made perfect sense to his loved ones. In a new interview with The Hollywood Reporter, the late actor's longtime agent, Michael Greene, revealed that Boseman's mother is the one who inspired him to keep his cancer diagnosis secret from the general public. He said he believes Boseman's "private" nature was influenced by the way his parents — Carolyn and Leroy — raised him.

"[Carolyn] always taught him not to have people fuss over him," Greene explained. "He also felt in this business that people trip out about things, and he was a very, very private person." Unfortunately, Greene revealed, that meant that Boseman "was really in hardcore pain" on the set of the upcoming Netflix film, Ma Rainey’s Black Bottom. However, the actor "felt that being able to be with Denzel [Washington] and to launch this cycle of August Wilson['s plays] at Netflix was so exciting to him."

Greene was one of the few people in Boseman's life who knew about his illness. His trainer Addison Henderson also knew that the actor was sick, but that he wanted people to focus on his work and legacy rather than his diagnosis. "For us, it was just like, 'Let’s keep going, let’s keep doing what you want to do, let’s keep training.' And then, me and [collaborator Logan Coles] and his family, his wife [Taylor Simone Ledward], we were always just here to support him," Henderson told THR. "He was just living his artistic life to the fullest and using his time and his moment to really affect people."

On Aug. 28, Boseman's family announced in a statement on his official social media accounts that Boseman had died of colon cancer at the age of 43. "Chadwick was diagnosed with stage III colon cancer in 2016, and battled with it these last 4 years as it progressed to stage IV," the statement read. "A true fighter, Chadwick persevered through it all, and brought you many of the films you have come to love so much. From Marshall to Da 5 Bloods, August Wilson’s Ma Rainey’s Black Bottom and several more, all were filmed during and between countless surgeries and chemotherapy."

Despite all of the surgeries and chemotherapy sessions — and his busy filming schedule — Boseman managed to keep his illness and diagnosis a secret from almost everyone he worked with. "Chad deeply valued his privacy, and I wasn’t privy to the details of his illness," Black Panther director Ryan Coogler wrote on social media, shortly after news of Boseman's death broke. "After his family released their statement, I realized that he was living with his illness the entire time I knew him. Because he was a caretaker, a leader, and a man of faith, dignity and pride, he shielded his collaborators from his suffering. He lived a beautiful life. And he made great art. Day after day, year after year. That was who he was."

Boseman's kindness and selflessness didn't just end when the movies wrapped, as Coogler revealed that the actor frequently checked in on him during quarantine, even though he was incredibly sick. "He would send vegetarian recipes and eating regimens for my family and me to follow during the pandemic. He would check in on me and my loved ones, even as he dealt with the scourge of cancer," the director wrote. "It is with a heavy heart and a sense of deep gratitude to have ever been in his presence, that I have to reckon with the fact that Chad is an ancestor now. And I know that he will watch over us, until we meet again."