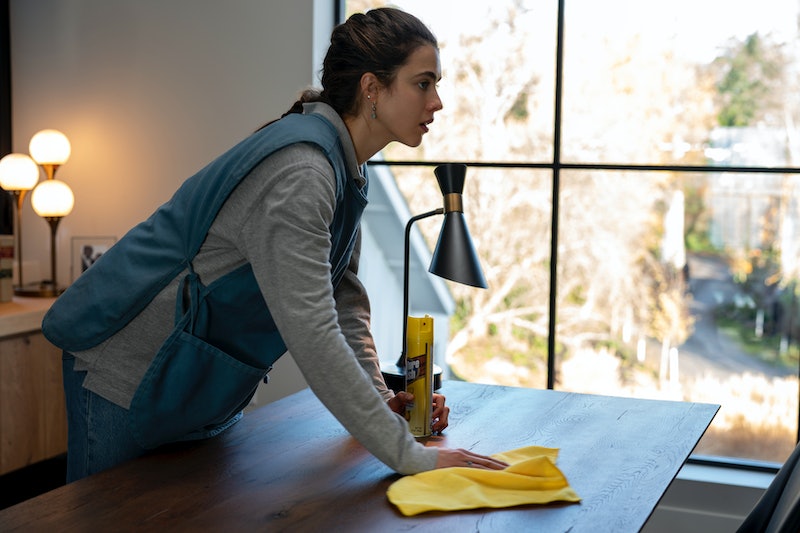 Alex Langley does everything right. She takes every housekeeping shift she’s offered at work despite the pay or distance. She completes her government assistance applications in a timely, thorough fashion. She avoids drugs. She’s an attentive parent. She does what she’s asked by her boss, her landlord, her case worker. Her hard work is relentless, but it’s never enough. In Maid, Netflix’s absorbing and heartbreaking miniseries about single motherhood below the poverty line, Alex’s ability to provide for herself and her daughter ultimately comes down to luck.

In the show’s earliest moments, Alex appears utterly luckless. She runs away from her abusive boyfriend, Sean (Nick Robinson), in the middle of the night and turns up on the doorstep of friends who’ve already taken Sean’s side. When she pulls over to sleep in a Washington park, the cops tell her to leave and try the Walmart parking lot; that her two-year-old, Maddie, is with her seems to make no difference. Eventually, Alex finds herself at a shelter for survivors of domestic violence, though she struggles to admit that’s what she is. Sean has controlled her money and her access to the outside world for years; on the night she finally escaped, he punched a wall near her head. “They bark before they bite,” another shelter resident warns her.

Denial can be a useful coping mechanism in the short-term, and Margaret Qualley plays Alex with resilience to match the moment. When she needs a pay stub to secure subsidized housing, for example, she lands a job by the end of the day. She cobbles together every document she needs to secure government-assistance for daycare and SNAP benefits. When Sean files for primary custody, she enrolls in parenting classes to please the court.

Alex’s tenacity keeps her and Maddie afloat from week to week, but again and again, she’s forced to overcome unexpected crises. When she discovers toxic black mold in her rent subsidized apartment, for example, she takes refuge with her mother in an RV. It’s not ideal, but it’s a warm, dry alternative to Walmart. When a car accident leaves her without a way to get to work, an old friend gives her a car that’s been sitting in his garage. And when she begrudgingly moves back in with Sean and he begins abusing her again, it’s a wealthy client who secures the legal help Alex needs.

If that last relationship strikes you as implausibly benevolent, it’s also essential to the point Maid makes about escaping poverty: it’s almost impossible on your own. To get housing assistance, Alex needs a job, but to get a job, she needs daycare, and to get daycare assistance, Alex needs a home address. The moments in which Alex approaches success are when some kind of deus ex machina arises to solve each dilemma — the ones that hard work alone aren’t enough to hurdle. It’s luck, in the narrowest sense, that Alex cleaned the right house on the right day.

Critically, Alex grew up middle class. She was enrolled in college before she became pregnant. She applied to schools when she had a little money to do so; re-applying is, luckily, free. And while Maids doesn’t address it directly, it’s surely relevant that Alex is white. She copes with skepticism about her circumstances and capabilities as a mother — a condescending pediatrician informs her that she needs to “do better” for Maddie — but even the US Department of Health and Human Services acknowledges bias against families of color. To take one example, Black and American Indian or Alaska Native children are more likely than other children to be removed from their homes and to experience a termination of parental rights.

Maid is grueling, but with the exception of a depressive spell in a late episode, there’s little sense Alex won’t emerge into a better life. That the series was adapted from Stephanie Land’s New York Times best-selling memoir Maid: Hard Work, Low Pay, and a Mother's Will to Survive is partly why, but it’s also owed to the way Qualley approaches playing Alex. She’s clear-eyed and proactive. But for a single mom, escaping poverty isn’t a marathon; it’s a mission to the moon. Maid excels at dramatizing how broken the US social support system is by demonstrating how much more than social support and her own hard work Alex needs to make it out.

More like this
Here’s Everything Coming To & Leaving Netflix In February
By Jake Viswanath
All The ’70s Easter Eggs You Missed In 'That ’90s Show'
By Grace Wehniainen
'The Crown' Season 6 Has Suspended Filming "Out Of Respect" For The Queen's Death
By Bustle Staff
Ozzie’s Coming Out Scene With Kitty On 'That ’90s Show' Has Twitter Sobbing
By Brad Witter
Get Even More From Bustle — Sign Up For The Newsletter
From hair trends to relationship advice, our daily newsletter has everything you need to sound like a person who’s on TikTok, even if you aren’t.