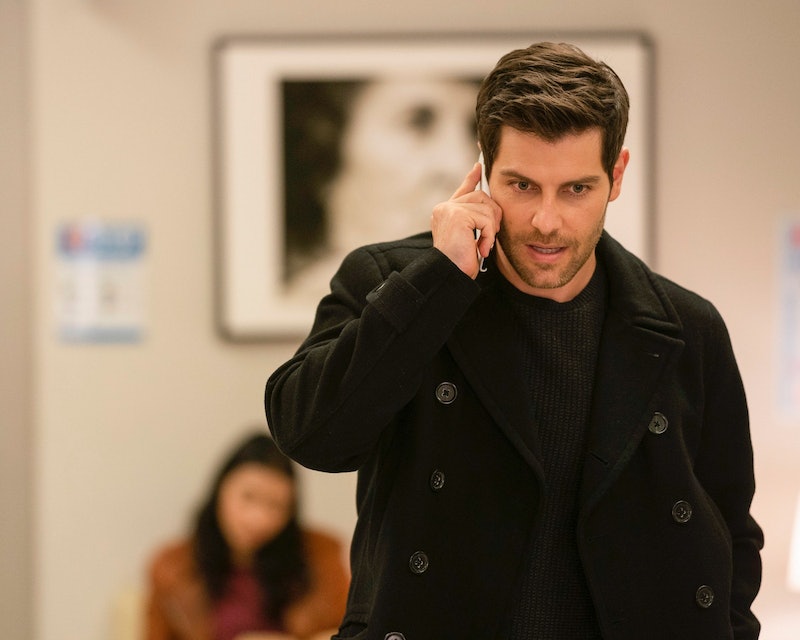 Spoilers for the A Million Little Things Season 3 premiere. Fans finally know Eddie's fate on A Million Little Things. Though he managed to survive being hit by a car in the Season 2 finale, he's not exactly out of the woods. Not only is he now paralyzed from the waist down, the end of the Season 3 premiere shows a flashback from the perspective of the man who hit Eddie that definitely hints he still wants him dead. It seems like he intentionally hit Eddie that fateful night, and he looked less than pleased to see him at his vow renewal ceremony, still alive.

That's because the man is Reverend Stewart, the father of Alex — aka the girl who drowned while partying with Eddie as a teenager. Eddie saw him for the first time in many years while visiting his old beach house in Season 2. Eddie was either too drunk to remember or had repressed the memory of Alex's final moments, but when it started to come back to him, he went to the house in search of clues. He eventually remembered that he and Alex had been drunk on a boat in the lake when she seemingly fell into the water. Eddie was unable to pull her back up, and she drowned. When Reverend Stewart saw Eddie again by the lake, he yelled at him to go away and leave his family alone because he'd already done enough to them.

Perhaps seeing Eddie after all that time reignited the Reverend's anger about Alex's death. It does seem — to viewers, at least — to have been an accident. But Alex's dad probably blames Eddie for partying with Alex, taking her on the boat, and not being able to save her. And it appears that the Reverend has decided that if his daughter is dead, Eddie should be too.

At the end of the episode, the Reverend watched as Eddie happily exchanged vows with Katherine surrounded by friends. He seemed upset, probably because he wanted Eddie's family to feel the pain that he has. But they all look pretty happy in that moment. Will Alex's dad try to finish the job? We'll likely found out next week.

More like this
Shonda Rhimes' Net Worth Makes Her One Of The Wealthiest People In TV History
By Hugh McIntyre
Caleb McLaughlin Details Racism From 'Stranger Things' Fans
By Radhika Menon
Who’s The Richest 'Grey’s Anatomy' Star? See The Net Worth Of Each Cast Member
By Hugh McIntyre
'The White Lotus' Season 2 Trailer Teases Multiple Affairs & Another Dead Body
By Bustle Editors
Get Even More From Bustle — Sign Up For The Newsletter