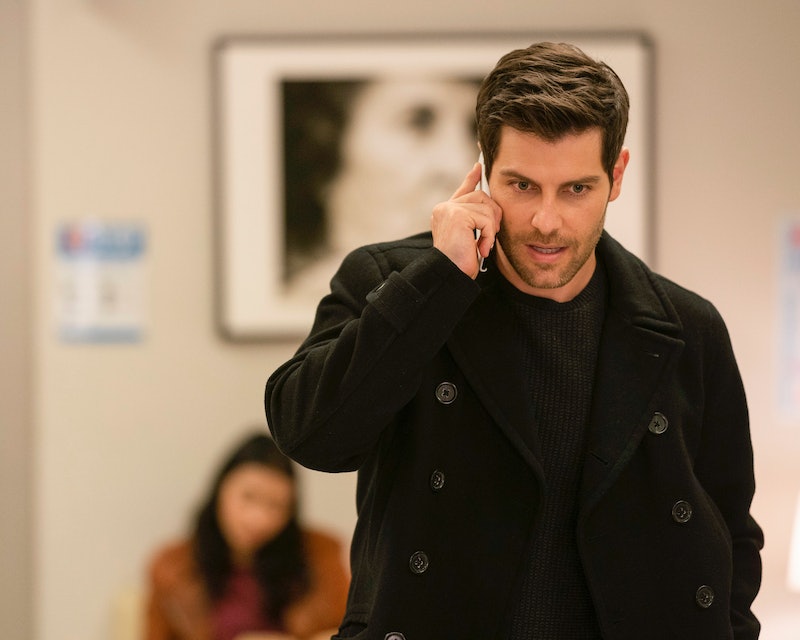 Spoilers ahead for A Million Little Things Season 2, Episode 18. Now that the Jon/Barbara Morgan mystery has long been solved, it was about time that the show introduced something new for fans to try to solve. And the Alex and Eddie mystery on A Million Little Things will carry over to the next season, according to what creator DJ Nash told TV Guide., which means we're still a while from figuring out exactly what happened at Eddie's lake house.

The mystery began when Eddie reconnected with his sister Lindsay, who also has an alcohol use disorder, just like her brother. She's sober now, and when she visited Eddie she told him she'd been thinking about a lot of things, including why they stopped visiting their childhood lake house. Eddie figured it was just because of an accident years ago where a person named Alex Stewart died, and that their parents hadn't wanted to go back. But Lindsay clammed up after that in a way that showed that wasn't the whole reason.

In the March 19 episode, it became clear that Eddie may have had something to do with Alex's death. She was found dead in the water, and Eddie had been found passed out and soaking wet by his sister. She got him back to the house and lied to make him think he'd gone up to the house hours ago. In reality, he was the last one to see Alex alive.

The March 12 episode may have hinted at what happened between the two of them. Eddie had a dream that he was on the lake in a boat with Jon. When Eddie stood up, the boat tipped and Jon fell into the water. As Eddie went to grab his arm to save him, it was a young woman's hand he grabbed instead. It seems now like it was Alex's. All the clues seem to suggest that Eddie, drunk and high on cocaine, went out on the lake with Alex that night, and she fell out of the boat and drowned. But that is such a straight-forward answer, it doesn't seem like it can sustain the "huge" multiple season storyline that Nash teased.

"This is the mystery we're following for the rest of the season and into next season. Obviously, something happened in their past, and it appears as though Lindsay may have started drinking because of it — or certainly, it was a catalyst for her drinking to try to forget what happened," Nash told TV Guide. "It's something that because Eddie was drinking, he wasn't lucid. He doesn't totally remember ... We are tracking him uncovering more about something that happened in their past, and we'll see the effect that has on both of them."

As Eddie digs deeper into his involvement in the night that Alex died, he may turn up answers he's not prepared for. Nash told TV Guide that while Eddie had previously been in a really good place with his sobriety, his career, and his relationship, things may unravel. "Now, we are making it so [Eddie's] not going to be in a good place. It's the perfect storm of unfortunate events that happened to [Katherine and Eddie], just when they're in a great place," Nash said. "Fans of our show, I've heard them say like, 'Oh, Eddie and Katherine are in such a good place. It's not as exciting.' It's about to get exciting."

The next episode airing on March 26 is the Season 2 finale, and the synopsis promises that "Eddie learns more about his involvement in the mysterious lake accident." That information could come from guest star Betsy Brandt (Breaking Bad) who is set to play Alex's sister Colleen.

Colleen was hanging out with Eddie, Alex, and Lindsay on the fateful night her sister died, and she may be able to tell Eddie something he doesn't already know. He called her during the March 19 episode, but Colleen was very hesitant to talk, explaining that her dad was sick and she didn't want all of this coming back up for their family. However, a photo from the next episode shows her standing presumably at Eddie's door, looking shaken but maybe ready to say something.

Fans who think they have it all figured out about Alex's death may want to wait until we get more information. If this storyline is carrying over to next season, we can't possibly have all the pieces yet. Although at least Colleen is likely to give Eddie a big chunk of the puzzle during the finale for fans to mull over until the next season.