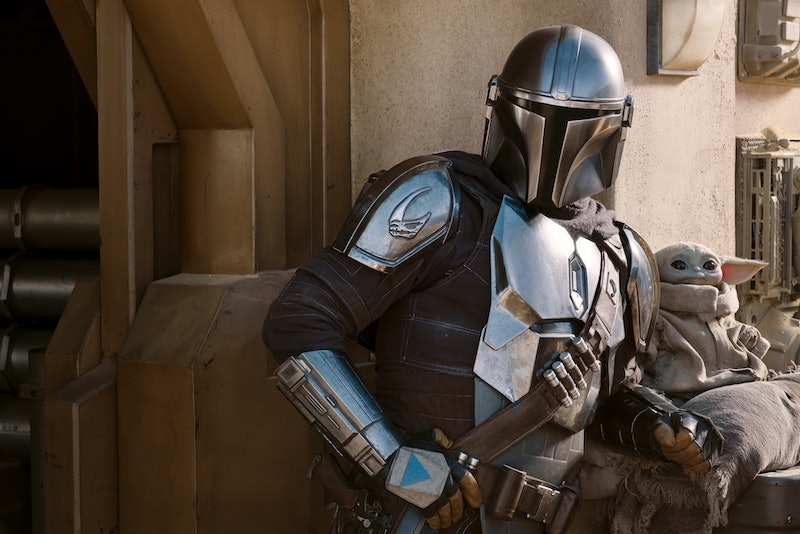 Full of mysteries, The Mandalorian is. Last season's finale featured the Mandalorian, Greef Karga, Cara Dune, and The Child (aka Baby Yoda) just barely escaping from a stand-off with Moff Gideon. While the Mandalorian finally revealed his real name — Din Djarin — we still don't know much about The Child, or even what the show's end goal is. On top of that, the season ended with Moff Gideon holding a mythic weapon that has deep connections to Star Wars lore. This has fueled numerous Mandalorian Season 2 theories about what — and who — we can expect to see next.

Mando Will Wield the Darksaber

The Mandalorian Season 1 finale revealed that Moff Gideon is in possession of the Darksaber, an ancient lightsaber with a black-energy blade and a crackling white edge. Originally introduced in the Star Wars: The Clone Wars animated series, the Darksaber was created by Tarre Vizsla, the first Mandalorian to become a Jedi Knight. It's a powerful symbol of leadership for the Mandalorians, so naturally fans on Reddit are hoping that Din will eventually wield it. As Reddit user Mythoclast pointed out, "The Child is a Force user [who] Din needs to help," so their relationship is like another "union of Mandalorian and Jedi ... Din is getting the Darksaber."

As Reddit user Gremlech suggested, Moff Gideon's endgame for having the Darksaber is probably to gain some connection to The Force — which doesn't seem to be possible at the moment, but who knows? Gremlech pointed out that Moff already has a saber and a Vader-esque costume to bring back The Empire, so "he just needs the one thing he can't easily steal or have made," which of course is The Child.

Alternatively, another Redditor suggested that Moff is "just working for the Emperor, perhaps even under the pretense that the Emperor will give him Force powers."

Sabine Will Take Back the Darksaber

There's going to be quite a few cameos in Season 2, including who fans hope is Star Wars Rebels' Sabine Wren, played by WWE star Sasha Banks. Sabine is both a Mandalorian and a Resistance rebel who once attended the Imperial Academy of Mandalore. She also wielded the Darksaber at one point, but handed it off to Bo-Katan to unite the Mandalorian tribes. Since Moff Gideon took part in the Great Purge and now has the Darksaber, the implication is that Bo-Katan died. But Sabine appears as a hooded figure in the trailer, suggesting she may try to take the Darksaber back from Moff.

Another theory for why Sabine is present is that she'll eventually lead Din and The Child to Jedi Padawan-turned-rebel-leader Ahsoka, rumored to be played by Rosario Dawson. At the end of Star Wars Rebels, Sabine and Ahsoka traveled together, so it would make sense for her to eventually lead them to Ahsoka.

As for what Ahsoka's role will be, Reddit user JerpenBeck suggests she'll be a conflicted mentor for The Child, and could end up sacrificing herself for his safety. "I believe there is a high possibility that there will be some type of battle between Moff Gideon and his army, and she will protect The Child and Din for long enough for them to escape," JerpenBeck wrote. "She will provide them with some message leading them on a future journey, and she may reappear as a Force ghost."

Will Luke Skywalker Show Up?

One of the wildest theories out there has to do with the Mandalorian custom that states the Darksaber belongs to whoever kills its former owner. Reddit user ImpulsiveBeetle suggested the Darksaber's true owner is actually Luke Skywalker, since it was essentially passed from Darth Maul to Obi-Wan Kenobi to Darth Vader to Luke. While a Luke cameo is pretty far-fetched, Solo did cast Alden Ehrenreich as Han Solo, so we know they're open to the idea of new actors. But a Luke appearance would likely upstage Din and The Child on their own show.

Where Is Boba Fett?

Considering he's the most popular Mandalorian character from the Star Wars films, fans are keen to see Boba Fett appear in the show eventually. Many theorize that he was the figure who appeared in front of Fennec Shand in Episode 5. "I was VERY skeptical about the figure at the end of Episode 5 being Boba. But considering how Moff Gideon seems completely dissociated from that incident, all things considered, I'm actually getting pretty sure that it's Boba," wrote therealcooldude.

We still have no idea where The Child is from, so it feels inevitable that we'll eventually end up at their home world. It's not yet clear if they're the last of their kind, but fingers crossed that somewhere out there, there's a planet full of doe-eyed Baby Yodas.