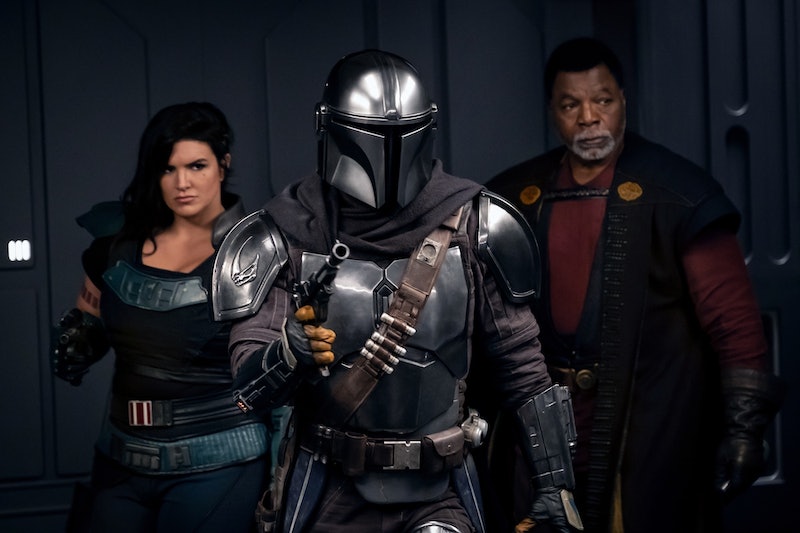 The Mandalorian is back with more action, more Easter eggs, and most importantly, more Baby Yoda. After narrowly surviving an encounter with Moff Gideon, Mandalorian Season 2 follows The Mandalorian as he continues his journey to reunite The Child, aka Baby Yoda, with its own kind. It's a cross-galaxy road trip that will undoubtedly put the pair in the crosshairs of the most dangerous villains of the galaxy, and potentially connect them to key characters from other Star Wars properties.

“The new season is about introducing a larger story in the world,” Mandalorian creator Jon Favreau told Entertainment Weekly in September. “The stories become less isolated, yet each episode has its own flavor, and hopefully we’re bringing a lot more scope to the show.”

Here's everything we know.

Per the Mandalorian Season 2 fact sheet, Pedro Pascal is set to reprise his role as the titular Mandalorian. Also returning are Gina Carano (as Cara Dune), Carl Weathers (as Greef Karga), and Giancarlo Esposito (as Moff Gideon).

There's a popular and longstanding rumor that Rosario Dawson will join Season 2 as Ahsoka Tano. Disney has been tight-lipped about confirming Dawson's role — or any new role, really — but in April she seemed pretty confident that the casting was happening. “That’s not confirmed yet but when that happens, I will be very happy," Dawson told Variety.

As for other new castings, WWE wrestler Sasha Banks appears in the trailers as a hooded figure. Fans are hoping she's playing Sabine Wren, a character from the animated Star Wars Rebels show. SlashFilm also reported that Timothy Olyphant is likely playing Cobb Vanth, a sort of intergalatic gun-slinger who may have Boba Fett's armor. Other rumored castings include Temuera Morrison as Boba Fett, Katee Sackhoff as Bo-Katan Kryze, and Michael Biehn in an unknown role.

Disney released the Mandalorian Season 2 trailer in September, and it teases a major connection to the Jedi. "You must reunite [The Child] with its own kind," the Armorer says in a voiceover. "The songs of eons past tell of battles between Mandalore the Great and an order of sorcerers called Jedi." When Mando asks the Armorer if she really expects him to deliver The Child to a "race of enemy sorcerers," the Armorer responds with, "This is the way."

We briefly see Banks' hooded character, who is implied to be connected to the Jedi based on how she appears during the Armorer's voiceover. Could she possibly be the one to lead The Mandalorian to Dawson's Ahsoka?

What will Mandalorian Season 2 Be About?

Disney has unsurprisingly been keeping pretty quiet about details surrounding Season 2, but you can expect The Mandalorian to keep protecting The Child with Moff Gideon hot on their tails. Esposito told SlashFilm that he "most certainly" has a larger role to play in Season 2, and his wielding of the Darksaber is likely a major part of that.

Meanwhile, Weathers told Entertainment Weekly that Greef Karga will be “on a quest to be more legitimate." He also noted that his character becomes much closer to fellow merc Cara Dune, to the point where they “almost finish each other’s sentences.”

But as Pascal told EW, one of the biggest Season 2 arcs will be the orphaned Mandalorian's emotional journey as he becomes more comfortable being a paternal figure. “We start very directly after the first [season] and he's going into very dangerous territory," Pascal said. "He is very much a passenger to the experience in unexpected ways — not knowing what’s to come, not knowing how much or how best to protect the Child. We don’t know how far he will go to do that, and they’re finding new ways to push the envelope.”

More like this
Louisa Harland’s New Show Is A Far Cry From Derry Girls
By Frances Stewart
Spencer Matthews Will Search For His Brother In A New Disney+ Doc
By Darshita Goyal
Here's When 'The Crown' Season 5 Will Premiere — And What To Expect
By Bustle Editors
'Firefly Lane' Season 2 Will Be The Show's Last — But There's A Twist
By K.W. Colyard and Grace Wehniainen
Get Even More From Bustle — Sign Up For The Newsletter