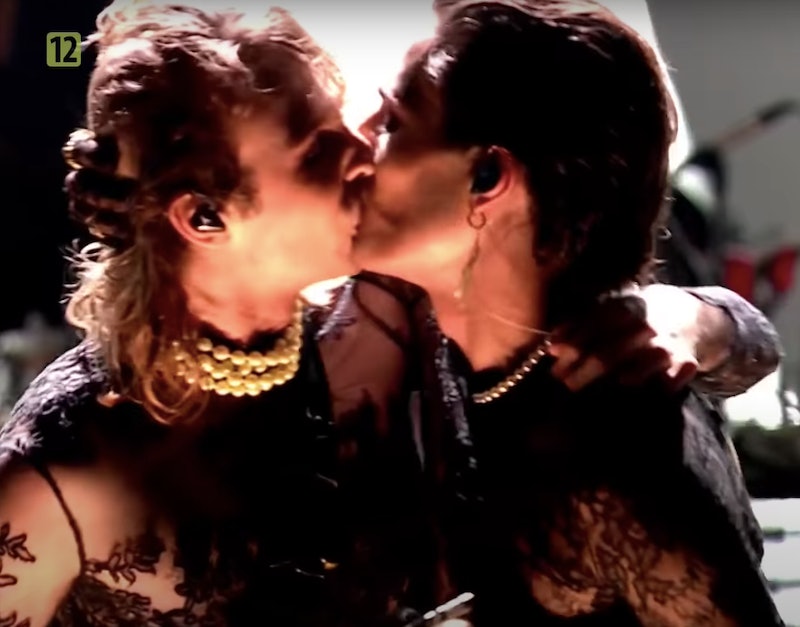 Eurovision winners Måneskin have received an outpouring of applause after bandmates Damiano David and Thomas Raggi shared a kiss live on stage in Poland in support of LGBTQ+ rights in the country where there’s growing hostility towards queer people.

Performing at the Polsat SuperHit Festival this weekend, the Italian rockstars locked themselves in a passionate embrace during a live rendition of their song “I Wanna Be Your Slave”.

The singer ended his statement by shouting, “Love is never wrong!”

Måneskin, who were crowned winners of Eurovision 2021 back in May, shared the groundbreaking performance to their Instagram page, where they further called for “Equal rights for the LGBTQIA+ community.”

“Thank you so much. Especially for doing this in Poland,” responded one fan in the comments. Another wrote, “Thank you from all Polish people - what you’ve done here is super important (our president says that lgbt+ aren’t people but ideology).”

Måneskin’s show of support for LGBTQ+ people in Poland comes at a pivotal time.

While homosexuality was legalised in Poland in 1932, in May 2021, Poland was ranked the worst country in Europe for LGBT people for the second year running by ILGA-Europe. Per BBC News, the country has seen “100 towns and regions across Poland” declaring themselves “LGBT-free zones” and, what’s more, the Polish government has proposed a legal loophole “to prevent LGBT+ people from adopting children completely.” Meanwhile, Polish President Andrzej Duda lashed out at what he described as LGBTQ+ “ideology” last year, saying it was “more destructive than communism.”