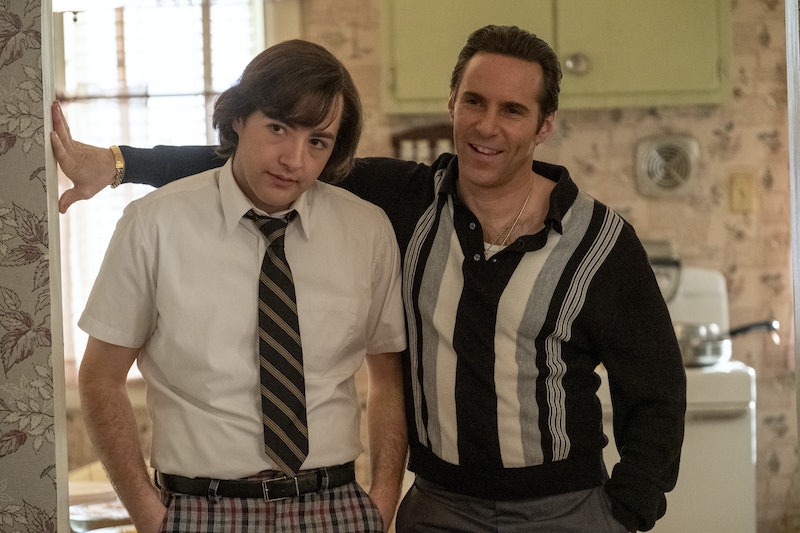 The Many Saints of Newark transports us to Tony Soprano’s childhood in Newark, New Jersey, where Italian mob families ruled the streets and violence was a fact of life. Set in the late ’60s and early ’70s against the backdrop of the era’s racial justice protests, the hotly-anticipated prequel answers some essential questions about the Soprano family’s history.

The story follows Dickie Moltisanti (Alessandro Nivola), Christopher’s father and Tony’s beloved uncle, as he rises through the ranks of the DiMeo crime family. With Tony’s dad, Giovanni “Johnny Boy” Soprano (Jon Bernthal), in prison, Dickie takes young Tony (Michael Gandolfini) under his wing. The Many Saints of Newark lives in the same universe as the 1999 hit series The Sopranos, and offers all the betrayal, infidelity, and bloodshed that the show was known for.

The film, written by legendary creator and showrunner David Chase, also brings back the beloved mafia men audiences came to know so intimately on TV: the always particular Paulie Walnuts, hilarious (and very stylish) Sylvio, the larger-than-life Pussy, and the deeply insecure Uncle Junior. Over the course of the film, there are quite a few covert callbacks to the show. From favorite local spots to enduring insults, here are all the easter eggs you might have missed in The Many Saints of Newark:

The Bullet Through The Beehive Incident

On the way back from the Copa one night, Livia Soprano (Vera Farmiga) gets into one of her awful moods and starts ranting about how horrible everyone is. Johnny takes out his gun and fires a bullet right at her head — specifically, right through her beehive, leaving her hair smoking wildly in the wind. This story was actually mentioned in Season 6, Episode 13 of the show, when Tony’s sister, Janice, and husband, Bobby Baccalieri, are on a trip with Carmela and Tony. Everyone gets a kick out of the story except Tony, who feels the anecdote paints his family as dysfunctional. Spoiler: the Soprano family is extremely dysfunctional.

Would it really be The Sopranos if there was not a scene of a bunch of overly stressed-out men throwing back huge meat-filled subs in the backroom of Satriale’s? The pork store we know and love is back, and looks almost like a time capsule: the same fluorescent lights, the same seasoned meats — but with a different cast of characters this time.

It comes up a few times in the show that Tony once hoped to have a career in the NFL. He was a football player in high school, but the film sneaks in a line from the series that you might remember: “[He] doesn't have the makings of a varsity athlete.” In Season 5, Episode 3, Uncle Junior upsets Tony when he keeps harping on this point. In the film, we learn the insult originates with Tony’s dad, Johnny. No one believed in Tony’s football aspirations when he was in high school, and it remains a sore subject decades later.

In the series, Sylvio (played by New Jersey icon Steven Van Zandt) has absolutely figured out his look: a sky-high, jet black toupee, wild suits, and his signature grimace. But in The Many Saints of Newark, Syl (John Magaro) is freshly balding and still playing around with the right wig. Thankfully, he finds his way eventually.

The film reveals that Christopher and Tony’s relationship has been tumultuous since the very beginning. Every time baby Christopher gets near Tony, he cries. This choice feels like an intentional hint at the conflict to come between the two (which, spoiler, will lead to Christopher’s untimely death). As the old woman who witnesses the scene says, sometimes babies just know things.

In the film, a young Tony stops by Holsten’s, a cute little neighborhood diner, for a chocolate milkshake. The scene feels pretty inconsequential, unless you know the context. This local spot is where the Soprano family meets up in the last moments of the series finale. Tony, Carmela, and AJ all sit in a booth munching on onion rings while Meadow struggles to parallel park outside. As Journey’s “Don’t Stop Believin’” is blaring on the jukebox, Meadow runs into the restaurant. And then with the sound of the bell, the series cuts to black.

More like this
The 'Love, Lizzo' Harry Styles Scene Is Just 1 Moment That Made Fans Feel Seen
By Brad Witter
Everything To Know About 'Magic Mike’s Last Dance' Starring Channing Tatum
By Jack Irvin
Everything To Know About 'The White Lotus' Season 3
By Grace Wehniainen
Here’s Everything Coming To & Leaving Netflix In December
By Jake Viswanath
Get Even More From Bustle — Sign Up For The Newsletter