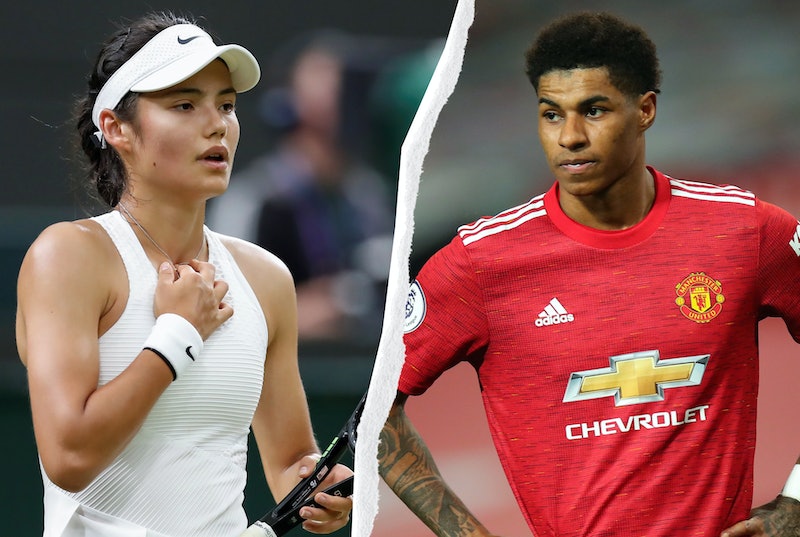 British tennis star Emma Raducanu has thanked fans for their support after she was forced to pull out of Wimbledon this week. The young player suffered breathing difficulties during the fourth round of the tournament which meant she couldn’t continue. Among her well-wishers is footballer Marcus Rashford, who offered up a kind message to the tennis player, tweeting her to say “you should be very proud of yourself.”

No stranger to the pressures of competing on a world stage at a young age, the celebrated footballer and free-school-meals activist shared with Raducanu that he had experienced something similar when he played for Under 16s for England.

“It happened to be playing for the national team in U16s against Wales,” shared the footballer to Twitter. “I remember it to this day. No explanation for it and it never happened again.”

Marcus Rashford, who is currently competing in the Euros Championships, reminded Raducanu that the country is proud of her achievements in the tournament.

He wrote: “You should be very proud of yourself. The country is proud of you. Glad to read your feeling better. Onwards and upwards.”

A thankful Raducanu responded, “Thanks so much for the kind words, this message means a lot to me. I’ll keep building and be back stronger!”

Following the post, Rashford was praised for his ongoing “empathy” and “compassion”, with fans tweeting that the footballer was, yet again, “the kindest and most decent person around.”

Rashford’s tweet comes after Raducanu received a mixed response to her decision to retire from the tournament. Some of the harsher criticisms came from Piers Morgan, who tweeted that Raducanu “couldn’t handle the pressure & quit when she was losing badly.” Morgan was soon called out by the likes of Andy Murray and Gary Lineker.

The young tennis player had been enjoying a brilliant run at this year’s Wimbledon before her heated match against Australia's Ajla Tomljano. In a statement posted to Twitter, Raducanu explained that after the first set and “super intense rallies” she started to breathe heavily and felt dizzy, before being advised to stop the game. In the post, she added, “I wanted to win so badly for you!” before thanking her team, family, and friends.

More like this
The David Beckham Qatar Controversy, Explained
By Sophie McEvoy
Mollie King & Stuart Broad Just Shared The First Pic Of Their Baby
By Sophie McEvoy
Romeo Beckham Shared A Sweet Farewell Note From “Proud” Sister Harper
By Sam Ramsden
'Waterloo Road' Is Back, With More Than A Few Familiar Faces
By Sam Ramsden and Vivian Iroanya
Get The Very Best Of Bustle/UK