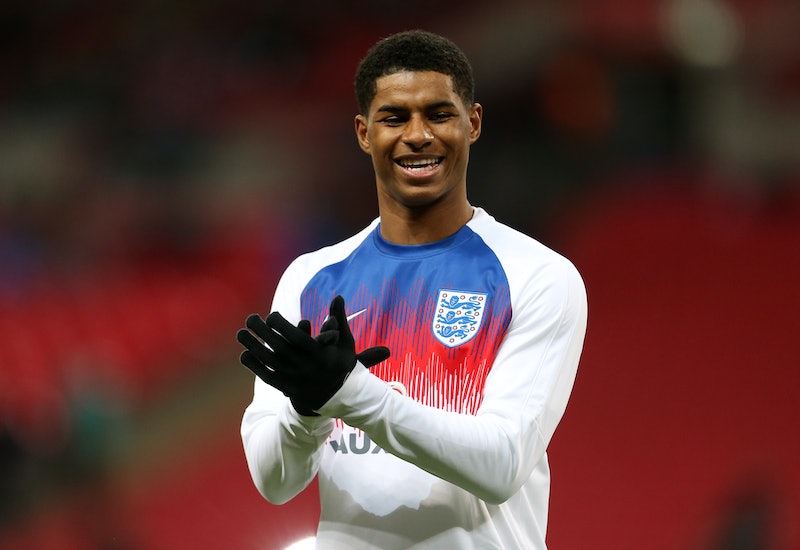 Is there anything Marcus Rashford can’t do? The footballer and anti-poverty campaigner is adding a chef collab to his already impressive list. As reported by BBC News, Marcus Rashford is teaming up with chef Tom Kerridge to inspire young people to get cooking.

Joining forces with the Michelin-starred chef Kerridge, Rashford is launching Full Time, an project that offers free recipes and healthy eating tips through weekly “how-to” video lessons on Instagram. Recipe cards will also be made available in supermarkets, schools, and food banks. Though aimed at lower-income families who might have a busier work schedule and lack expensive kitchen appliances, Full Time is “for everyone,” notes Rashford. “It doesn’t matter your background or your situation. Spending that time with an adult in the kitchen is a period when you can be together, you can have fun, while still being productive.”

Per the Guardian, the 52 Full Time recipes are said to be nutritious, filling, affordable, and can be made with both accessible ingredients and standard kitchen gadgets. Each featured recipe will be released every Sunday morning for the next year on the Full Time Meals Instagram page and cost between 25p and £1 per portion.

Teasing the selection of Full Time recipes, chef Kerridge named his "ultimate fish finger sandwich" as one of the standout meals to look out for. Speaking to BBC Breakfast's Sally Nugent, Rashford also revealed some of his own favourites, naming a hash brown-based dish and peanut butter-sauce stir fry as a couple of other highlights from the recipe range.

Similarly to Rashford, Kerridge has also had first-hand experience with relying on free school meals as a child. Discussing his new collaboration with the footballer, the award-winning chef explained that Full Time is not aimed at his “usual foodie” audience. “It isn’t [about] making tagines or braising beef brisket,” he added.

Elsewhere, Rashford is still unapologetically pressing ahead with his campaign against food poverty in the UK, despite backlash from some who claim the issue of food poverty is being exaggerated. “Is it fair if people go hungry? No, it's not fair. Whether it's a child or an adult, it doesn't change the fact that it's unfair if somebody goes to sleep without eating a meal,” the Machester United star recently commented.