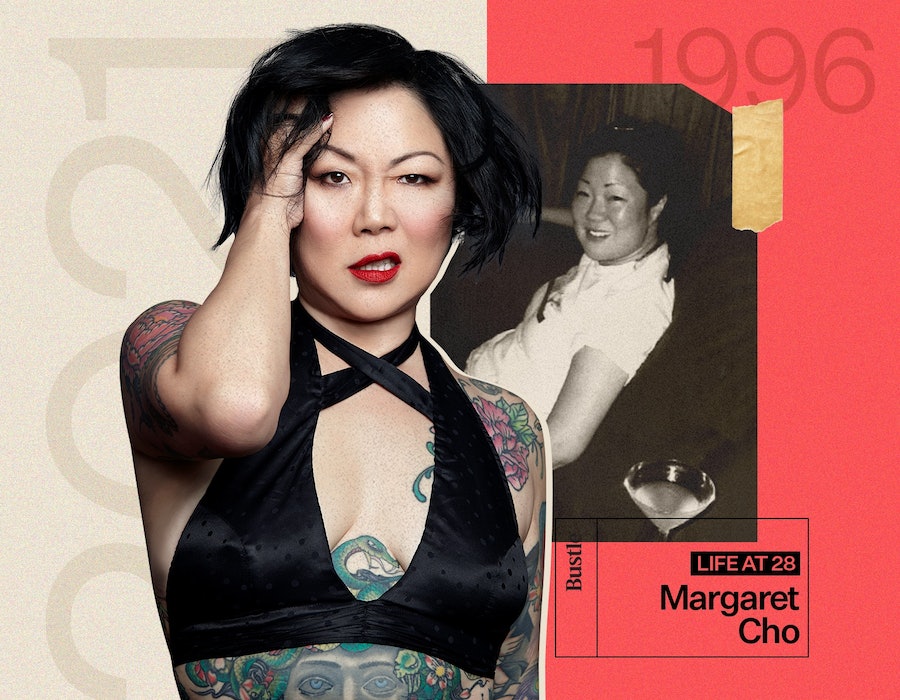 In Bustle’s Q&A series 28, successful women describe exactly what their lives looked like when they were 28 — what they wore, where they worked, what stressed them out most, and what, if anything, they would do differently. Here, stand-up comedian and actor Margaret Cho talks body image, embracing her Korean identity, and the joy of being alone.

As a woman who built her career joking about race, gender, and sexuality at a time when Asian women were expected to be quiet, Margaret Cho knows she's considered a trailblazer. But it certainly didn't feel that way when she was starting out. "I was always in the wrong time — too soon or too early," the 52-year-old comedian tells Bustle. "I was there at the front line [helping to create more space for Asian creatives], and sometimes when you're first you suffer the most because people don't really recognize what you've done."

The San Francisco native began performing stand-up at 16 in a club above her parents' bookstore. By the '90s, she was the most prominent — and for many audiences, the only — Asian woman in front of the mic, paving the way for later comedians like Awkwafina and Ali Wong. She starred in 1994's All-American Girl, the first and only Asian American family sitcom to exist until 2015's Fresh Off the Boat; got nominated five times for a Best Comedy Album Grammy, did over 10 comedy tours, and guest-starred on numerous shows — including 30 Rock, where her role as Kim Jong-Il nabbed her an Emmy nomination.

Cho's latest gig is hosting "After Hours with Margaret," a Valentine's Day special on RushTix in which she'll dole out sex and dating advice. "I used to fret over not getting a call back, or not getting whatever I needed from this partner or that partner," Cho says. "Through menopause, I've really figured out who I really am."

But at 28, Cho was less certain. All-American Girl had just been canceled after a single season following backlash from the Korean American community, and she was struggling to feel confident in her own skin. Below, Cho reflects on body image, her relationship to Korean culture, and that time Harrison Ford spilled a full glass of wine on her.

I was living in L.A. right underneath the Hollywood sign and had adopted my first dog, a big Shepherd mix named Ralph (pronounced Rafe). I wore really huge platform shoes and lived in a two-story house.

I had so much anger and dissatisfaction about being curvy. This was the '90s, and the body types for women were so unattainable. I spent a lot of the time hating my body and being angry at myself. For that reason, I never took photographs unless they were photographs for work. I had no feelings of wanting to preserve myself for my future self. [That period of my life] is only made up of other people's images. Now I look back and I'm really sad, because I was such a beautiful girl and I never appreciated it.

It's particularly hard to love your body when you're an Asian woman, because we have such strict limitations about how a woman should look.

It's very loaded. The stereotype is an Asian woman is supposed to be petite and not take up too much space. We're really encouraged to blend in and be this exoticized version of ourselves, which I think is really unfair. But it's cultural. There's a lot of aspirational whiteness. A lot of the women in my family have had the double eyelid surgery, or if you're born with a double eyelid, you're considered set. The body is such a commodity in our culture. People always comment on your weight. It's a very shameful thing to take more than your share or take up more space. But now I realize that you're entitled to that space. You can take up as much space as you want.

Comedy is a notoriously difficult field to break into, but I imagine that's especially true when you're both a woman and Asian. How were you feeling about your career when you were 28?

At the time, I was actually very happy because I really loved stand-up comedy, and that was an era where I was really active in that part of my work. Being a nightclub comedian and doing shows every day was really fulfilling. As a comedian, nobody told me how I should look or how I should be.

I got to go to New York and do a big show off-Broadway. I remember [Vogue editor] André Leon Talley would come and sit in my dressing room. Janeane Garofalo and Amy Poehler would come over. There was a lot of excitement around my comedy, because I was sort of an outsider within Hollywood, in a sense, because I was Asian American and just different-looking and different-sounding.

Being around all of those successful people, did you have a clear idea in your head about what you wanted your career trajectory to be?

I could never really be clear because I never saw Asian people in anything at that point. I wasn't going to be a Mighty Morphin Power Ranger, and someone was already Chun-Li. So I was like, "OK, well, I don't know what the next chapter is going to be, but I can do comedy." That was really the entirety of my life. There was very little in the way of career opportunities, at least as far as I could see.

At one point, I had written a film that I wanted to get made. But it was that era of '90s filmmaking where everybody was making independent films, and you had to have so much ambition to get there. It seemed very male and very impenetrable and hard to even picture breaking in. But I got to meet a lot of great people, and that period was very much about seeing celebrities in person who you rarely saw outside. There wasn't social media, so you only saw them with your own two eyes and I was always impressed. I went to Carrie Fisher and Penny Marshall's joint birthday party and Harrison Ford spilled a whole glass of wine on me.

Did being in such a white and male-dominated space discourage you, or did it drive you to want to succeed more?

But race definitely came into play in TV and movies. Even though I had TV roles here and there, it was still very hard. We thought we had some kind of arrival after Joy Luck Club and my TV show All-American Girl, but there was no real Asian presence until much later.

Speaking of All-American Girl, what effect did its cancellation have on you?

It was really depressing because I had thought, "OK, well now Asians will actually be able to do more projects and I'll be able to do more," but it didn't happen. It was almost like TV moved away from racial diversity. So I went deeper into being a stand-up comedian. I had made a little bit of money and built a presence, but I still had to work very hard to get a following and get more work.

You mention in your autobiography that around this time you struggled with substance misuse. Did you ever consider quitting comedy?

I've had a drug and drinking problem my entire life, and it had nothing to do with the nature of my career. It could be conveniently explained away by, "Well, my TV show was canceled," and that actually did fling me into a very negative time. But when I was 28, I was clean because I had learned my lesson.

I did fall back into it some years later. I have a long familial history with depression and suicide, and Asians just generally don't seek assistance for mental health. But fortunately, about five years ago, I spent time in and out of institutions that helped me get sober and deal with all of these addictions. Now I'm committed to that, but at 28 I was lucky because I was free of that. I was really on a high from doing comedy. That was my main drug of choice, and it still is.

Today you’re known for being outspoken about issues surrounding race, sexuality, and gender. Did you feel as comfortable speaking your mind about those things at 28?

Yes, I've always felt very comfortable about that because I was never "the pretty girl." Any time I was in a new school or new social environment, I would make friends with the prettiest girl and I would be like her lawyer or agent. I would be the girl that the handsome guy would talk to because he was too scared to talk to the beautiful girl.

But at some point I realized I don't want to be anybody's rep. So it was important for me to talk about being sexual and having those experiences in the body that I was in, because I wanted to show the truth to people. I wanted to show that you can have a life that is sexual, vital, and beautiful even if you're not traditionally beautiful or whatever that ideal is supposed to be.

You've mentioned in the past that some Korean and Korean Americans were pretty vocal about not liking your comedy. Did that affect your approach at all?

No, because I was so removed from my Korean identity at the time. A lot of that dissent happened around when I was doing All-American Girl, and when I look at the historical context now, it makes sense to me. The show premiered after the Rodney King riots, [during which over 2,200 Korean-owned businesses were destroyed or damaged]. The Korean community was so protective about their public image because the last time they'd been on TV, it was on the rooftops of their buildings in Koreatown with rifles. My comedy at that time was very queer, and I was being very crude. So there was this thought of, "She's not a doctor. She's not a professor. She doesn't speak Korean. This is not how we want to be portrayed or seen."

I remember I got into this argument with a reporter at the LA Times who was very offended that I didn't make a point of contacting her. It's this kind of thing called "nunchi," respect for elders, and I didn't have a sense of that. I really regret it. Now I understand how important it is for younger people to make gestures towards the older generation, especially in America because of all of the things that generation went through: unimaginable racism and having to break through so many barriers to get to any position. And now I speak Korean! It took me 50 years to get there, and it's taken me all this time to really come to a place of real respect and joy around my culture.

What do you think your 28-year-old self would think of your life now?

I think I'd be really happy because I don't have this nasty sadness or depression that I used to have. I don't have the fears that I had of, "I'm gonna be 50 and alone." I am [alone], and I'm actually awesome. I really like sleeping in the very middle of the bed. I really love adopting as many animals as I want. I can watch what I want on TV and eat what I want at any time I want. I can sleep in whenever. I feel really good about that. Women are always told, "Oh, you're gonna die alone," and that's supposed to be some kind of cursed existence. But I think it's great.