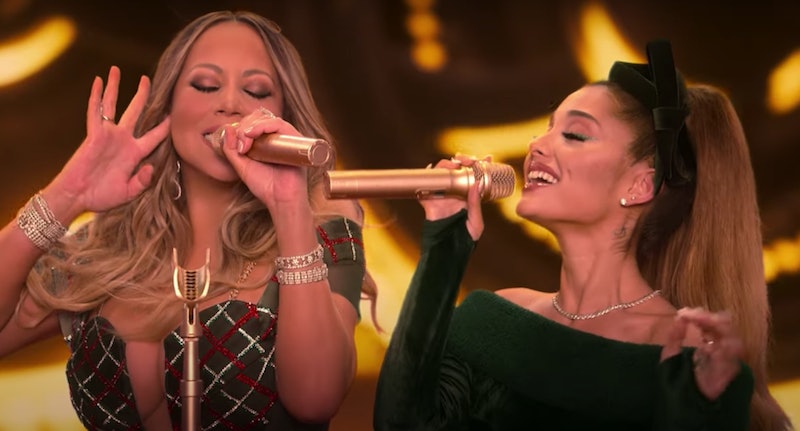 Christmas Queen Mariah Carey just gifted us the ultimate holiday treat: a remix of her 2010 song "Oh Santa!" featuring Ariana Grande and Jennifer Hudson. The elusive chanteuse enlisted the vocal powerhouses for the remix for Mariah Carey's Magical Christmas Special, which was just released on Apple TV+. The rendition has broken the internet — and probably some glass, too, as Carey and Grande's whistle note segment has generated so many memes and reactions due to their impressively high vocal ranges.

Toward the end of the song, Carey and Grande harmonize the whistle notes as elves dance around them. Fans on Twitter have since reacted to the moment accordingly, unanimously agreeing that the remix has saved the holidays during this very uncertain and turbulent year. For what it's worth, it's what Carey intended all along. "We can't just let the bleakness of the current place we are at in the world foil all of the extra fun things that we do every year," she told Billboard in an interview ahead of the special's Dec. 4 debut.

Regarding the "Oh Santa!" remix, Carey revealed that she approached the rendition from a producer's perspective. "It was like, how do I see this as a producer?" she said of reworking the track. "How do I see these vocals having different textures?" The result was a performance that, to her, felt like a "girl group moment." And when fans heard the sheer force of her and Grande's whistle tone moment, they immediately took to Twitter to share their thoughts.

Others noted that the remix has now single-handedly saved the holidays (and perhaps even contributed to the fight for world peace, too).

More like this
Everything To Know About Taylor Swift’s 10th Studio Album, 'Midnights'
By Grace Wehniainen and Jake Viswanath
How Ghosts Inspired Kesha’s New Music
By Jake Viswanath
Beyoncé’s Special Tribute To Sister Solange Was Both Touching & Hilarious
By Stephanie Topacio Long
Lizzo Twerks While Playing James Madison's 200-Year-Old Crystal Flute Onstage
By Radhika Menon
Get Even More From Bustle — Sign Up For The Newsletter