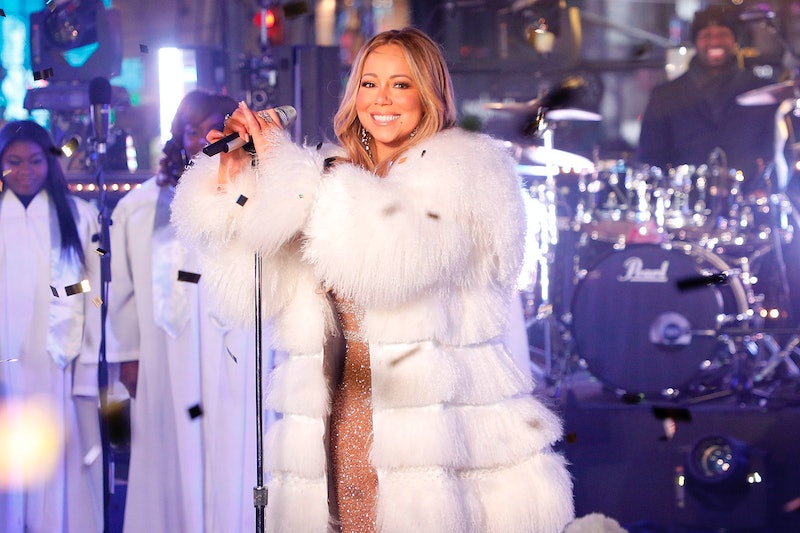 It’s that time of year again: The reigning Queen of Christmas is once again spreading holiday cheer, and this time she recruited her kids and her dogs to help her do it. On Sunday, Dec. 21, Mariah Carey shared a video of herself on Instagram singing her iconic hit, “All I Want For You Christmas Is You,” while surrounded by a Christmas tree, poinsettias, loads of twinkly lights, and most importantly, her family.

After appearing in a stunning red gown to belt out “All I want for Christmas is,” Carey’s 10-year-old twins, Monroe and Moroccan, jumped in to help their mom finish the lyric. “YOU!” they shouted into the camera. Their big finale was so electrifying that even their two dogs, who were dressed in festive red sweaters, started spinning around and howling — er, harmonizing.

This isn’t the first time that Carey’s kids, who she shares with Wild ‘N Out host Nick Cannon, have been featured in one of her epic Christmas surprises. Last month, Moroccan and Monroe appeared alongside their mom in the “Fall In Love At Christmas” music video, which premiered on Nov. 5. The song is a holiday collaboration that Carey did with Khalid and Kirk Franklin.

As Mimi’s die-hard fans know, she truly thrives during the holidays. And every year, she finds new and creative ways to remind her fans and followers that she’s Christmas royalty. Last month, for example, she teased the start of the holiday season with a video on social media of her smashing pumpkins with a candy cane baseball bat and swapping out Halloween decor for ornaments and Christmas gifts.

Last year, “All I Want For Christmas Is You” broke Spotify’s record for most single-day streams with a whopping 17.223 million. This year, the track made an unprecedented return to the Billboard Hot 100 chart as the first song in the chart’s history to hit No. 1 three separate times. The track was originally included on Carey’s Merry Christmas album in 1994 but didn’t peak on the Hot 100 until 2019.

In a recent interview with the UK’s The Mirror, Carey spoke candidly about why Christmas is so important to her. “I always wanted Christmas to be perfect and looked forward to the holidays, but I had this incredibly dysfunctional family that would ruin it,” she said, adding that her mom would “try to make it fun.” “We didn’t have a lot of money, so sometimes she’d wrap up fruit because it was all she could afford. I was like, ‘When I grow up, I’m never going to let that happen. I’m going to make Christmas perfect, every year.’”

More like this
The Jonas Brothers' New Album Has A Very Meta Name
By Alyssa Lapid
Jameela Jamil Defends Sam Smith After Trolls Body-Shamed Them
By Jake Viswanath
Austin Butler Recalls Lisa Marie Presley Showing Him Elvis’ Bedroom
By Jake Viswanath
Katy Perry Regrets Not Working With Billie Eilish On “Ocean Eyes”
By Alyssa Lapid
Get Even More From Bustle — Sign Up For The Newsletter
From hair trends to relationship advice, our daily newsletter has everything you need to sound like a person who’s on TikTok, even if you aren’t.