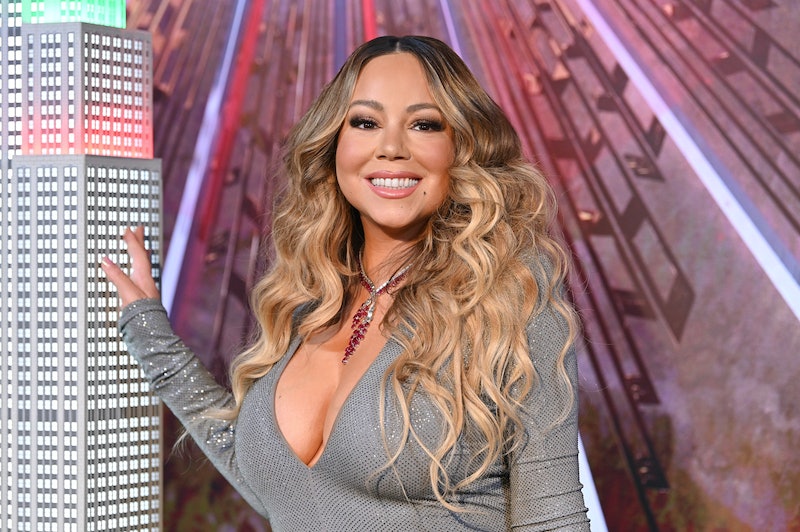 Mariah Carey is a woman of many talents and titles — Grammy-winning singer-songwriter (with a record 18 number one hits), Queen of Christmas, actor, and with the release of her new memoir, author. However, if her record label hadn't put a stop to it in the mid-'90s, she also would've been the lead singer of your favorite indie-rock band. In her new book, Mariah Carey reveals that she secretly recorded a '90s rock album. And luckily for the Lambily, her mysterious album might actually get released soon.

Taking to her Twitter account on Sunday, Sept. 27, Carey teased an excerpt from her new memoir, The Meaning of Mariah Carey, in which she wrote about the "alternative album" she recorded while making her classic 1995 record Daydream. Per the teaser clip, she wrote hits like "Always Be My Baby" during the day, and became an indie rocker at night. The singer teamed up with her friend Clarissa and her longtime backing band to create her rock band alter-ego Chick. She even teased a snippet from the original recording sessions, with Clarissa on lead vocals. And while she wrote that she made the album "just for laughs," she admitted that "it got me through some dark days."

After fans started freaking out and demanding to hear the project, Carey returned to Twitter the following day to announce that she was doing everything in her power to release it — but first, her team has to actually find the whole thing. "Now that you've listened to Clarissa's kick-ass lead vocals, I can tell you that I'm on a quest to unearth the version of this album with my lead vocals and will not stop until we find it!," she announced. "So happy that we get to experience this together lol!"

On Monday, Carey revealed a bit more about the secret album during her interview on The Late Show with Stephen Colbert, saying that she also designed the artwork for the Chick record, which was tentatively called Someone's Ugly Daughter — a perfect title for angsty '90s teens. "Because [alt-rock] was such a popular genre at the time, I was like, 'Well, I have a full band here, let’s just do something and I’ll just make up some nonsense and sing it'," she explained.

Carey actually planned to shoot a Chick music video, disguised in full costume, just to see if the public would recognize that it was her singing. However, that scheme was shut down by her record label. “I kind of had to abandon the project,” she told host Stephen Colbert. “But I’m kind of happy that, at this moment, the fans are actually hearing it. Because it’s me doing an accent, doing an imitation of someone that I created that doesn’t actually exist.”

More like this
Prince Harry Incorrectly Recites Christina Aguilera’s “Genie In A Bottle” Lyrics
By Jake Viswanath
Olivia Rodrigo Manifested Finally Meeting Demi Lovato
By Jake Viswanath
Taylor Lautner Thought Taylor Swift's 2009 VMAs Interruption Was A "Skit"
By Alyssa Lapid
The Jonas Brothers' New Album Has A Very Meta Name
By Alyssa Lapid
Get Even More From Bustle — Sign Up For The Newsletter
From hair trends to relationship advice, our daily newsletter has everything you need to sound like a person who’s on TikTok, even if you aren’t.