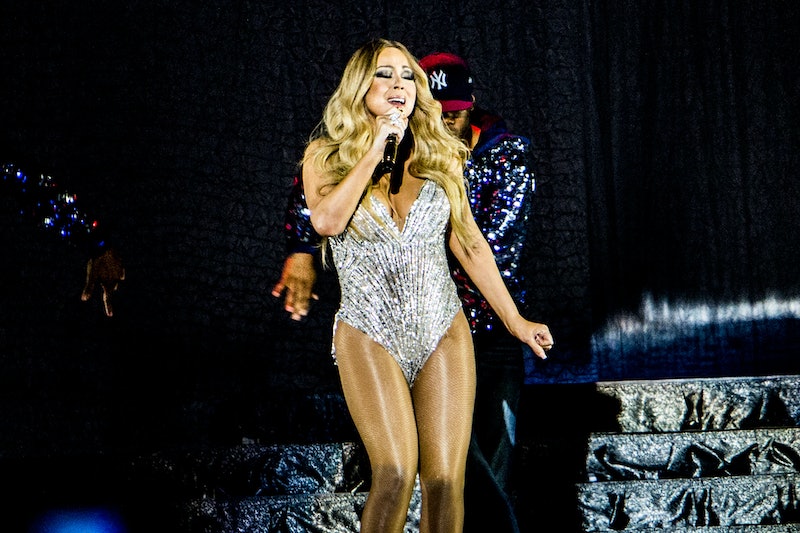 As any Schitt's Creek devotee knows, the one thing that creator, writer, director, and actor Dan Levy (and his character, David Rose) loves more than the show itself is Mariah Carey. Apparently, the respect is mutual. Mariah Carey responded to Dan Levy's Emmy wins for Schitt's Creek in what has become a total full circle moment.

At the 2020 Emmys, Levy took home multiple awards in a row in the comedy category, including Best Writing, Best Directing, and Best Supporting Actor in a Comedy Series, before Schitt's Creek went on to win the big prize for Best Comedy Series. After his many wins, Carey took to Twitter to acknowledge Levy's big night and reference one of the show's sweetest moments. "Congrats @danjlevy!!!," she wrote. "You'll always be my David Rose," she sweetly proclaimed. The tweet was a nod to Patrick's wedding vows to David on the series finale, which was simply the chorus from Carey's '90s smash hit "Always Be My Baby," in tribute to David's favorite musician.

Levy has not yet responded to Carey's tweet (most likely due to being too busy celebrating his wins), but if his previous reaction to Carey crashing the Schitt's Creek reunion during YouTube's Class of 2020 ceremony is any indication, he's lying on the floor in shock right now.

This is not the first time that the singer has proclaimed her Schitt's Creek fandom. Aside from crashing the reunion, Carey was a blubbering mess like the rest of us watching David and Patrick's wedding on the series finale, especially when Patrick sang his vows. She retweeted a video of the scene, writing "Spoilers!!!! But... OMG!!!," complete with approximately 11 crying emojis. It's indicative of how fans felt on that night, as well as watching the Schitt's Creek crew take home a record-breaking nine awards on Emmys night.