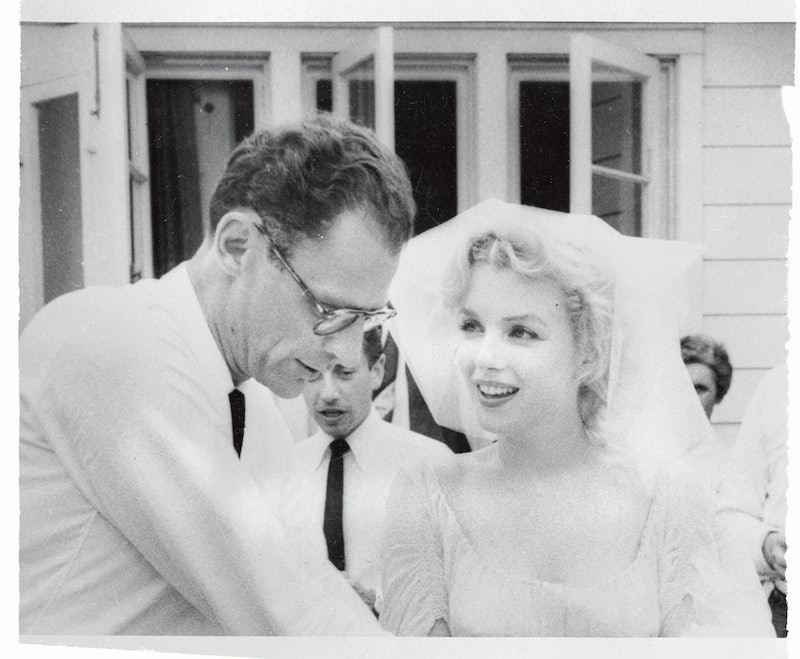 Nearly 60 years after Marilyn Monroe’s untimely death, people are still looking into the circumstances surrounding the star’s demise — most recently in The Mystery of Marilyn Monroe: The Unheard Tapes, Netflix’s latest documentary.

Directed by Emma Cooper, the feature-length documentary attempts to piece together the final weeks of the blonde bombshell’s tumultuous life. It features audio recordings from those who knew Monroe, including Some Like It Hot director Billy Wilder and actor Jane Russell. Until now, many of these tapes have yet to be heard by the public. “[Monroe is] just an extraordinary icon,” Cooper said in an interview with Netflix. “She's a much more relatable woman than anybody has really given her credit for. She's not just the person that stands on the air vent and looks pretty ditzy. There is a lot of pain and there's a lot of strength in her.”

But the documentary also recounts Monroe’s life story, including her major romantic relationships. The actor was married three times, though one of her marriages predated her rise to fame. Her relationships second and third husbands — to Yankee’s star Joe DiMaggio and playwright Arthur Miller, respectively — were highly publicized and are still referenced today.

How much is known about the Gentlemen Prefer Blondes actor’s three ex-husbands? Below, what to know about Monroe’s former husbands.

Marilyn Monroe Married James Dougherty When She Was 16 Years Old

In 1941, Monroe was 15 years old and still a ward of the state, living under the guardianship of a family friend. According to Donald Spoto’s sprawling biography on the Hollywood icon, Monroe first met 20-year-old James “Jim” Dougherty that year. His family lived nearby, and he was described as someone with many talents — football star, amateur stage actor, and student body president are all listed on his resume. She’d later refer to him as “a dreamboat.” And though Dougherty was also smitten, he was hesitant to pursue a relationship given the age gap. “I noticed she was a pretty little thing, and she thought I looked angelic in white shirts, but she was only a child so far as I was concerned, and five years was a great difference in our ages,” he said.

The following year, Monroe’s legal guardians relocated from Southern California to West Virginia, but could not afford to take her as a ward. The then-16-year-old Monroe married Dougherty on June 19, 1942 to avoid being sent to an orphanage. She dropped out of school to become a housewife, and the new couple first moved to Sherman Oaks, California, and later to Santa Catalina Island when Dougherty was stationed there as a Merchant Marine.

Though married life for Monroe and Dougherty wasn’t a disaster, it wasn’t exactly blissful. “My marriage didn't make me sad, but it didn't make me happy, either. My husband and I hardly spoke to each other,” Monroe said later, as quoted in Spoto’s biography. “This wasn't because we were angry. We had nothing to say. I was dying of boredom.”

Dougherty was deployed to the Pacific and Southeast Asia in 1944, leaving Monroe in the care of his parents. She began modeling around this time, something her husband and in-laws didn’t approve of. Her rising career became a source of tension in the couple’s relationship. Monroe and Dougherty divorced in 1946.

Her Marriage To Joe DiMaggio Was Short And (Not Entirely) Sweet

Monroe met Yankees star Joe DiMaggio in 1952, not long after he’d retired from Major League Baseball. By this point, Monroe had several minor and supporting roles under her belt, including her turn in All About Eve, but had yet to lead a major motion picture. According to Spoto, DiMaggio, who was also divorced, expressed interest in meeting the rising starlet after seeing a published photo of her “posing sexily in a short-skirted baseball outfit, aiming to hit a ball.” After their first date, Monroe later said, per Spoto’s biography, “I was surprised to be so crazy about Joe. I expected a flashy New York sports type, and instead I met this reserved guy who didn't make a pass at me right away. He treated me like something special.”

As Monroe’s and DiMaggio’s relationship grew, so did attention from the press. The pair married on January 14, 1954, in a small ceremony in San Francisco’s City Hall. However, despite sharing an initial infatuation, their relationship was far from perfect. DiMaggio’s jealousy and controlling attitude stoked conflict between the two, and Spoto reports that the former Yankees center-fielder was physically abusive to Monroe.

The final straw was caused by a publicity stunt tied to the release of Wilder’s The Seven Year Itch, only nine months after their wedding. The infamous “subway grate scene” — during which a gust of air blew up Monroe’s white dress — was filmed with a large crowd of spectators present. Upon witnessing the scene, DiMaggio flew into a rage and physically assaulted Monroe in private later that night. Two weeks later, in October 1954, Monroe filed for divorce.

Following the successes of Gentlemen Prefer Blondes and The Seven Year Itch, Monroe’s fame escalated from movie star to Hollywood Icon. However, during her first meetings with Arthur Miller in the early 1950s, she was limited to supporting parts and having an affair with director Elia Kazan, his friend. However, it wasn’t until Monroe temporarily relocated to New York City in 1955 that the two became involved. Both were still legally married at the time, though their relationship wouldn’t become public until both of their divorces were finalized.

Despite their apparent differences — with one labeled as a sex symbol and the other deemed a communist intellectual — Monroe allegedly knew she’d one day marry Miller. According to Spoto, Monroe told Hollywood gossip columnist Sidney Skolsky in February 1954, a month after her wedding with DiMaggio, about her dreams to marry Arthur Miller. A confused Skolsky prodded her for answers, to which she replied: “You wait. You’ll see.”

When they began dating the following year, those close to Monroe advised her not to pursue a relationship with The Crucible playwright because of his politics; Miller was facing heat as an alleged “Communist sympathizer,” which, in turn, could hurt her career as well. However, being linked Monroe was said to have helped Miller’s image, as an endorsement from a well-liked Hollywood actor boosted his credibility. The two eventually married on June 29, 1956 at a courthouse in White Plains, New York, followed by a Jewish ceremony two days later.

Like with her relationship with DiMaggio, Monroe’s initial attraction to Miller wasn’t enough to sustain a marriage. As Spoto put it: “Marilyn had hoped to find a literary mentor, father and protector in Arthur, but this was an ideal no man could fulfill; for his part, he had wanted her for his tragic muse, his occupation, and he used her fragility as the excuse for his own literary setbacks. She was his artwork faute de mieux.”

There were several attempts to save their marriage, including The Misfits, a film based on Miller and starring Monroe. However, rising tensions on set only made it worse. Unable to reconcile their differences, the pair separated when filming wrapped, and divorced in January 1961.