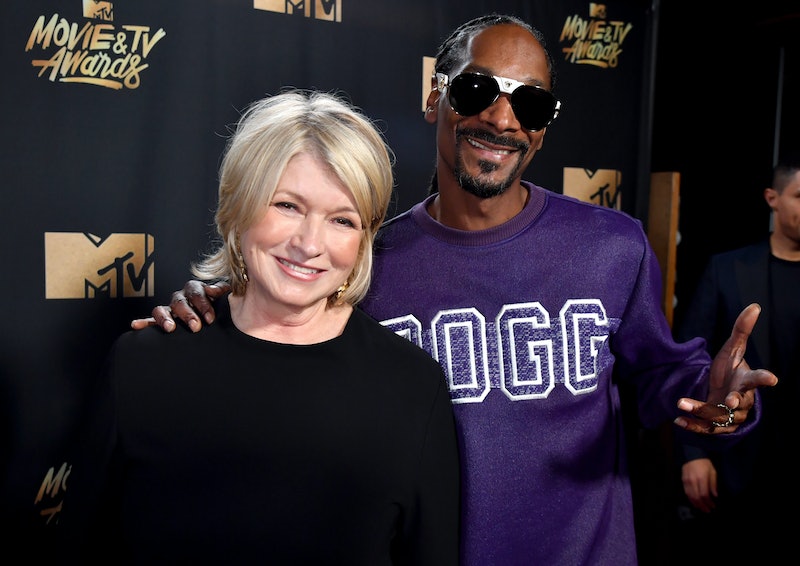 The Super Bowl has been a magnet for celebrities, with everyone from Ben Affleck and Jennifer Lopez to LeBron James making appearances. But nobody seemed to be having as much fun during football’s biggest weekend as lifestyle guru Martha Stewart. On Sunday, Stewart was on hand to co-host the annual Puppy Bowl with Snoop Dogg (with whom she struck up an unlikely friendship in 2008) for the second year in a row. If you’re not familiar with the Puppy Bowl, it’s exactly what it sounds like: the Super Bowl, but with dogs. It’s a perfect match for Stewart and Snoop Dogg’s off-kilter, camp-yet-sincere public friendship. (This isn’t the only time they’ve shared hosting duties: They’ve worked together on multiple baking shows, including last fall’s Snoop and Martha's Very Tasty Halloween, which aired on Peacock.)

But she didn’t limit her enjoyment of the festivities to her hosting duties. Instead, she took full advantage of what the weekend had to offer. She arrived in Los Angeles in style on Saturday, flying in a sleek black private jet. In perfect Martha Stewart fashion, she shared photos of the gourmet, heavy-on-caviar treats she enjoyed onboard on Instagram. “If you gotta go to the @superbowl2022 this is one way to do it !!!” she wrote.

Following her glamorous arrival, she enjoyed LA’s nightlife and fine dining. She had dinner at the exclusive sushi restaurant Nobu Matsuhisa, where she ran into Drake — and snagged a photo, which she also shared on Instagram. She then attended the NFL’s pre-Super Bowl owners dinner, where she enjoyed a performance from Coldplay’s Chris Martin, the evening’s “spectacular entertainer.”

After she was finished with her Puppy Bowl hosting duties, Stewart headed to big game — where she found herself seated next to comedian Tracy Morgan. She looked chic in a camouflage-patterned puffy jacket and chunky gold earrings. On the whole, not a bad weekend!

More like this
The 2023 Super Bowl Commercials Feature A 'Breaking Bad' Reunion & Missy Elliott
By Alyssa Lapid
What Is Mary J. Blige’s Net Worth? The 9-Time Grammy Winner Is Doing “Just Fine”
By Hugh McIntyre
Alicia Silverstone Revives Her 'Clueless' Character In This Super Bowl Commercial
By Jake Viswanath
Dorothy Wang & Morgan Stewart Were The Ultimate BFFs On 'RKOBH'
By Sophie McEvoy
Get Even More From Bustle — Sign Up For The Newsletter
From hair trends to relationship advice, our daily newsletter has everything you need to sound like a person who’s on TikTok, even if you aren’t.