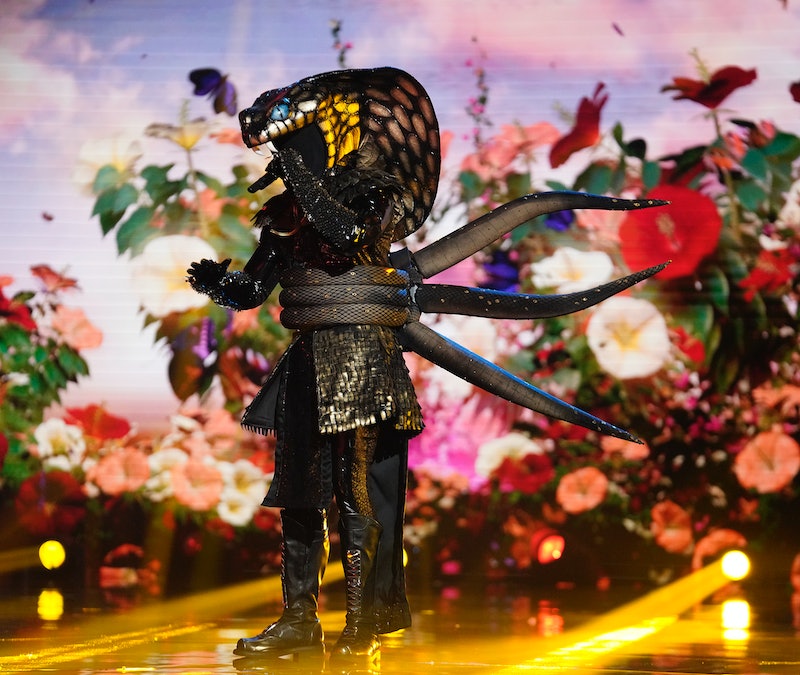 It may be only two weeks into the new season, but Masked Singer fans are already narrowing in on theories about the Serpent. Ahead of the performer's debut on the Sept. 30 episode, the show's official Twitter account posted a video of Serpent singing The Proclaimers' "I'm Gonna Be (500 Miles)" that clearly shows off a professional singing voice. This puts them among the Season 4 stars who have, collectively, sold 281 million records. But viewers needed a few more clues than that to start piecing together ideas, so they looked to the Serpent's intro package.

In it, the person behind the Serpent mask said wearing the costume makes them "feel more powerful and intimidating," giving them "a leg up ... or at least six arms up" on their competition. That's still pretty vague, but they shared another hint that led some fans to think they've cracked the case: "If you want to know how I instantly appeared, here's the prescription number to my identity," they said as an image of a medication bottle with the words "PharMASKy, #31118, Serpentine, Dr Cannon" written on the front appeared alongside them.

What does it all mean? Here are some of fans' most popular theories so far.

Not only does the original Hamilton cast member have similar-sounding vocals, he's left-handed, as the Serpent appears to be, and the 31118 prescription number fits with his career. As one Redditor explained it: "3- Leslie has put out 3 albums! 11- he has been in 11 Broadway/Off-Broadway productions (including workshops) 18- he’s done broadway from 1998-2016!"

Other interpretations of the number pointed to a Bible verse, specifically Romans 3:11-18, which Paul the Apostle narrated. Perhaps not so coincidentally, Odom's first Broadway role was Paul in Rent, which could explain why it accompanied the line about how Serpent "instantly appeared."

Despite all the evidence pointing to Odom, many Twitter users couldn't ignore how much Serpent sounds like 17-time Grammy-nominated musician Brian McKnight. Still, they all agreed they need more clues before making a call.

Others thought Serpent's voice wasn't quite soft enough to be McKnight, instead offering that Wanya Morris from Boyz II Men — a group that has sold more than 34 million records worldwide — better fits the description.

The Masked Singer panelists have falsely guessed Jamie Foxx before, but some Twitter users think he could finally be on the show.

More like this
Kanye West Apologizes To Kim K "For Any Stress I Have Caused" In Rare Interview
By Jake Viswanath
Jason Derulo Is Launching A New Singing Show In The UK
By Maxine Harrison
20 Years Later, Kelly Clarkson & 'American Idol' Judges Reunite For Her Hollywood Walk Of Fame Star
By Radhika Menon
Confusion Reigns After Kanye Changes His Instagram Profile Pic To Kris Jenner
By Jake Viswanath
Get Even More From Bustle — Sign Up For The Newsletter