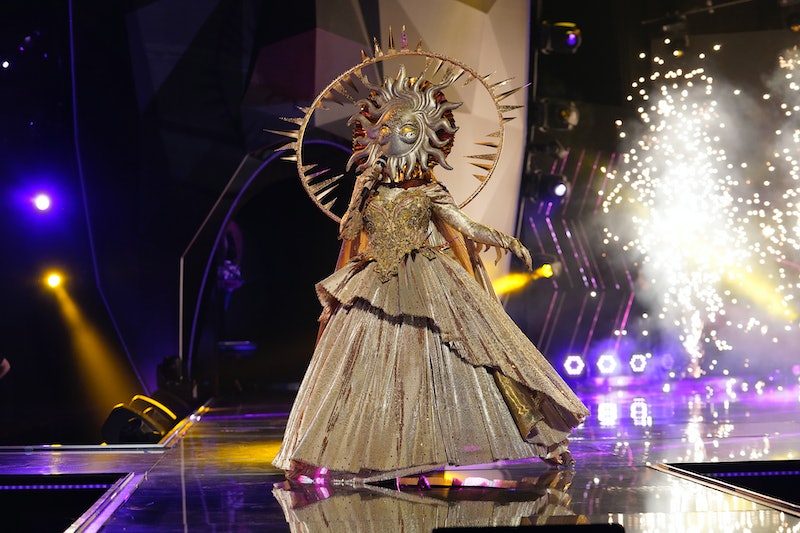 We're now several weeks into The Masked Singer Season 4, and the clues, theories, and spoilers are really starting to pile up. Among the celebrities unmasked so far are Busta Rhymes (Dragon), Mickey Rourke (Gremlin), and Brian Austin Green (Giraffe). And as the remaining singers from Groups A, B, and C enter the finals, viewers are racing to figure out who's behind the other masks. If you're having trouble keeping up, here's everything you need to know.

There were 16 costumes in total this season, including Mushroom, Crocodile, Sun, Popcorn, Squiggly Monster, Lips, Jellyfish, and Watchamacallit.

Fox previously teased that the contestants have a combined 46 Grammy nominations and 23 platinum records. The network also confirmed that there's an Olympic gold medalist as well as 10 Hall of Famers in the cast, meaning that fans can expect a mix of professional singers and athletes with a few wildcards thrown in. See a breakdown of all the individual clues and theories for each costume below.

The Dragon, aka Busta Rhymes

During the Season 4 premiere, Rhymes was unfortunately the very first contestant to be unmasked, but he still had a blast performing. "I think that we have a duty to make sure that we remind people of how important it is to fight the good fight for what's right, but in the process, still being able to enjoy what living is all about," he told Entertainment Weekly after being eliminated. "Being able to have fun, laugh, love and learn and enjoy yourself is what allows you to be able to continue to recharge when you're being drained by the perils in the world on a day-to-day basis."

The Gremlin, aka Mickey Rourke

In a Masked Singer first, the Gremlin self-eliminated after a performance of "Stand By Me," revealing the man behind the mask: actor Mickey Rourke. He took off his own mask before voting even began because he was too "hot" under his furry costume.

The Giraffe, aka Brian Austin Green

After a cover of Kool and the Gang's "Get Down on It," the Giraffe was eliminated at the end of Episode 3, revealing none other than 90210 star Brian Austin Green.

In a final reveal that none of the panelists saw coming, Baby Alien turned out to be — drumroll, please —retired quarterback Mark Sanchez. The former football player was eliminated after a cover of Imagine Dragons' "It's Time."

Lips paid homage to the Big Apple with a rendition of Odyssey's "Native New Yorker," but it wasn't enough to advance. The unmasking unveiled none other than talk show host Wendy Williams, a prominent theory among fans from the start.

Squiggly Monster faced elimination after a cover of “(I Can’t Get No) Satisfaction” by The Rolling Stones, then unexpectedly himself to be Full House alum and comedian Bob Saget.

The Snow Owls performed a duet of Andrea Bocelli and Celine Dion's "The Prayer" — and even shared a kiss onstage, further fueling theories that the two are a couple. Once eliminated, the owls were revealed to be country singers Clint and Lisa Hartman Black.

Stay tuned as more clues, theories, and celebrities are revealed.

This article was originally published on Sep. 13, 2020