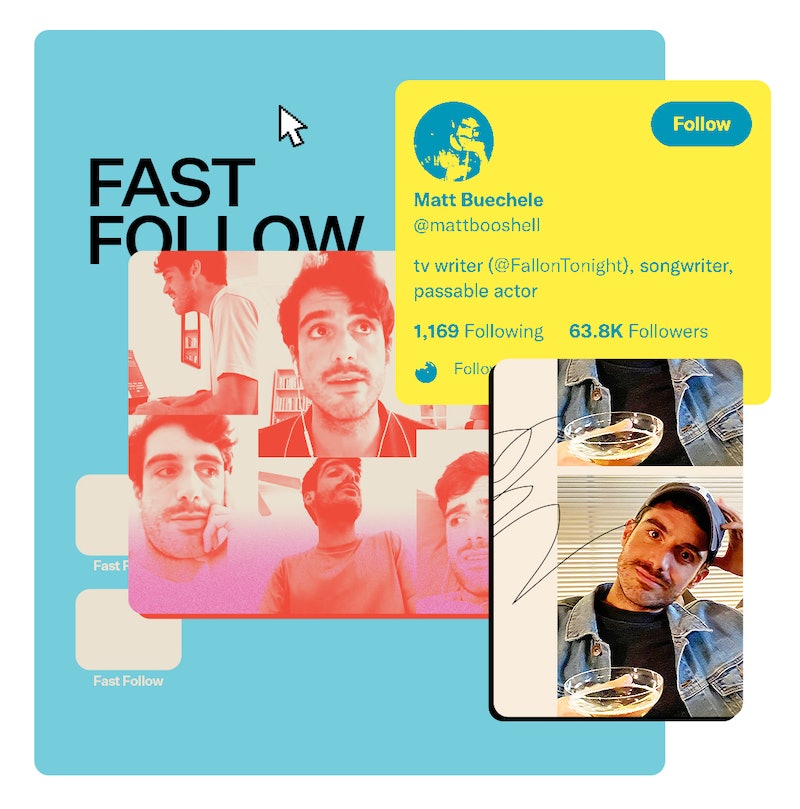 Matt Buechele’s videos have been known to incite a strong reaction from the ladies on the internet. Tweets like, “my bf wouldn't appreciate this tweet but id marry this man,” or “Happy Valentine’s Day to Lakeith Stanfield only” followed by, “I changed my mind, happy Valentine’s Day to @mattbooshell also,” are emblematic of the kind of feedback the 31-year-old comedian gets online. But Buechele knows a more specific demographic really rides for him. “Married women, that’s my wheelhouse,” Buechele tells Bustle. “They love my concept.”

The concept is good-natured, often musical takes on benign but delightful topics like the ideal amount of people for a dinner hangout (4 to 6) or what the two types of LCD Soundsystem songs sound like (lyrics include, “Brooklyn... I’m dating the borough”). Though Buechele has been doing stand-up and improv in New York for over a decade, it wasn’t until his late 20s that he quit his job in ad sales and committed to doing front-facing camera comedy full-time. “Very early on, I made a video parodying Broadway musicals. Back then I probably had a thousand followers [on Twitter]. I remember that overnight I gained several thousand followers because it got a retweet from Mindy Kaling,” says Buechele, who now has roughly 63,000 followers on Twitter. “It was definitely the first time where I was like, ‘Oh, keep doing this [kind of thing]. Lean into this.’”

In 2020, while Buechele’s comedic predecessors like Bo Burnham were putting out specials about how lockdown had exacerbated their mental health, Buechele was finding the much-needed levity in the crisis’ more mundane moments: the smalltalk we were all making at our first social gatherings; the ever-changing CDC guidelines. The videos got him noticed by another good-natured, often musical comedian: Jimmy Fallon. That connection ultimately led to a staff writing gig on The Tonight Show. “The internet, man. It's amazing,” Buechele says.

I was reading the Wikipedia for Jack and the Beanstalk because I was trying to figure out if the giant says something other than, "Fee-fi-fo-fum." I thought he had more to him, but that's kind of his whole shtick. I was trying to find more tropes about giants [for a joke] and that’s where I went.

Great community on Jack and the Beanstalk Wikipedia, though. Then I was on B-flat major scale [Wiki] because I’m a musician but I’m not that good of a musician.

There's these two guys that I've never met and they do a thing called Podcast But Outside. They're in LA and have a table set up where they just interview people as they come by. It always cracks me up because they do a really good job editing their little interviews.

Julia Louis-Dreyfus. Then an interaction that I got a kick out of recently is I did an impression of Fred Armisen and he somehow found it and he commented and was like, "This is brilliant." I was so flattered and embarrassed at the same time, because it's such a goofy video.

On Instagram it would probably be an overly filtered photo of a beer. Actually, it’s a photo of the Brooklyn Bridge from the Brooklyn side. It's very blurry and oversaturated. You can tell I was playing around with all the stuff on Instagram. [It got] 11 likes. I'm proud of it, you know?

Has anyone ever slid into your DMs?

I posted a photo that wasn't like a thirst trap. It was just a photo of me, full profile. And this guy DMed me like, "Hey, bro. What's up? What's your weight? I think you're my exact goal weight.” It was so immediately obvious that he wasn't trying to be weird. So I told him [my height and weight]. We were talking for a little bit and now he’ll just DM me like, "How's your fitness, king?" Or if I post something about going for a run he'll be like, "Get after it, king."

More like this
Annie Rauwerda Finds Treasure In The Depths Of Wikipedia
By Chloe Foussianes
Twitter Can’t Believe The Madonna Biopic Is Scrapped & Fans Have A Solution
By Alyssa Lapid
Twitter Is Divided Over Madonna’s Controversial 'Vanity Fair' Cover
By Alyssa Lapid
Twitter Is Panicking Over Panic! At The Disco Breaking Up
By Radhika Menon
Get Even More From Bustle — Sign Up For The Newsletter
From hair trends to relationship advice, our daily newsletter has everything you need to sound like a person who’s on TikTok, even if you aren’t.