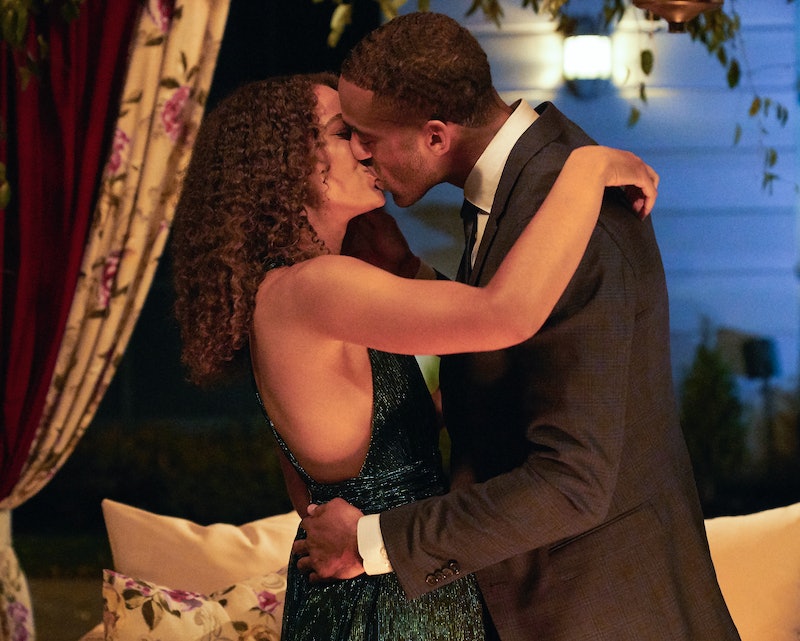 The internet has been roasting Matt James' for weeks about kissing with his eyes open. But on the Women Tell All, his contestants — you know, the ones kissing him — finally got the chance to confront him about it. It marked the first time they unanimously agreed on anything. Survey says: eye-open kissing is weird.

“It was shocking," Pieper James, who was the only one who brought up Matt's habit to him on the show, said of discovering his affinity. Jessenia added that she also once took a peek and that it definitely caught her off guard. After that, Chris Harrison took a poll, and all of the women agreed that Matt should start kissing with his eyes closed.

Thankfully, he's willing to try and has been doing some "self-reflection" on his approach since watching the show. “I didn’t know that you were supposed to have your eyes closed," he admitted. In an interview with ACC Network's In Play, he said it was "just as uncomfortable for me to watch as everybody else." His solution? "Maybe I need to start wearing shades? If I were to do this again, I'd probably have an eye patch or something," he told In Play. "It's a learning experience."

In the meantime, he's joining the crowd and poking fun at himself. On Jan. 18, he tweeted a closeup photo of his eyes with the caption: "*Literally any kiss POV*."

And in response to a roast from his best friend Tyler Cameron, the Bachelor spun the narrative. "Gotta make sure no one sneaking up on us! When your eyes are closed.. ANYTHING can happen!" he wrote. "It's for both of our protection."