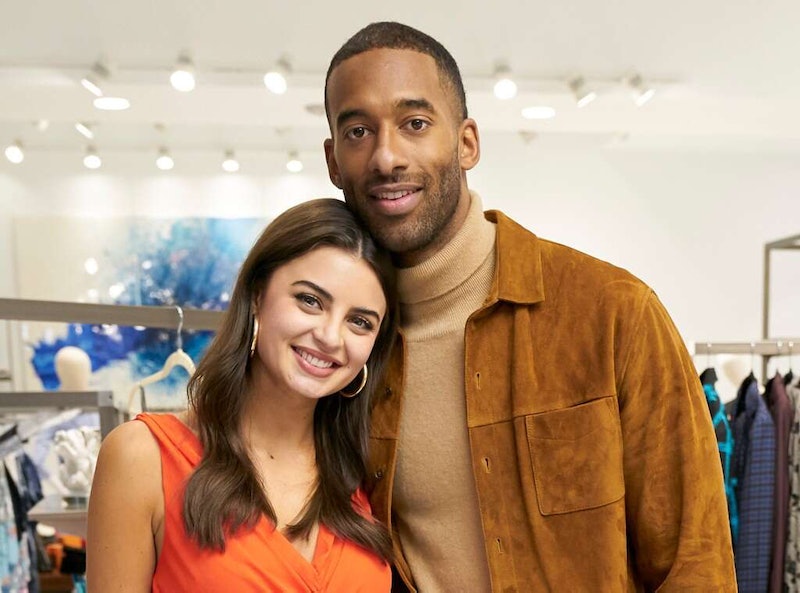 If you’re confused about why Matt James and Rachael Kirkconnell are trying to make things work post-racism scandal, you’re not alone. On Wednesday, May 5, TMZ shared photos of the Bachelor couple looking quite cozy while strolling around New York. The photos came just one week after the Season 25 lead confirmed to People that he and Kirkconnell are giving their relationship another go. Of course, this news has many devoted fans wondering what inspired James to give Kirkconnell another chance. And in a brand new interview with WSJ, the former Bachelor explained why he decided to once again pursue the relationship.

“I think the best way to put it is that we can have critical conversations about being in this relationship and what I need in a partner — especially if that woman isn’t Black — [is] to understand what comes with me and my life and being Black,” the reality star explained before adding that people need space to grow and educate themselves. “It’s on people who care about being allies to do the work to be truly antiracist. And I think it’s unfair to leave people without the ability to unlearn and be better.”

According to WSJ, Kirkconnell confirmed in writing that she and James are back together, which only supports what the 29-year-old commercial real estate broker said last week. “I’ve seen Rachael a handful of times,” he told People on April 28. “I’m not pursuing any relationships right now outside of that. I said I was going to focus on my relationship with her and that means focusing on it.” He was also asked about what Rachael’s been doing to educate herself. “That's something you could talk to her about,” he said, adding that his major focus has been on community work and training for a marathon.

James’ latest comments about the status of their relationship may come as a surprise to some, especially if they watched him address Kirkconnell on the After the Final Rose special in March. “The most disappointing thing was having to explain to you why what I saw was problematic and why I was so upset,” James told the former contestant about the racist photos of her that surfaced online mid-season. “When I’m dating someone, [I’m] on track to get married. And so when I questioned our relationship, it was in the context of you not fully understanding my Blackness and not understanding what it means to be a Black man in America.”

For a while, it seemed that James and Kirkconnell would not be able to reconcile. After being spotted out together in early April, for example, a source confirmed to E! News that James had “no intentions of dating her in the future.” However, things got even messier later that month when an insider told E! News that they were “no longer speaking” after a woman named Grace told Reality Steve that she was talking to James during one of Kirkconnell’s visits to New York. “She is devastated and feels totally played by Matt,” the source revealed at the time. “Rachael really trusted that they could have a future together and is heartbroken.”

Now, it seems the two have managed to work things out, which was what Kirkconnell had been hoping for all along. “While I never expected this outcome, I respect his decision completely,” she wrote on Instagram post-ATFR, referring to James’ decision to call off their relationship altogether. “Of course, I wish circumstances were different, but I still feel blessed for the time we did have together and the memories we made. I got to fall in love, and I truly believe he was the love of my life.”

More like this
RHOP’s Robyn Dixon Explained Why Juan Paid For Another Woman's Hotel Room
By Brad Witter
Lala Kent’s Ex-Fiancé Randall Emmett Is Still In Hot Water Over An LA Times Exposé
By Jake Viswanath
Paris Hilton & Carter Reum’s Relationship Timeline Includes A 2023 Grammys Date Night
By Bustle Editors
'Bachelorette' Vet Clare Crawley Revealed Her Stunning Wedding Photos
By Stephanie Topacio Long
Get Even More From Bustle — Sign Up For The Newsletter
From hair trends to relationship advice, our daily newsletter has everything you need to sound like a person who’s on TikTok, even if you aren’t.