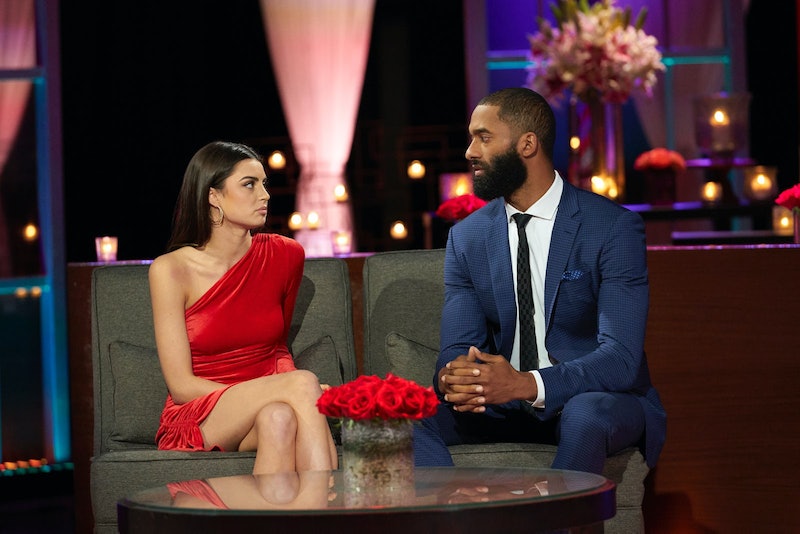 Right about now, all of Bachelor Nation is wondering the same thing: Are Matt James and Rachael Kirkconnell really back together? And although the exact status of their relationship remains unclear, these new photos of the pair strolling around New York City captured by TMZ seem to suggest that they’ve managed to put Kirkconnell’s racism scandal behind them. In one of the images, the two are seen walking side by side. In another, the former Bachelor’s hand is clearly wrapped around the Season 25 winner’s waist.

For some fans, these photos may not come as much of a surprise. James and Kirkconnell have been spotted out and about on several occasions following the After The Final Rose special in March, which delved into the racially insensitive photos of Kirkconnell that surfaced online mid-season. But just when fans thought the two were making amends, an insider told E! News in April that they were “no longer speaking” after a woman named Grace told Reality Steve that she was talking to James amid one of Kirkconnell’s visits to New York.

“She is devastated and feels totally played by Matt,” the insider revealed at the time. “Rachael really trusted that they could have a future together and is heartbroken.” Us Weekly’s source echoed that sentiment, adding that Rachael felt “very hurt” and “manipulated” when she found out about Grace because she and James had reportedly been “talking about a future together.” The source also added that Grace — who knew James prior to his time on The Bachelor — and Rachael “dropped him” upon learning that he was talking to both of them at once.

But alas, it seems that Rachael didn’t drop the former Bachelor for long. Just last week, James confirmed to People that he and Kirkconnell were back on in some capacity. “I've seen Rachael a handful of times,” he told the magazine. “I’m not pursuing any relationships right now outside of that. I said I was going to focus on my relationship with her and that means focusing on it.” However, when asked about the ways Rachael has been educating herself about racism, he didn’t respond. “That's something you could talk to her about,” he said, adding that his major focus has been on community work and training for a marathon.

James’ latest update about the status of their relationship is a far cry from what fans saw play out on ATFR. “The most disappointing thing was having to explain to you why what I saw was problematic and why I was so upset,” James told Kirkconnell on the televised special in March. “When I’m dating someone, [I’m] on track to get married. And so when I questioned our relationship, it was in the context of you not fully understanding my Blackness and not understanding what it means to be a Black man in America.” Then, in early April, a source told E! News that James had “no intentions of dating her in the future.”

Kirkconnell, for her part, made it clear following ATFR that she was hoping that things would eventually work out between them. “While I never expected this outcome, I respect his decision completely,” she wrote in a March 15 Instagram caption, referring to James’ decision to call off their relationship. “Of course, I wish circumstances were different, but I still feel blessed for the time we did have together and the memories we made. I got to fall in love, and I truly believe he was the love of my life.” Kirkconnell also added that James will “always hold a piece of [her] heart” and that she will “always be hopeful and believe what’s meant to be will be.”