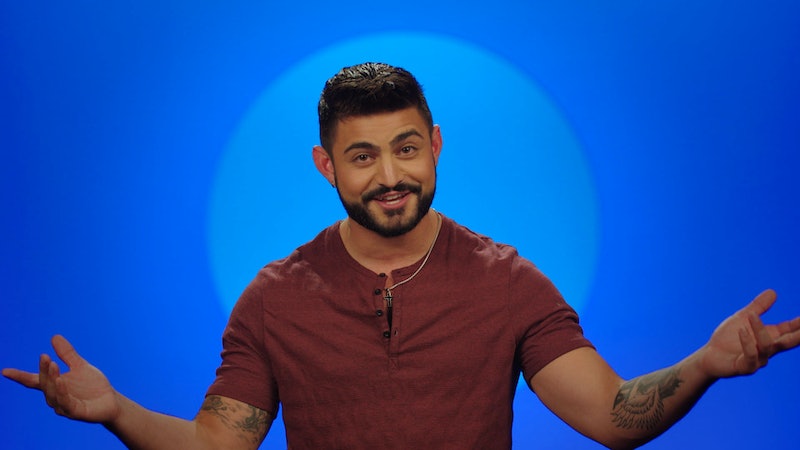 In high school, Matthew Pappadia had a teacher who told him that he wasn’t special. “I wrote a letter and put it in his mailbox/cubby just before graduation,” Matthew, now 29, explained in a Sept. 8 Instagram post. “The last thing I wrote: ‘You will see me in Times Square one day. It may not be tomorrow or 5 years from now, but it will be soon.” Thirteen years later, Matthew stood in front of his own photo on a Times Square billboard.

The billboard was for Season 3 of Netflix’s competition series The Circle, on which Matthew is currently catfishing as his best friend Ashley. In his intro video, Matthew explained that he chose to play as Ashley because people tend to think he’s “vain and shallow” based on his career as a health and fitness coach and all of the shirtless selfies he posts because of it. He says that people tend to trust Ashley more because she’s “delicate” and has a “less intense” look than him.

His strategy as Ashley to “be the guys’ best friend and the girls’ confidants.” One thing he’ll miss, however, is being able to flirt as himself. “But we’ll make up for it in other ways,” he said, joking that he’ll make “a little Play Doh boyfriend [to] pretend to flirt with” if he has to. Here’s everything else to know about Matthew.

A personal trainer and occupational therapist, Matthew helps clients “develop sustainable and innovative lifestyle changes under the lens of total well being” through his company Papp’s Fitness. He also frequently shares free motivational wisdom online. “The ability to push past your physical limits is what defines your progress in and out of the gym,” he wrote in a July Instagram post of fitness tips. “If you fail to push your limits, your body isn’t required to synthesize new muscle tissue. The key to ensuring you’re pushing yourself is focus: 100% focused each and every single time you hit the gym.”

Matthew also started acting and modeling when he was 21 years old after photographer Jorge Friere discovered him on a vacation. He’s been featured in men’s fashion campaigns for brands including Differio, posed in his briefs as a Vanity Hype pin-up in 2014, and graced the cover of the LGBTQ+ lifestyle publication Wire Magazine three times, most recently in January 2020.

“God, Gains & Gratitude. Coach. Islander. Epileptic. Baby vegan,” Matthew’s Instagram bio reads. With 124 posts, Matthew is pretty active on the platform, where he mostly shares shirtless solo shots. He even managed to post a shirtless picture of himself flexing his bicep after having half of his thyroid gland removed in January 2020. However, he occasionally shares clothed photos too: one of the earliest pictures on his page, from October 2014, naturally features his BFF Ashley Chewski. In April 2020, Matthew also introduced Instagram to his puppy Luke Skywalker.

On Twitter, Matthew recently wrote that the three most important values he strives for are generosity, humility, and kindness. “So many people live in their egos and the illusions of the world they create,” he tweeted on Aug. 30. “It is the absence of ego in which we are able to navigate life in its truest, most raw form.”

We’ll see how far that gets him on The Circle.