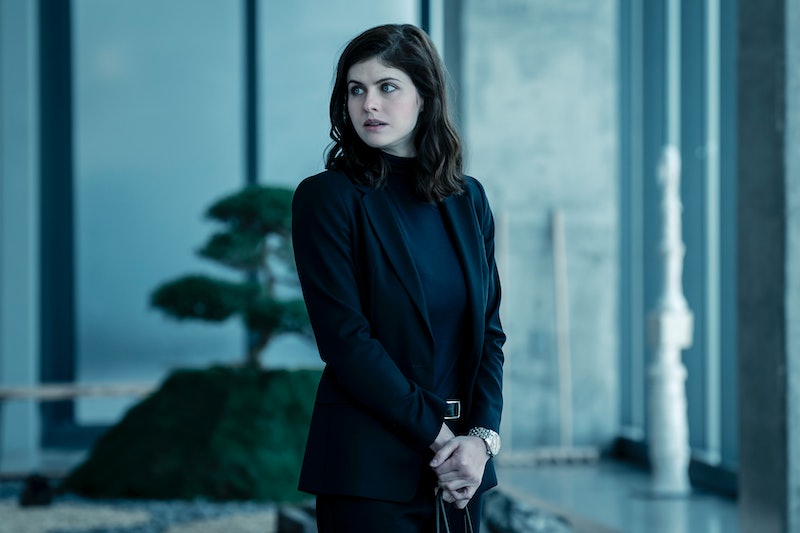 Anne Rice’s Immortal Universe is expanding on AMC. Following the critical acclaim of Interview with the Vampire during the spooky season, a new supernatural drama is here to get you through the winter: Mayfair Witches. Based on Rice’s trilogy, Lives of the Mayfair Witches, the new series stars Alexandra Daddario as Rowan Fielding, a neurosurgeon with a strange ability — she can heal or kill people with her mind.

Viewers learn that Rowan is actually a descendant of a New Orleans witch family, which is connected to a demonic creature called Lasher. The series only just premiered on Jan. 8, but if you want to get a sense of how Rowan’s story unfolds, here’s what happens in the Lives of the Mayfair Witches book ending. Spoilers ahead.

For starters, it’s worth noting that the first season of Mayfair Witches will largely revolve around the events of the first book, The Witching Hour, which came out in 1990. Co-creator Esta Spalding explained the decision in a featurette at the end of Episode 1, adding that the question of “Am I a destroyer or not?” will plague Rowan throughout Season 1.

In the first book, Rowan saves a man named Michael from drowning — after which he gains psychic powers. The two form a relationship and travel to New Orleans to learn about their respective connections to Lasher and the Mayfair family.

Readers also meet a man named Aaron Lightner, who is a member of the Order of the Talamasca, which studies supernatural creatures like the Mayfairs. Michael and Aaron don’t appear on screen, though. As Spalding told Syfy, Ciprien Grieve will instead serve as a hybrid combination of both characters.

“[The show] is about female power and if there were too many forces hovering around [Rowan], it would distract,” she explained.

By the end of The Witching Hour, Rowan and Michael are expecting a baby. However, Lasher possesses the fetus and is essentially born into human form — his ultimate goal — as a full-grown man.

The next two books in the trilogy, Lasher and Taltos, delve more into Lasher’s lore, including his quest to breed children with other Mayfair witches. It’s... a lot! But if you’re wondering how the bizarre, fantasy horror ties back into the more familiar members of Rice’s world (i.e., her vampires), rest assured there will be connections along the way. At a Critics Association panel, Spalding said she’s “waiting for somebody to figure [out]” which character appears in both Mayfair Witches and Interview with the Vampire, per Collider. Executive producer Mark Johnson added that viewers should look out for Easter eggs between both shows, too.