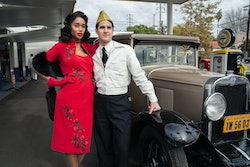 Spoilers ahead for Hollywood Season 1. Ryan Murphy's new Netflix series, Hollywood, follows a group of young, struggling creatives brought together by one movie: Meg. Not to be confused with The Meg, a real movie about a giant shark, the fictional film centers around the true story of Peg Entwistle, a 24-year-old actress who died by suicide after jumping from the Hollywood sign in 1932. But the movie ends up making several changes to her story.

Archie (Jeremy Pope), a black, gay man, initially writes Meg as a faithful retelling of Entwistle's tragic death. He doesn't want to be pigeonholed into making "race pictures," and, against the backdrop of 1940s Hollywood, knows that writing a film about a white actress gives him a better chance of catching his big break. But after it's greenlit by Ace Studios and Raymond (Darren Criss) comes onboard to direct, he, Archie, and a band of other aspiring actors and filmmakers transform it into a groundbreaking film. The title is changed from Peg to Meg; Camille, a black woman, is cast in the leading role; and it's overseen by Avis Amberg (Patti LuPone), a female studio head filling in for her sick husband. They also cast Asian-American actress Anna May Wong (Michelle Krusiec), who's largely been shut out of the industry.

Though Meg faces widespread backlash, it's ultimately a success, and almost all of its cast and crew win Oscars, including Camille for Best Actress, Archie for Best Original Screenplay, and Wong for Best Supporting Actress. In real life, the first black woman to win a Best Actress Oscar was Halle Berry in 2002, the first black, gay screenwriter to win an Oscar was Tarell Alvin McCraney in 2017 for Moonlight, and the only Asian-American actress to have won Best Supporting Actress is Miyoshi Umek in 1958. Wong, who was a real person, was never nominated for an Oscar, and at the real 20th Academy Awards ceremony, no film even close to the black-written, black-led Meg was nominated. The wholesome holiday film Miracle on 34th Street — which has an almost exclusively white cast — won Best Picture.

Pope told Elle magazine that the whole point of Hollywood is to explore how different the industry would be if more opportunities had been given to marginalized creators earlier on. The answer, according to the show, is that it would have changed a lot. If that Oscars ceremony had been real, it would have broken barriers that took decades to reach in real life — or that have still never been reached at all. Meg, then, doesn't represent anything real, but everything that could have been.