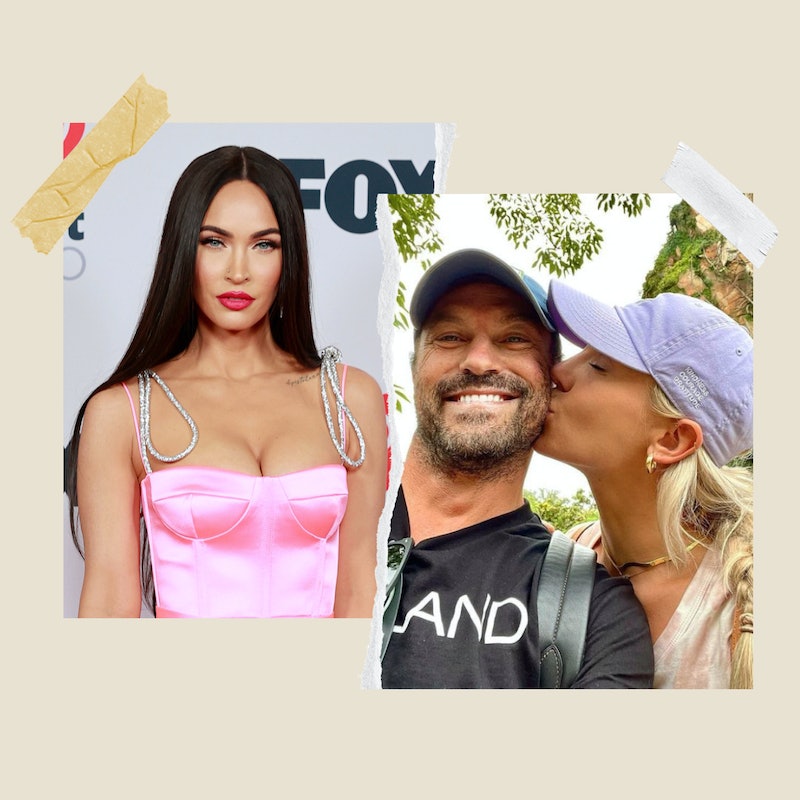 Megan Fox is so here for her ex-husband’s current relationship. Brian Austin Green shared a steamy Instagram photo of him kissing his girlfriend Sharna Burgess at Disney’s Animal Kingdom on July 6. He captioned the post with, “It’s been a really long time since I’ve been with someone I can truly share life with.” But Green isn’t the only one who’s thrilled about his romance with the Dancing With the Stars pro. Ex-wife Fox is too.

“Grateful for Sharna,” Fox commented alongside a purple heart emoji, according to the @CommentsByCelebs Instagram account, which captured a screenshot of Fox’s reply before it was deleted. And it seems that while Fox is grateful for Burgess, Burgess is grateful for Green. “There’s no one else I could ever imagine sharing [life] with,” the dancer wrote in the comments. “I love you.” The dancer also shared a photo on her feed of her planting a kiss on the Beverly Hills, 90210 star’s cheek. “Even at Disney World you’re all I see,” she wrote. “I could never get enough of you.”

Interestingly, Fox’s comment has vanished, leading some fans to wonder if the message was meant to be shade instead of praise. However, Green clarified that he and his ex are actually on very good terms. “For people that need or want clarification. Megan and I get along great,” he wrote on his Instagram Stories on July 7. “Neither of us are sending petty digs to each other. We both work really hard to get along and coparent well for our kids. Now stay safe and spread kindness and love.”

It’s nice to see that Fox is so supportive of her ex’s relationship — especially considering the drama that went down following their late 2019 split. After their breakup, things got messy between them on social media on multiple occasions. In November 2020, for example, Fox accused Green of purposely trying to make her look like a bad parent to their three children: Journey River, 4, Bodhi Ransom, 7, and Noah Shannon, 8.

“I had a great Halloween with them yesterday, and yet notice how absent they are from my social media,” she commented on Green’s Halloween post with their children. “I know you love your kids. But I don’t know why you can’t stop using them to posture via Instagram.” She also called out her ex for making it seem like she’s an “absent mother” while painting himself out to be “the perennial, eternally dedicated dad of the year.”

This, of course, was just one example of Fox and Green’s social media beef. In November 2020, the Jennifer’s Body star shared a photo on Instagram with her current boyfriend Machine Gun Kelly. “Achingly Beautiful Boy... My heart is yours,” she captioned the post. Green then trolled his ex by sharing an image of their sons and mocking Fox’s caption. “Achingly beautiful boys…… My heart is yours,” he wrote.

Fox’s latest comment on Green’s picture with Burgess seems to prove that the exes are in a much better place now. And certainly, Green is happier than he’s been in a very long time. Earlier this month, the actor told People that meeting Burgess changed everything. “On our first date, we just completely lost track of time and the same thing happened the next time,” he said. “It became something noticeably different from anything I’d ever experienced before.”

Burgess echoed Green’s sentiments, explaining to the magazine that they met at a coffee shop and quickly found themselves “locked in a house together” amid the coronavirus pandemic. “I was grateful for that because it allowed us to really take our time and it was really awesome,” she said. Green, for his part, knew that Burgess was the one as soon as they kissed. “I wasn’t sure what that meant until the first time we kissed and then it was the attraction and a whole bunch more,” he added. “It was really cool. And we really have the same moral compass.”