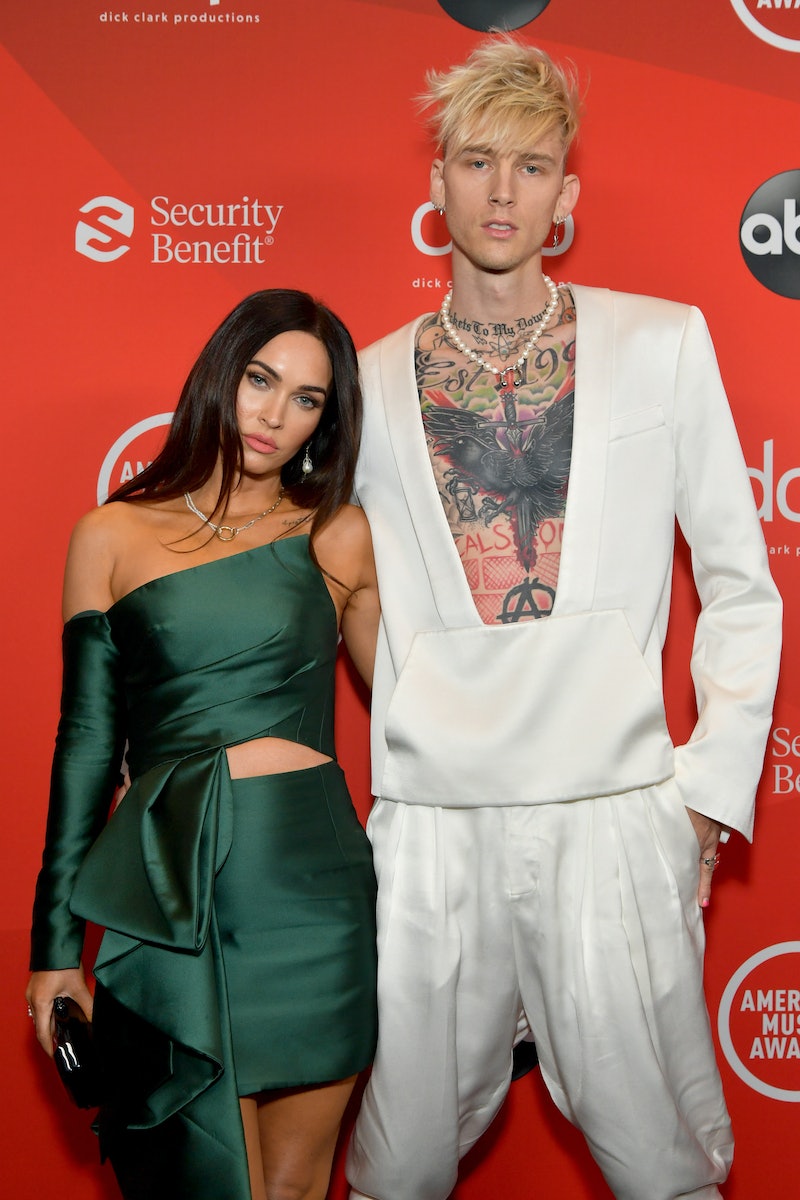 Megan Fox is sending a message with her new ring — just not the one you might think. After rumors began swirling that the actor and her rapper boyfriend, Machine Gun Kelly, were planning to tie the knot, Megan Fox shut down engagement rumors on Instagram with a simple but effective story. She offered a closer look at the massive ring she was photographed wearing on her left hand on Jan. 28 while in New York City with Kelly (also known as Colson Baker), revealing it was a statement of another kind.

Very much not a traditional diamond ring, Fox's chunky silver ring reads, "F*ck You," as the close-up photo she posted on her Instagram story the following day shows. While the piece in question did once belong to her rapper beau, Fox shared how she felt about the engagement speculation by captioning the post with a single eye-roll emoji. But while the couple may not be ready to walk down the aisle just yet, both Fox and Kelly have made it clear that they are very much committed to one another in the months since their relationship became public.

The pair met on the set of their film Midnight in the Switchgrass in March 2020, just before filming had to be halted due to the emerging COVID-19 crisis. By April, there were reports that Fox was splitting from Brian Austin Green, her husband of 10 years; they "had been living separately," a source told E! News. In June, the outlet reported her romance with Kelly was "very different" from her relationship with Green, with an insider saying Fox was having "a lot of fun" with the rapper. "It's new and exciting for Megan. She has only been with Brian for many years and this is very different. She's into it," the source said.

Just a month later, Fox explained during a July episode of the podcast Give Them Lala ... with Randall that things had already gotten serious with Kelly. "I knew right away that he was what I call a twin flame," the actor said, per People, revealing that she often waited outside his trailer to try and catch a glimpse of him. She explained that "a twin flame is actually where a soul has ascended into a high enough level that it can be split into two different bodies at the same time," meaning she and Kelly are "two halves of the same soul."

In November, she described her relationship with Kelly as a "once in a lifetime thing" with a connection of "mythic proportions" during an interview with Nylon. "Loving him is like being in love with a tsunami or a forest fire," she said. "The intensity of merging with him is just overwhelming, and the threat it poses is so powerful but so beautiful that you have no choice to surrender with reverence and with gratitude." Describing the moment she knew they were meant to be together, she added, "I looked into his eyes [and] I felt the most pristine, most gentle, most pure spirit. My heart shattered immediately and I just knew that I was f*cked."

Kelly has been equally effusive about their relationship, telling Howard Stern in September that this is the first time he has ever been in love. "I didn't know what [love] was until me and her made eye contact," the rapper said of meeting Fox on set. "That's when I was like, 'Whoa.' After I made the big chunk of the album, I did fall in love for the first time. That was my first experience with being open to love and stuff like that."

They may not be engaged, but it's clear that Fox and Kelly are head over heels in love with one another and don't need an engagement ring to prove it.

More like this
Adam Levine & Behati Prinsloo Welcome Their Third Child Together
By Jake Viswanath
Meghan Trainor & Daryl Sabara Are Expecting Their Second Baby
By Jake Viswanath
Hilary Duff's Husband Matthew Koma Has Her Name Tattooed On His Butt
By Jake Viswanath and Stephanie Downs
You’ll Definitely Recognise Isadóra Bjarkardóttir Barney’s Mum
By Maxine Harrison
Get Even More From Bustle — Sign Up For The Newsletter
From hair trends to relationship advice, our daily newsletter has everything you need to sound like a person who’s on TikTok, even if you aren’t.