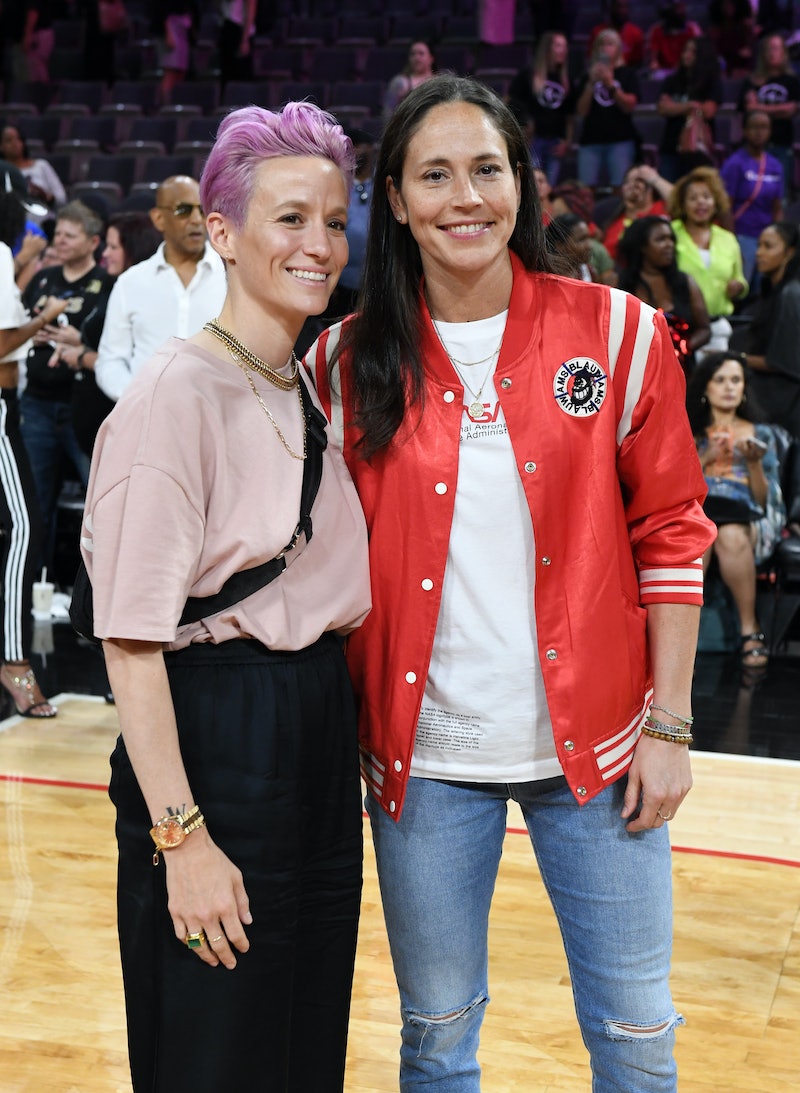 After first meeting at the 2016 Olympics in Rio de Janeiro, Megan Rapinoe and Sue Bird are engaged, the pro athletes announced via social media on Friday, Oct. 30. WNBA star Bird, who currently plays for the Seattle Storm, first shared the captionless Instagram photo of Rapinoe kneeling on the edge of an infinity pool overlooking the ocean as she places a ring on her finger. For her part, Seattle's OL Reign pro soccer star shared the same image on her page the following day, also foregoing a caption.

The couple's famous friends had much more to say, however. Celebrities, including Gabrielle Union, Jay Ellis, Sophia Bush, Jordin Sparks, G-Eazy, and Katie Couric, were quick to offer their congratulations in the comments section. "Ahhhhh!! Congrats frens!!!" Bush replied to the post.

Perhaps the most high-profile congratulatory message came from former Vice President and 2020 presidential hopeful Joe Biden. "Love will always win," he tweeted on Oct. 30, tagging both women and offering his congratulations. Rapinoe responded to Biden the next day, tweeting, "Thank you @JoeBiden Love does always win."

Rapinoe opened up about her relationship with her fellow Olympic gold medalist girlfriend of four years to People last October. "We are huge fans of each other. I have become, like, a Seattle Storm number one superfan, of course," the U.S. Women's National Team captain told the magazine at the time. "I think it is just the understanding of what we have to go through and the appreciation of, you know, each other's skills and lives is really special. And in the same sense, we are just normal to each other. Which is really nice. Like, neither of us are like, 'Oh wow you are the best person that has ever played basketball.' Which she is!"

She also explained how comfortable they are together, adding, "It is nice to just be able to totally unwind and be completely yourself and, you know, have someone understand and appreciate how special it is, what you are doing, but also just love you for who you are and just to be that kind of support system."

More like this
Who Is Allison Williams Dating After Her Divorce? She’s Engaged With A Child
By Jake Viswanath
Selena Gomez Confirms She's Single Amid Drew Taggart Dating Rumors
By Martha Sorren, Jake Viswanath and Jack Irvin
Here’s What Happens To Bill & Frank In 'The Last Of Us' Video Game
By Brad Witter
RHOP’s Robyn Dixon Explained Why Juan Paid For Another Woman's Hotel Room
By Brad Witter
Get Even More From Bustle — Sign Up For The Newsletter
From hair trends to relationship advice, our daily newsletter has everything you need to sound like a person who’s on TikTok, even if you aren’t.