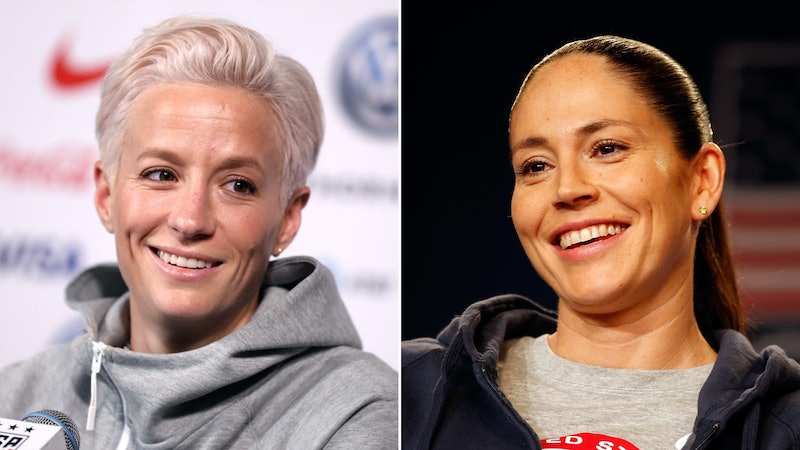 Last week, the president attacked one of the country's star soccer athletes on Twitter, accusing her of disrespecting the country, the White House, and the American flag. Many fans and onlookers were outraged, but President Trump has had far from the last word. On Tuesday, Sue Bird wrote an article about Megan Rapinoe, her girlfriend, praising the soccer player for handling sticky situations with both spitfire and grace.

"I mean, some of it is kind of funny….. but like in a REALLY? REALLY? THIS GUY??? kind of way," Bird wrote in a column for The Players' Tribune. "Like, dude — there’s nothing better demanding your attention?? It would be ridiculous to the point of laughter, if it wasn’t so gross."

Trump went after Rapinoe after she said that she would not go to the White House if the U.S. women's soccer team won the World Cup later this month, per The Washington Post. Rapinoe is not the first athlete to make such an announcement, and is also not the only one to receive the ire of President Trump for taking such a stance.

"I am a big fan of the American Team, and Women's Soccer, but Megan should WIN first before she TALKS!" Trump wrote in a string of tweets directed at Rapinoe. "Finish the job!"

In her column, Bird described Rapinoe as unshakable and fiercely independent. "She’s going to do her thing, at her own damn speed, to her own damn rhythm, and she’s going to apologize to exactly NO ONE for it," Bird wrote, noting that Rapinoe appeared unfazed in light of the president's criticisms.

"It’s strange to say, but that was probably the only normal thing about it," Bird wrote. "It’s not an act with her. It’s not a deflection. To me it’s more just like: Megan is at the boss level in the video game of knowing herself."

Bird's column focused on a myriad of things — President Trump's tweets, soccer, and, of course, Rapinoe's indefatigable confidence. But it also addressed her sensitivities, which Bird argues are one of her girlfriend's greatest strengths.

"And I think Megan’s sensitivity is what drives her to fight for others," Bird wrote. "I think it’s what drove her to take a knee. The Megan you’re seeing now? It’s the stronger version of the one who knelt in the first place... I think in trying to help others, Megan has cemented who she is."

Rapinoe has received attention in the past for participating in the kneeling protests spearheaded by Colin Kaepernick. President Trump has long opposed such protests.

“I haven’t experienced over-policing, racial profiling, police brutality or the sight of a family member’s body lying dead in the street," Rapinoe wrote in a 2016 essay. "But I cannot stand idly by while there are people in this country who have had to deal with that kind of heartache."

Bird ended her piece on a sweet note, professing both her love for Rapinoe and the pride that their relationship evokes. "It was like for this one, perfect, fleeting, uncomplicated day….. I was everyone. I was happy," she said of Rapinoe's performance last Friday. "I was crazy. I was PROUD. I was pretending to know about soccer. I was a little overwhelmed. I was pretty damn American. And I was in love with Megan Rapinoe."