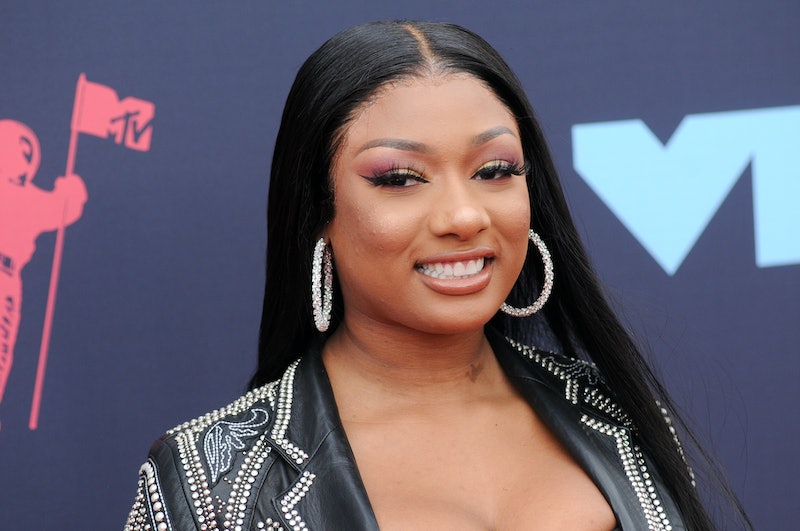 Megan Thee Stallion would like everyone to think twice before joking about the shooting incident that left her hospitalized. Two days after the rapper revealed that she was "grateful to be alive," Megan Thee Stallion responded to speculation about her shooting incident in a Twitter post that stressed the serious nature of the incident and her injuries. According to reports, Megan was leaving a pool party in the Hollywood Hills with fellow rapper Tory Lanez when the latter was arrested on concealed weapons charges on July 12.

At the time, TMZ reported that Megan was taken to the hospital after suffering an injury to her foot, which was believed to be from broken glass. However, the "Savage" rapper revealed on Instagram on July 15 that she had actually been shot, and underwent surgery in order to have the bullet removed from her foot. In the days since, social media had been flooded with unverified accounts of what happened during the incident, along with jokes poking fun at Megan, Lanez and the incident in general.

In response, Megan shared a post on Twitter slamming those who have used the news to speculate on her love life and make fun of a "traumatizing" situation that she's still recovering from. "Black women are so unprotected & we hold so many things in to protect the feelings of others w/o considering our own," she wrote on July 17. "It might be funny to y'all on the internet and just another messy topic for you to talk about but this is my real life and I'm real life hurt and traumatized."

Ahead of the incident — which reportedly occurred around 4:30 a.m. on Sunday morning — Megan was spotted hanging out with Kylie Jenner in the pool of a house in the Hollywood Hills; the pair even appeared on Instagram Live together, posing for the camera and joking around. (A man's voice can be heard in the clip telling Megan and Jenner to turn down the music, because the police had been called.)

According to TMZ, Lanez was arrested some time later, after an altercation in front of the house that allegedly resulted in gunshots being fired. Megan was allegedly in Lanez's car when he was apprehended, and her foot was bleeding. "On Sunday morning, I suffered gunshot wounds, as a result of a crime that was committed against me and done with the intention to physically harm me," Megan wrote on Instagram a few days later, after news about the incident broke.

"I was never arrested, the police officers drove me to the hospital where I underwent surgery to remove the bullets," she continued. "I'm incredibly grateful to be alive and that I'm expected to make a full recovery, but it was important for me to clarify the details about this traumatic night." Megan also added that she is expected to make a "full recovery" and that she hopes to return to the studio as soon as possible.

On July 18, TMZ reported that the LAPD had officially opened an investigation into the shooting, although Lanez has not been officially named as a suspect in the incident. Thus far the rapper has not publicly commented on the incident, and details about what exactly happened appear to be scarce thus far. In the meantime, though, it seems that Megan is focusing on looking after her mental and physical health in order to make a speedy recovery.