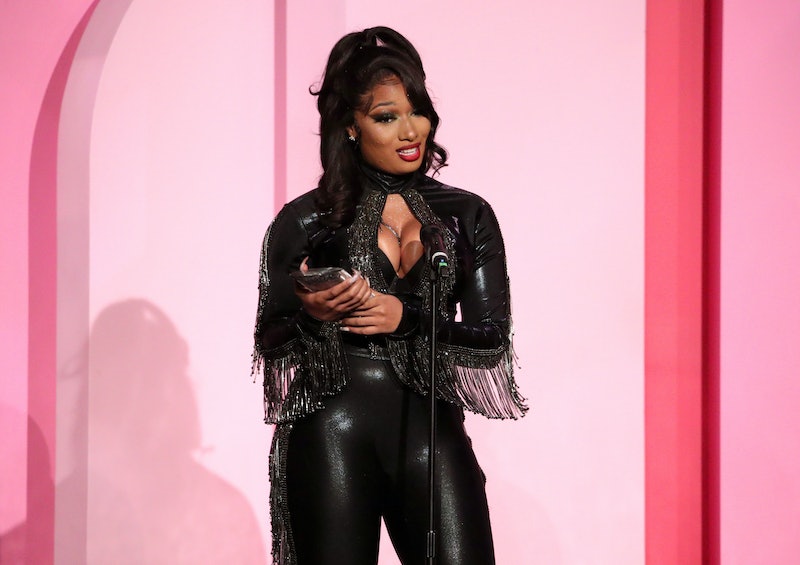 Megan Thee Stallion’s debut album Good News just dropped, and it’s already become one of the most celebrated releases of the year. But in the midst of the excitement, the alleged shooting that the rapper endured over the summer — as well as the subsequent case and impending trial — is bubbling up to the surface as the album features a track titled "Shots Fired."

Some details are disputed between Megan, law enforcement, and others present, but on July 12, she and a then-unidentified woman were in a car with rapper Tory Lanez. (While the exact nature of her relationship with Lanez prior to what occurred was never publicly specified, according to an essay that Megan later wrote for The New York Times in October, she was not romantically involved with him at the time.) Soon after they were seen together that evening, though, Lanez was arrested for allegedly carrying a concealed weapon in the car; the search took place after gunshots were heard at a house party in the Hollywood Hills that Lanez had purportedly attended. At first it was reported by TMZ that Megan had suffered a foot injury due to shattered glass during the event and was taken to the hospital to care for her wound, but that was later revealed to not be the full story.

On July 15, several days after the alleged encounter, the “WAP” singer issued her first statement on the incident via Instagram, which she later deleted, claiming that she’d “suffered gunshot wounds as a result of a crime that was committed against me and done with the intention to physically harm me.” In that initial retelling of the ordeal, Megan didn’t name an attacker. The Los Angeles Police Department also issued a statement to TMZ saying that the rapper didn’t identify herself as the victim of a crime in the immediate aftermath of the event.

Further details of the incident were under wraps for several weeks, until Megan then opened up about the ordeal in an Aug. 20 livestream on Instagram. In this instance, however, she directly named Lanez as her alleged assailant, saying, "You got your publicist and your people going to these blogs lying and sh*t. Stop lying. Why lie? I don't understand."

While he remained mum on the subject at first, Lanez released an album the following month that featured a diss track titled “Money Over Fallouts” directly disputing Megan’s assertion and claiming that she “framed” him in the shooting.

On Oct. 8, however, Lanez was formally charged by the Los Angeles District Attorney’s Office for the July incident. Per her press release, District Attorney Jackie Lacey alleged that he shot at the feet of Megan, who was referred to as “a 25-year-old victim” in the official statement, several times when she exited a vehicle following an argument. He received one felony count of assault with a semiautomatic firearm (specifically personal use of a firearm) and carrying a loaded and unregistered firearm in a vehicle. There’s also what the district attorney called an allegation “that he personally inflicted great bodily injury.” According to the office’s press release, he faces up to 22 years and eight months in prison if convicted.

Just this week on Nov. 18, Lanez entered a plea of not guilty in the case regarding the shooting, per Lacey’s Twitter account. According to CNN, Lanez’s initial court date is set for Jan. 20, 2021. Megan has not publicly commented on the latest developments, instead focusing on album promotion ahead of the record’s Nov. 20 release.