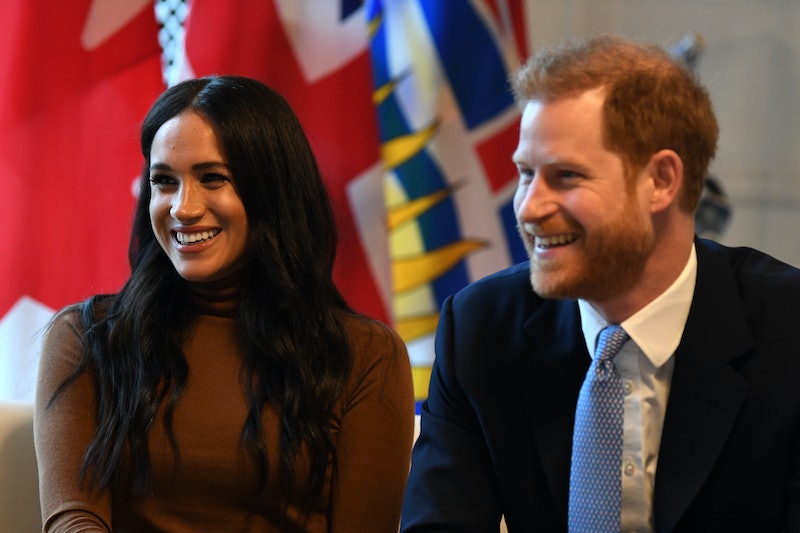 Before baby Archie came along, the first new member welcomed into the Duke and Duchess of Sussex's family was a black Labrador puppy, and now, nearly two full years later, Prince Harry and Meghan Markle's rescue dog's name has been revealed. Tucked in among the juicer details in the upcoming book Finding Freedom: Harry and Meghan and the Making of a Modern Royal Family, by royal journalists Omid Scobie and Carolyn Durand, is the name of the couple's beloved pup. And it's definitely not something so mundane as Rover.

Scobie and Durand reveal that the Lab's name is Pula, which is also the official currency of Botswana, the country in Africa that Meghan and Harry visited when they first began dating. Pula isn't simply the currency of Botswana, though, it also means "rain" in Setswana, and since rain is rare indeed in the country, it's considered "a blessing," per People. That suggests that the couple considered little Pula a blessing when she came into their lives.

The news of Pula's adoption was first reported in August 2018, shortly after the couple's wedding in May. At the time, the famously private royals declined to share the name of their family's newest member. The closest they came to revealing her name was during an October 2018 visit to Sussex when Meghan shared that people "keep getting her name wrong." (At one point, there was speculation that Pula was called Oz.)

In addition to being a sweet connection to one of the couple's most memorable early dates, Pula's name is also a reminder of Harry's devotion to Botswana and Africa as a whole. Harry elaborated on why he plans to devote much of his life's work to the environmental conservation of the continent in the documentary Harry & Meghan: An African Journey. In the program, he revealed that Botswana provided him with a sense of "escapism" after his mother, Princess Diana, died in a car crash in 1997, and he wants to give back to Africa as much as he can.

"The rest of our lives, especially our life's work, will be predominantly focused on Africa, on conservation," he said in the 2019 documentary, per USA Today. "There's a lot of things to be done and a lot of problems here, but there's also huge potential."

Given Botswana's significance to both Harry and his relationship with Meghan, Pula's name clearly means a lot to the couple. Here's hoping their other rescue pup, Meghan's beagle Guy, isn't jealous that his sister got such an important moniker. If it makes Guy feel any better, Archie reportedly doesn't show partiality between his family's dogs. A source previously told People that Archie "is best friends with his dogs," proving that Pula and Guy both have a special place in the young royal's heart.

More like this
Meghan & Harry Respond To Jeremy Clarkson’s "Apology" Over *That* Column
By Sophie McEvoy
A Royal Lie: Harry Reveals The Truth About Princess Diana’s Ring
By Marina Watts
Prince Harry Incorrectly Recites Christina Aguilera’s “Genie In A Bottle” Lyrics
By Jake Viswanath
I Read Prince Harry's 'Spare' So You Don’t Have To: 11 Highlights To Know
By Marina Watts
Get Even More From Bustle — Sign Up For The Newsletter
From hair trends to relationship advice, our daily newsletter has everything you need to sound like a person who’s on TikTok, even if you aren’t.