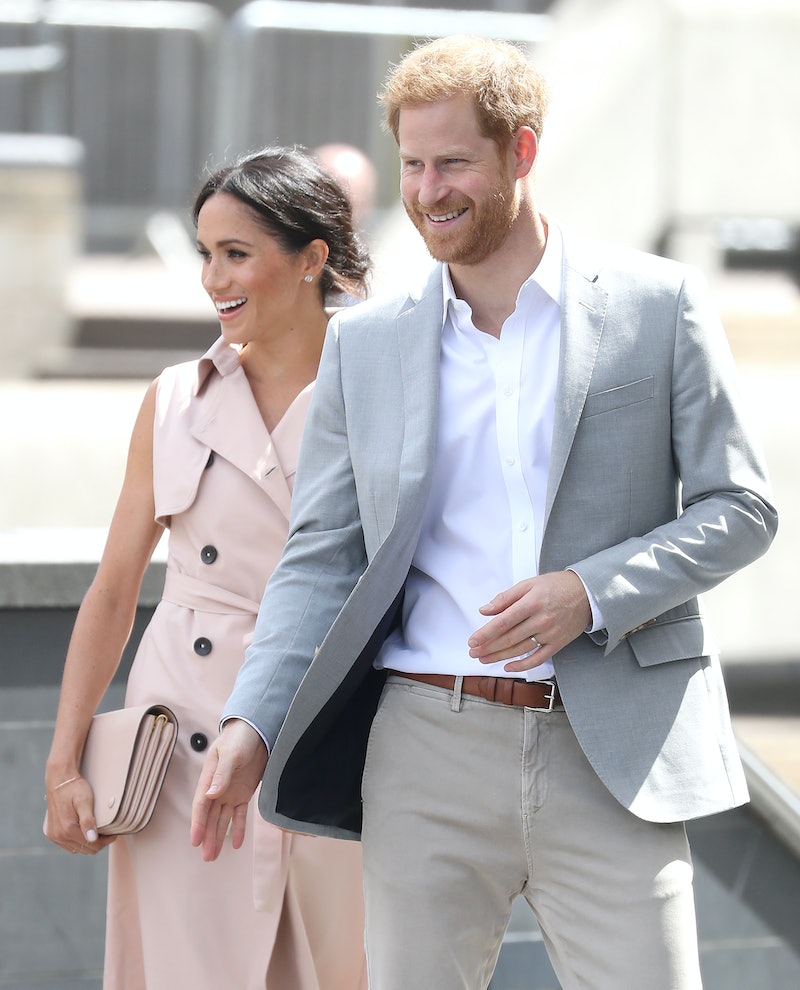 Move over, Meghan Markle's adorable rescue beagle, because there's a new pup in town. Meghan Markle and Prince Harry's new dog is reportedly here, and it's probably the most adorable thing since those pictures of the Duchesses of Sussex and Cambridge taking in a match at Wimbledon together.

People reported that Markle had to part ways with one of her adopted dogs in November 2017, when she and Prince Harry got engaged. As she explained during an interview on their engagement:

"Well I have two dogs that I’ve had for quite a long time, both my rescue pups. And one is now staying with very close friends and my other little guy is – yes he’s in the U.K., he’s been here for a while."

So, one remained in the U.S., and one was able to make his way across the pond with her. Rumors of the pair adopting a dog together have swirled every since, but it wasn't until August 2018 that the news seemed official. Again, seemed; Kensington Royal has not confirmed their adopting a dog on social media just yet. In fact, though People confirmed via "a source" that the couple welcomed a Labrador into their lives earlier this summer, a representative for the Duke and Duchess of Sussex "declined to comment". Mysterious.

Though People did not confirm the pooch's name, the magazine did report that the dog is "believed to be a Labrador," and one the royal couple adopted "in early summer". The magazine's source added:

"[The dog] has been joining them at their country getaway in the Cotswolds area and Nottingham Cottage at Kensington Palace in London."

Though Kensington Royal is staying tight-lipped about it, a polite refusal to comment on the matter doesn't exactly constitute a no. It's possible that they're simply not ready to announce the addition of a dog to the world, for whatever enigmatic royal reason they have. Or maybe they'd like to protect the pup, the way celebrity parents often take great pains to protect their children's identities. But here's hoping that someday soon, Prince Harry and Meghan take their new pup out for a walk so everyone can meet their new adorable addition.

The thing is, until Kensington Royal confirms that the Duke and Duchess of Sussex have adopted a dog, that only adds to the rumor mill. And there's so much room for fans to speculate on the name. The nomenclature options for their new Labrador are endless.

After all, Prince Harry's grandmother Queen Elizabeth II is an avid fan of corgi dogs, getting her very first Pembroke Welsh corgi in 1933, according to New York Times. Since then, the Queen has had at least 30 dogs of the breed, according to the publication. Her final corgi, Willow, died earlier this year in April.

Obviously, whether Harry and Meghan have a dog or are just planning to get one, the pup will definitely become one of the luckiest and well cared-for canines in the known universe.