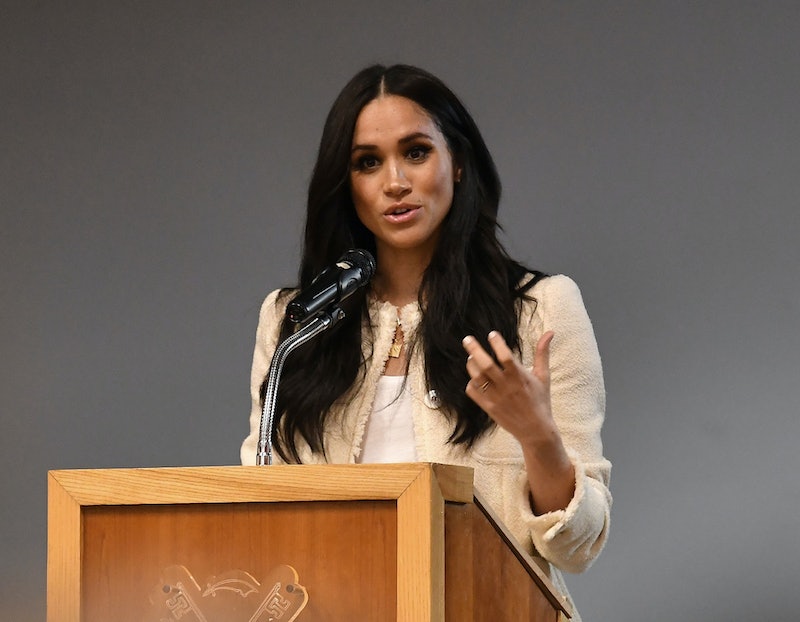 The Duchess of Sussex is going to continue to speak out for the issues that are important to her — especially now that she's back in her home country. During a new interview with Emily Ramshaw, co-founder and CEO of 19th News, Meghan Markle opened up about returning to the United States amid the Black Lives Matter movement, and added that she is looking forward to "[using] my voice" for the first time in a while.

While Meghan primarily served as the conversation's moderator — the interview was part of the nonprofit newsroom's The 19th Represents Summit — she also spoke a bit about her experiences as a biracial woman in these tumultuous times. "It was so sad to see where our country was in that moment," the former duchess said about permanently relocating to California with Prince Harry and son Archie in recent months.

"If there's any silver lining in that, I would say that in the weeks after the murder of George Floyd, in the peaceful protests that you were seeing, in the voices that were coming out, in the way that people were actually owning their role … it shifted from sadness to a feeling of absolute inspiration, because I can see that the tide is turning." (Meghan herself honored Floyd and voiced her support for the Black Lives Matter movement in a graduation speech back in June.)

She continued by explaining that for her, seeing so many young people take part in peaceful protests and fight for change has been really inspiring. "From my standpoint, it's not new to see this undercurrent of racism and certainly unconscious bias, but I think to see the changes that are being made right now is really— it's something I look forward to being a part of," Meghan revealed, adding that she was hoping to be an even more vocal contributor to the movement going forward. "And being part of using my voice in a way that I haven’t been able to of late. So, yeah, it’s good to be home."

Meghan's comment about using her voice comes about a month after new court documents claimed that the she and her loved ones felt "silenced" by the royal family's press protocols while enduring attacks from the British tabloids during her pregnancy. "[Meghan] had become the subject of a large number of false and damaging articles by the U.K. tabloid media, specifically by the [Mail on Sunday], which caused tremendous emotional distress and damage to her mental health," the documents — which were released as part of Meghan and Harry's ongoing lawsuit against The Mail on Sunday — allege. "As her friends had never seen her in this state before, they were rightly concerned for her welfare, specifically as she was pregnant, unprotected by the Institution and prohibited from defending herself."

On August 11, Meghan told Marie Claire that she planned to vote in the 2020 Presidential election in order to continue to use her voice to enact change. "I know what it's like to have a voice, and also what it's like to feel voiceless," she told the outlet. "I also know that so many men and women have put their lives on the line for us to be heard. And that opportunity, that fundamental right, is in our ability to exercise our right to vote and to make all of our voices heard."

"One of my favorite quotes, and one that my husband and I have referred to often, is from Kate Sheppard, a leader in the suffragist movement in New Zealand, who said, 'Do not think your single vote does not matter much. The rain that refreshes the parched ground is made up of single drops,'" Meghan continued. "That is why I vote."