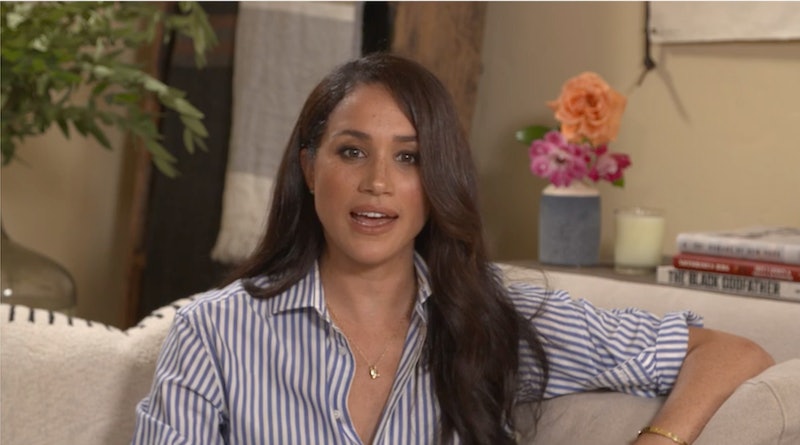 During an appearance at a digital summit, Meghan Markle spoke out about having her words misinterpreted. Meghan, Duchess of Sussex, attended the Fortune Most Powerful Women summit, which was held online, and appeared in conversation with Fortune senior editor Ellen McGirt.

At one point during the chat, Markle was asked what it's like to speak her mind publicly when "a sitting president has taken a shot at you, mobs come at you, powerful forces try to take you down or disparage your message," as McGirt put it.

The Duchess responded by explaining that no matter what, it's important to be your authentic self, and it's usually others who skew her words to make them sound controversial.

"I think it's about being authentic," she said. "If you look back at anything that I've said, it's really interesting because it often ends up that what seems to end up being inflammatory is people's interpretation of it. But if you listen to what I actually say, it's not controversial."

She continued: "Actually some of it is reactive to things that just haven't happened. Which in some ways you have to have a sense of humour, even though there is quite a good deal of gravity and a feel of danger in an interpretation of something that was never there to begin with."

Markle then explained how it's crucial to trust yourself and your own voice, and let go of criticism. "If you don't listen to all the noise out there and just focus on living a purpose-driven life and knowing what your own moral compass is," she said.

"There are always going to be naysayers. The moment you are able to be liberated from all these other opinions of what you know to be true, then I think it's very easy to live with truth and live with authenticity and that's how I choose to move through the world."

More like this
Meghan & Harry Respond To Jeremy Clarkson’s "Apology" Over *That* Column
By Sophie McEvoy
Watch The Sweet Moment Adele Stopped Her Vegas Concert To Kiss Her Son
By Sophie McEvoy
Blake Lively Is Trolling Ryan Reynolds Again – Over Wrexham FC
By Sam Ramsden
4 Surprising Celeb Throuples That Got The Internet Talking
By Sophie McEvoy
Get The Very Best Of Bustle/UK
Sign up for Bustle UK's twice-weekly newsletter, featuring the latest must-watch TV, moving personal stories, and expert advice on the hottest viral buys.