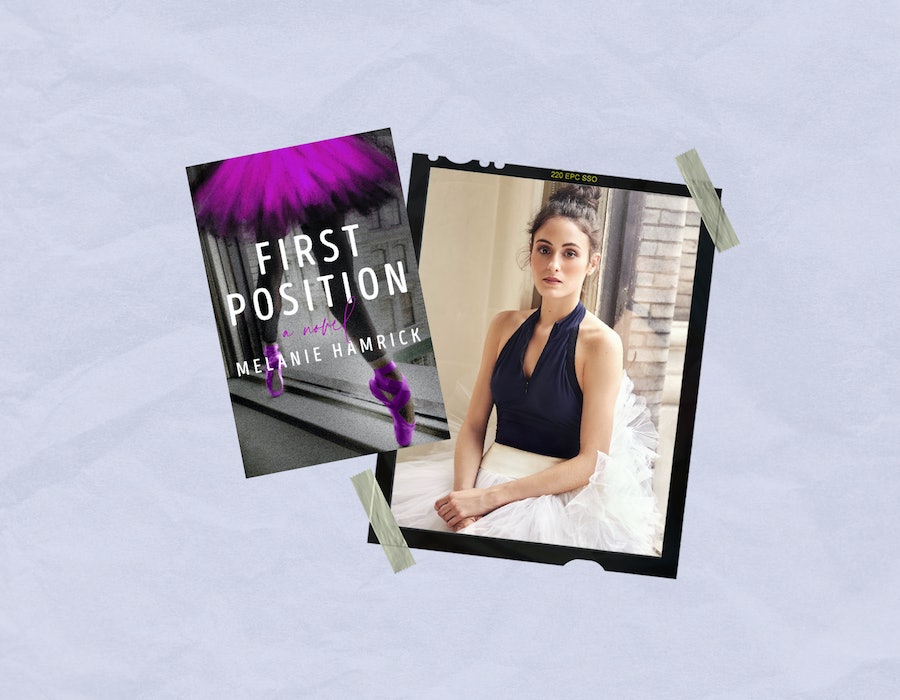 In 2019, after 15 years in the American Ballet Theatre, Melanie Hamrick — an accomplished dancer, and the partner of Mick Jagger — hung up her pointe shoes. Now, she’s publishing her debut novel, which peels back the curtain on the salacious secrets of the dance world.

First Position follows an ambitious young ballerina named Sylvie Carter, who dances with the American National Ballet. Sylvie has big plans for her future onstage, but has grown to loathe the nature of her industry: ballet practice, once a source of joy, has become “never-ending torture.” Her dreams are further dashed when a relationship sours, and the weight of the resulting scandal falls solely on her. She’s sure she’ll never become prima ballerina... until famed dancer Alessandro Russo joins the group, and she finds her life both on and offstage becoming more tempestuous than ever before.

Get a first look at the book’s cover below, and keep scrolling for an exclusive excerpt from First Position’s beginning pages. To read what happens next, get a copy of the novel when it’s out in 2023.

I can hardly see. I’m hot and freezing all at once and I can already tell I won’t remember a lot of tonight. I’m glad that I won’t. I look at the bottle of anti-anxiety medication on my bathroom counter and want to throw them off the hotel balcony. I am better than this. Or at least I was.

I still am, right?

I get out of the bathtub and peel off my drenched dress, walking nude out of the bathroom and over to my bed. I sit with splayed legs for a second before looking at the zipped compartment in my suitcase. I can’t believe I even still hide my old diary. Everyone knows what’s in it. I can’t even believe I’ve kept it. It’s humiliating to revisit.

All these pages admitting to wishing I was famous, looking forward to it. Believing in myself and the world around me so deeply, like life was going to be fair. Happy, even. I’m not a bitter old, jaded hag now or anything, but I’m sure not that girl anymore.

I unzip the pocket and pull it out. What ever possessed me to buy a pink diary?

On the first page, there are the rules.

I read them carefully, though my eyes are seeing double. Maybe it’s less reading and more viscerally, instantly remembering each and every one.

I laugh and shut the book. Jesus. I’ve broken every single one.

I used to love the word encore. It meant everything. It meant it was over, it meant they wanted more, more of what only I was able to give. It meant I was good. Too good to stop.

Once upon a time I yearned to hear it. Now the word fills me with dread. I’m a weary traveler under the hot sun, exhausted, desperately thirsty and achingly hungry, and I’m being told that the end is only a mirage—there are more miles yet to go.

I take my position and repeat the phrase for the hundredth time. Sweat is running down my forehead from the exertion under the hot stage lights. I can feel a blister beginning to swell and bloom on my heel. I know that’s going to mean pain, and that the more I ignore it – and I will ignore it – the longer it will take to heal.

I smile. Not because it’s all worth it or anything like that. I smile because I must, and if I don’t—and if I don’t convince Diana that the smile is effortless—I’ll just have to do it again.

Diana is the ballet mistress, which means she is basically like the coach, and we’re her players for her to prep for the big game. She begs more of every position, straightening every line in our physique, making us bend until we nearly break while remaining as straight as a pane of glass—all while managing to look as peaceful and easy and effortless as a weeping willow.

Diana is who yells encore until the word starts to feel like a whip through flesh.

Last rehearsal, Diana’s command of encore meant doing a pique arabesque fifty-seven times in a row. My feet bled at the end. No one cares when your feet bleed here. Honestly, to see a track of bloody footprints down the glossy floors of the halls is no more suspicious than grass and dirt in the locker room after a football game.

The week before that, encore meant doing echappées until the entire bottom half of my body went numb.

If beauty is pain, then becoming art is torture.

Never-ending torture, too. It has taken me twenty years and counting to hold my hands correctly, and every single day I am still told that a finger is out of place. Usually it’s my thumb, jutting out just a bit too much. I catch a glimpse of it on a rare moment when I am not thinking about the stage and my body, and the relationship between them. I hate my thumb. I hate it like it’s out to get me. And in a way, it is. I’m supposed to have control of it and yet…I don’t.

And, of course, it doesn’t stop there. I privately sneer or glare at every inch of my body. It’s not just me who does this. It’s every dancer. We glare and find fault in the mirror and in each other—like predators looking for weaknesses in prey.

I loathe the extra millimeter around my hipbones that forms when I’m retaining water before my period. The greyish-blue discoloration beneath my eyes from practicing too late into the night and waking again too early. And later I will glower at my heel for daring to grow a blister when what I need is calloused, tough skin that still looks as soft as the most stationary porcelain doll.

The music begins again, Diana is already poised to dislike the performance and ask for another before we have even begun.