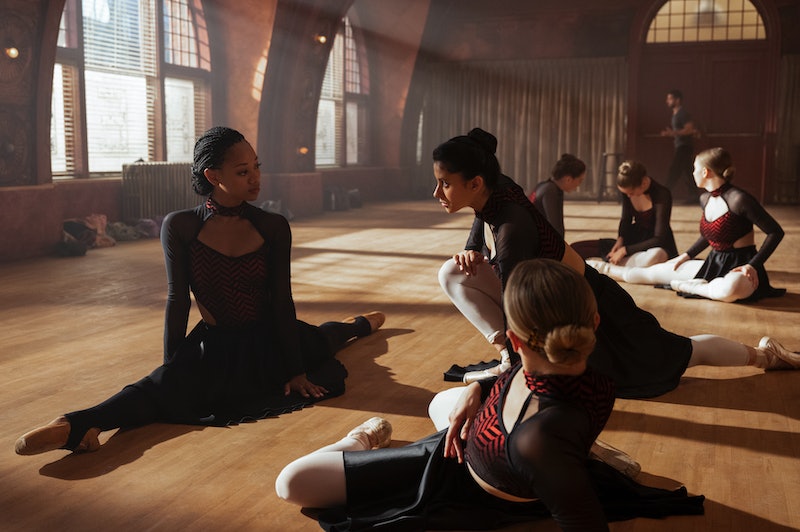 When it comes to an insular world like ballet, the dance studio is practically its own character. Such is the case for Netflix's new YA drama Tiny Pretty Things, which is based on the book of the same name by Sona Charaipotra and Dhonielle. Set in an elite Chicago conservatory where dancers vie to be prima ballerina, newcomer Neveah (Kylie Jefferson) sees it as her chance to finally shine. But the Archer School of Ballet may be more menacing than it seems as rumors swirl that a dancer was murdered there. It's a thrilling mystery wrapped in a tutu, but it's not a true story. The Archer School of Ballet in Tiny Pretty Things is also not an actual school in Chicago, but the setting is based on Charaipotra and Clayton's own experiences. (There's also no Archer School in New York, where the story was originally set in the book.)

Tiny Pretty Things grew out of a shared interest. The two authors met as grad students in the Writing for Children MFA program at The New School in New York, and soon realized they both loved dancing. "One day, I told Sona about my time teaching English at a pre-professional ballet academy. It’s such a fascinating, insular world, one I always wanted to write about," Clayton explained to the blog The Sweet Sixteens. "And she was very excited, because we’d both danced as kids — not nearly professionally. So I suggested we collaborate on it."

Clayton used to work at the Kirov Academy of Ballet of Washington, D.C., so "I was surrounded by pre-professional ballet dancers," she continued. It's likely that the Archer School is at least partially based on Kirov Academy, and she noted that they also drew inspiration from live ballet shows and dance memoirs.

And even though the Archer School is a fictional place, dance consultant Jennifer Nichols told Dance Spirit that they made sure it accurately reflects a real ballet school. "The team consulted about how the shoe room would really look, how the studio was set up, how to tie a pointe shoe ribbon," Nichols said. "These are all dead giveaways unless they're supervised by someone in the dance world. I was worried we wouldn't have the time and money to make it all look right, but it was never pushed aside."

The Archer School also doubles as a boarding school, and the insularity is another facet that is true to life. Zoe Cavedon attended the HARID Conservatory as a teen, and she told Elle that "ballet kind of consumes you" while you're living there. "I used to love playing sports and doing other extracurriculars, but now you have to worry about injuries and things like that, so I've had to stop. It's the little things I really miss," she said. "You give up more of a social life too. Most teens go out and party on the weekends, but we're pretty disciplined. We have to take care of our bodies. It's not a sacrifice in a bad way — it's one I'm willing to make because I'm getting to do what I love."

More like this
Caleb McLaughlin Details Racism From 'Stranger Things' Fans
By Radhika Menon
'Firefly Lane' Season 2 Will Be The Show's Last — But There's A Twist
By K.W. Colyard and Grace Wehniainen
Twitter Is Pouring Out Some Zhampagne As ‘Schitt’s Creek’ Leaves Netflix
By Brad Witter
Jeffrey Dahmer’s Arresting Officer John Balcerzak Got His Job Back After Being Fired
By Grace Wehniainen
Get Even More From Bustle — Sign Up For The Newsletter