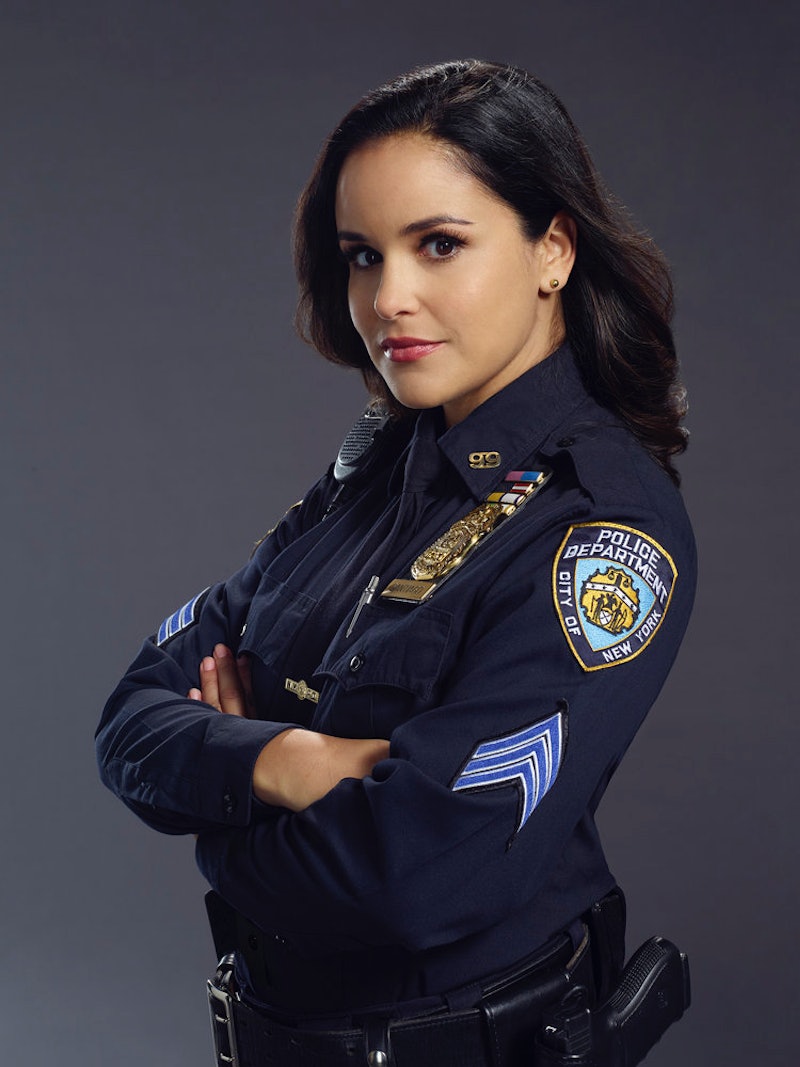 After the trailer for Escouade 99 premiered this week, Brooklyn Nine-Nine star Melissa Fumero called out the Canadian remake for its lack of BIPOC women in the cast, critiquing the series for its predominately white stars. Escouade 99, the Québécois remake of the NBC sitcom, cast white, non-Latina actors in two of the shows most beloved roles, replacing Fumero's character Amy Santiago with Mylène Mackay's "Fanny" and Stephanie Beatriz's Rosa Diaz with Bianca Gervais as "Rosalie."

On Friday, Fumero posted the Escouade 99 trailer on Twitter, writing, "OMG OMG OMG. This is like peeking through another dimension." However, the B99 actor also noted the whitewashed casting in a followup tweet, saying, "I’m suddenly curious about the Latina population in Quebec. Just sayin'." Beatriz responded to the tweets with a string of emojis on Friday, showing that she also had some mixed feelings about the international reboot's casting decisions, too.

Fumero followed-up with some further thoughts on Saturday, writing that she'd been "thinking about this a lot" and that while she understood "the Latina population is v small in Quebec (& how many of them are funny actors?) the Amy n Rosa roles could’ve gone to ANY BIPOC." The actor continued that her comments were not directed at the actors, because "it’s not their fault." She added: "It’s up to the decision-makers." However, she also found Santiago's characterization problematic, adding: "Also, you guyssssss Amy is not sexy ON PURPOSE. So that bums me out too."

Despite her reservations about the Canadian take on the sitcom, Fumero added her hope that the creators give more opportunities to BIPOC actors moving forward, tweeting, "Lastly, if the show is successful I hope the creators take that opportunity to hire more BIPOC in supporting and guest roles." Brooklyn Nine-Nine premiered in 2013 and was recently renewed for an eighth season. In 2018, Fox canceled the show after its fifth season, and fans fought for another network to save the series (NBC stepped up), noting the show's commitment to diversity and inclusion.

However, Brooklyn Nine-Nine recently underwent a reckoning following the murder of George Floyd by a Minneapolis police officer, renewed protests against police brutality, and advocates' calls to defund the police. In June, more than 300 Black artists, creatives, and executives signed a letter urging Hollywood to end the "glorification of police corruption" on screen, as per the BBC. Terry Crews, who plays lieutenant Terry Jeffords the show, said showrunner Dan Goor scrapped four episodes and decided to start the season from scratch. Crews said everyone working on the show had, "a lot of somber talks about it and deep conversations" about the content of the upcoming season but "right now we don’t know which direction it’s going to go in."