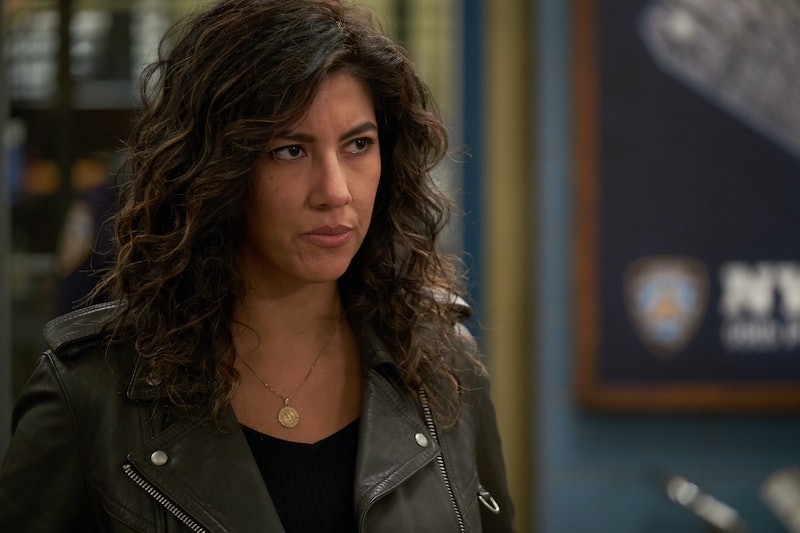 The fictional officers from Brooklyn’s 99th precinct will soon have some news in the wake of nationwide protests caused by the death of George Floyd, the black man who died while pinned under a white police officer in Minneapolis. At least, that’s what Brooklyn Nine-Nine star Stephanie Beatriz teased on Twitter on June 2. The actor, who plays Detective Rosa Diaz on the NBC comedy about a group of eccentric detectives in a fictional police precinct in Brooklyn, New York, revealed that something from the cast is on the horizon following the BLM protests and calls for accountability in how media portrays the police.

On Tuesday, June 2, Beatriz teased, “Something coming from the cast of Brooklyn 99,” with the hashtag #BlackLivesMatter. Her co-star Melissa Fumero retweeted it on her own Twitter page, but offered no additional insights. The tease comes after NBC Entertainment issued a statement that expressed solidarity with its black employees on May 31. “We stand with our black employees, colleagues, partners, and creators in outrage at acts of racism,” the statement read. “Black lives matter.”

Prior to the tweet, Beatriz also revealed that she donated a chunk of her Brooklyn Nine-Nine salary to assist protestors with bail. In a tweet sent in the early hours of June 2, she announced that she had donated $11K to the National Bail Fund Network’s #FreeThemAll Emergency Response Fund. The fund is being managed via Community Justice Exchange, a nonprofit dedicated to developing, sharing, and experimenting with “tactical interventions, strategic organizing practices, and innovative organizing tools” to end criminalization and incarceration, per its website.

Citing her role as law enforcement on TV, Beatriz called on other fictional cops to follow suit. “I’m an actor who plays a detective on tv,” she tweeted. “If you currently play a cop? If you make tens or hundreds of thousands of dollars a year in residuals from playing a cop? I’ll let you do the math.” She then thanked actor Griffin Newman, who starred as a cop on Blue Bloods, for leading the initiative. (While Newman had initially emboldened TV cops to donate, many others have joined in, too. One Twitter user wrote, “I own both seasons of the 80s cop show ‘Sledge Hammer’” alongside a receipt, while another tweeted, “I was only an extra on the show ‘Boomtown,’ so this is basically what I saw after taxes, but I was ‘playing’ a very blurry cop.”)

Beatriz isn’t the only Brooklyn Nine-Nine cast member to speak on the nationwide protests and Floyd’s death. The Lonely Island, the comedy trio comprised of Brooklyn Nine-Nine’s Andy Samberg, Akiva Schaffer, and Jorma Taccone, have shared resources to donate to the Black Lives Matter movement on Twitter, as well as to the families of Floyd and Breonna Taylor, the African American woman fatally shot by Louisville police in her own home on March 13. And Terry Crews thanked NBC for their commitment to black solidarity.

As fans wait for more news, it's unclear what the cast of Brooklyn Nine-Nine is planning to show support of Black Lives Matter. But the donations are certainly a place to start.

More like this
Gabby & Rachel Reveal How That 'Bachelorette' Rose Ceremony Twist Happened
By Grace Wehniainen
Everything To Know About 'RHOC' Season 17
By Brad Witter and Sophia Moore
'RHOSLC' Season 3 Will Likely Show The Cast’s Reactions To Jen Shah’s Guilty Plea
By Brad Witter
Does 'Locke & Key’s Ending Mean There Could Be A Season 4?
By Sophia Moore
Get Even More From Bustle — Sign Up For The Newsletter