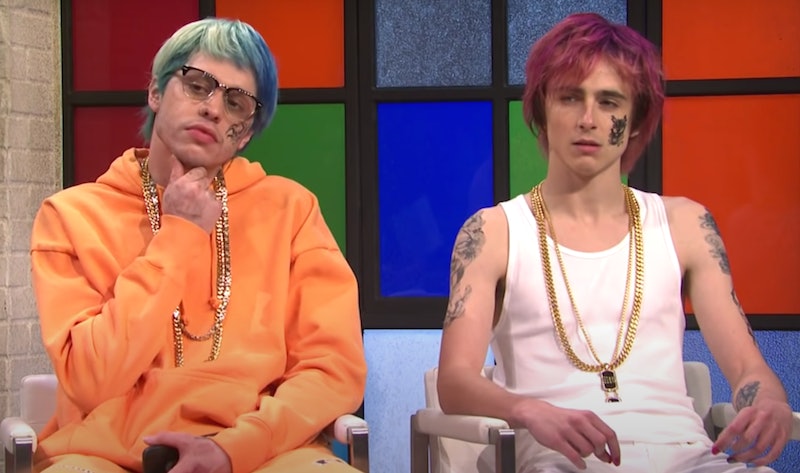 If Timothée Chalamet and Pete Davidson's cursed "Rap Roundtable" performance from last week's episode of Saturday Night Live has been living rent-free in your mind, you're not alone. TikTok users are now choreographing videos to Chalamet and Davison's "Yeet," the song they performed as a rap duo in one of the show's latest skits. During the sketch, the two cited TikTok (along with "Fall Out Boys" and the hamsters from the Kia car commercials) as a major musical influence, so the track's newfound viral status on the app should come as no surprise.

The rap's road to internet fame began when NBC shared a clip of the song on TikTok after the episode aired. "Blow this up," the network captioned the clip. The video has now amassed over 3.7 million likes and 76.5 thousand comments. And while the track is well on its way to having its own official dance challenge, Gen Z has been using the audio in other unique ways, too. Some have been using the song — and the "you never loved me, mom" lyric, in particular — to draw attention to some interesting family dynamics. Others got even more creative and put together a slowed-down, acoustic version of the track.

For the most part, young people across the app paired the rap with their own chaotic dance moves. And even social media stars like the Vlog Squad's Jason Nash and Toddy Smith got in on the fun.

The Harry Potter and Star Wars fandoms were also brought into the mix.

Some TikTok users even gave the song an astrological twist, proving that the zodiac signs that "yeet" together, stay together.

In sum, the viral hit has consumed the lives of many. Folks on TikTok have set it as their ringtones, they've thought about it all day at work, and they've even had trouble sleeping at night.

If "Yeet" was not already playing on a continuous loop in your head, it will be now.