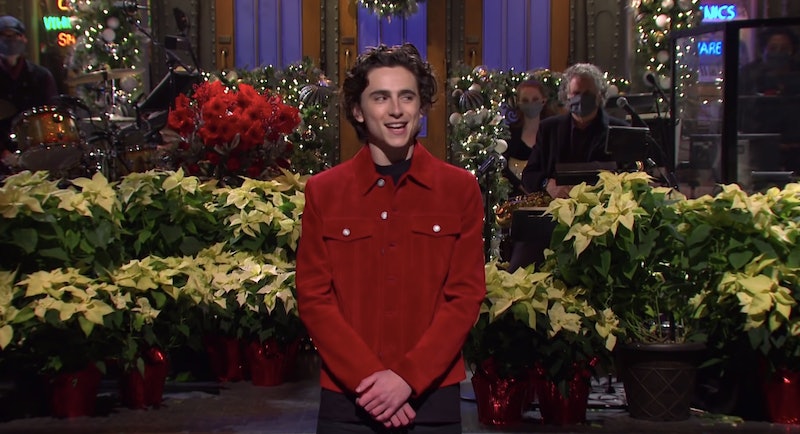 For the first time ever, actor Timothée Chalamet hosted Saturday Night Live on Dec. 12, and he didn't disappoint. For his SNL monologue, Timothée Chalamet revealed his secret SNL family history, reminisced about his childhood Christmases in New York City, and was even joined by Pete Davidson behind a piano for a low-key musical number.

To kick off his monologue, the actor revealed a decades-old link between SNL and his family. Chalamet's mother, Nicole Flender, previously appeared as a background actor on the series in a famed 1980s sketch called "Massive Headwound Harry." The sketch features Dana Carvey showing up to a party, unaware that his head is bleeding profusely from a gaping wound. The late Chris Farley, also in the sketch, spits out his food upon seeing the disgusting injury. And reacting to this action, standing behind the pair of comedy legends, is a silent woman looking stunned. That woman, as it turns out, was Chalamet's mother, establishing a long family history on SNL.

For the next segment in his monologue, Chalamet moved behind a piano to gently tickle the ivories while talking about how much he loved growing up in New York around Christmastime. He talked about skating in the Hudson River, sledding down the side of the Chrysler Building, leaving milk and cookies in the bathroom of the Port Authority bus station, and lots of other absurd things that New Yorkers don't actually do. The Call Me by Your Name star was then joined at the piano by fellow New York native Pete Davidson, who discussed his own New York upbringing. But since Davidson grew up on Staten Island rather than Manhattan, his Christmas memories are a little less glamorous than Chalamet's.

Chalamet's monologue was on the short side, but that just left more time for sketches that included a family of coronaviruses, a song number about a tiny horse, and a Dionne Warwick talk show sketch that featured Chalamet as Harry Styles and Chloe Fineman doing her Chalamet impression. In other words, Chalamet definitely made his mom proud in his SNL debut.