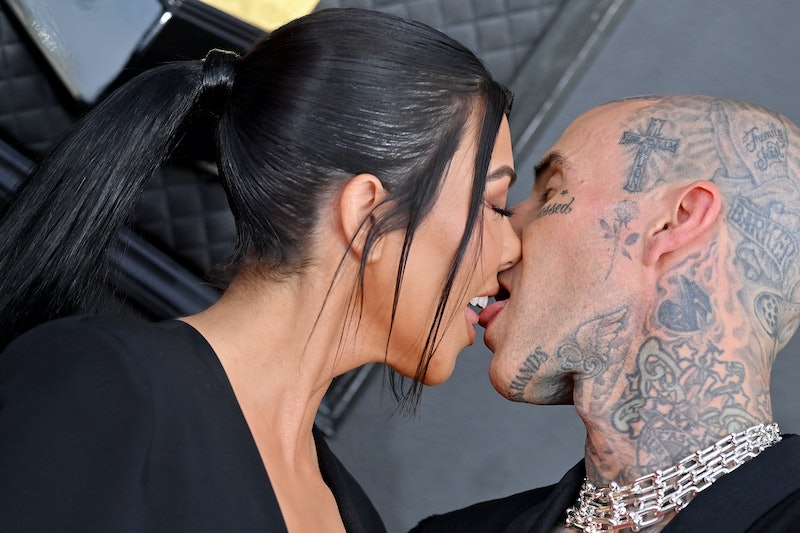 For Kourtney Kardashian and Travis Barker, what happens in Vegas probably isn’t staying in Vegas. On April 5, it was reported that Kardashian and Barker got married in Las Vegas in the wee hours of Monday, April 4, just after the Blink-182 drummer played the 2022 Grammy Awards, which the reality star attended as his date. The next day, Kardashian shared photos from their small Vegas ceremony on Instagram, confirming the wedding (and the Elvis Presley impersonator that officiated it) but clarifying that they’re not officially married just yet.

“Once upon a time in a land far, far away (Las Vegas) at 2am, after an epic night and a little tequila, a queen and her handsome king ventured out to the only open chapel with an Elvis and got married (with no license),” she captioned the post. “Practice makes perfect.”

TMZ reported that the couple walked into an unspecified Las Vegas chapel at around 1:30 a.m on April 4 to exchange their vows, with their own security team and photographer in tow. The nuptials were officiated by an Elvis impersonator, which a source said was “very important” to the couple. While TMZ said Kardashian and Barker brought a marriage license, which they showed to the chapel’s owner so he could serve as their witness, Kardashian confirmed that they got hitched without a license, meaning they’re not technically married yet.

While it seems that none of their loved ones were present in Las Vegas, the outlet reports that Kardashian and Barker are planning more wedding ceremonies and celebrations with family and friends, which she also hinted at in her announcement post. As soon as the news broke, the memes started rolling in, with many of them joking about Kris Jenner’s reaction and involvement with the news.

However, fans who shipped Kardashian with Scott Disick, her on-and-off boyfriend of nearly a decade, needed a moment to reckon with the news.

Many fans weren’t surprised at all by the sudden nuptials, considering how the couple is at nearly every public event.

However, some fans were simply happy for the lovebirds, especially for first-time wife Kardashian, who some are already calling Mrs. Kardashian-Barker.