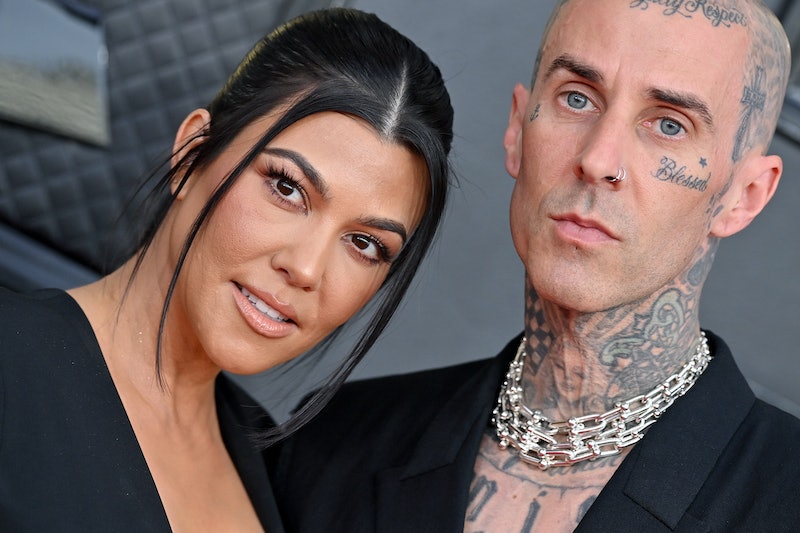 Kourtney Kardashian and Travis Barker attended the Grammys in Las Vegas on Sunday, April 3, but that was only the second most exciting thing the couple did in Sin City. On Wednesday, April 6, the Poosh founder shared photos from when she and the Blink-182 drummer tied the knot at a Las Vegas wedding chapel on April 4, shortly after Barker performed a medley on the Grammys stage alongside H.E.R. and Lenny Kravitz.

“Found these in my camera roll,” Kardashian wrote alongside a carousel of photos from their surprise nuptials. “Once upon a time in a land far, far away (Las Vegas) at 2am, after an epic night and a little tequila, a queen and her handsome king ventured out to the only open chapel with an Elvis and got married (with no license). Practice makes perfect.” The pictures show the newlyweds staring into each other’s eyes at the altar and making out next to an Elvis Presley impersonator.

The couple reportedly walked into the chapel to exchange their vows, and the Elvis impersonator was available to officiate their wedding (an “important” detail for the newlyweds). A source originally told TMZ that Kardashian and Barker presented a marriage license to the chapel’s owner, who also served as a witness during the ceremony, but her caption claims otherwise. The pair brought security as well as their own photographer. This surprise wedding apparently will not be their only wedding celebration. Per TMZ, their Las Vegas wedding will be one of “several.”

READ NEXT: The Best Memes About Travis & Kourtney’s Wedding

Barker proposed to his now-wife in October 2021 on the beach at sunset. The rockstar walked with Kardashian into a heart made out of red and white roses before popping the question. The mom of three revealed the engagement with a photo from the proposal, accompanied by the caption “forever @travisbarker.”

According to E!, Kardashian had no idea about the engagement and couldn’t stop telling Barker that she loved him. “I could see Kourtney smiling from ear to ear and put her hand over her mouth looking surprised,” an insider said. “The family cheered for them and went back into the hotel.” The proposal reportedly took place at the Rosewood Miramar Hotel in Montecito, California.

The couple was joined by both sides of their families, including Kourtney’s sisters Kim, Khloé, Kendall, and Kylie, her mom Kris Jenner, Corey Gamble, and Tristan Thompson. Barker’s children were also in attendance, including his stepdaughter Atiana. His daughter Alabama congratulated the couple on her Instagram Story. “So happy for you guys, I love u both!” she wrote.

Kim also shared her excitement, posting a video of the couple kissing at their engagement dinner with the caption “KRAVIS FOREVER.” Her video also gave fans a glimpse at Kardashian’s engagement ring, which is reportedly worth at least $1 million. But this isn’t the only glimpse fans will be getting. A trailer for the family’s upcoming Hulu series hints that there’s more to come.

“This makes me so happy,” Kris says through tears in the trailer, which dropped on Feb. 22. But apparently, the momager never showed the same support for any of Kim’s failed marriages. “She’s never had a reaction like that for me and it’s happened, like, a few times,” Kim quipped. The series is scheduled to hit the streaming platform on April 14, with new episodes every Thursday.

Kardashian and Barker first confirmed their relationship in February 2021, after rumors surfaced that they were an item in late 2020. Kardashian revealed their relationship status with a picture of the pair holding hands shortly after Valentine’s Day. They were close friends prior to their romance, but now the couple can’t seem to keep their hands off of each other.

While walking the red carpet at the Oscars and the Grammys, the pair was photographed with their tongues in each other’s mouths. They became even more touchy-feely at the Vanity Fair Oscars Party, where the musician was photographed grabbing Kardashian’s bum. Despite this PDA, there are some parts of their relationship they plan to keep private.

“It’s so sacred to me and I am very protective of it,” Kardashian told Variety last month, explaining that some things won’t be included in the Hulu series. “I think I’ve learned a lot of lessons. There is a lot of us on there, and we’ve had such a good time doing it because we have such a good time when we’re together, but I definitely want to protect it as much as I can. But also, this is my life.”