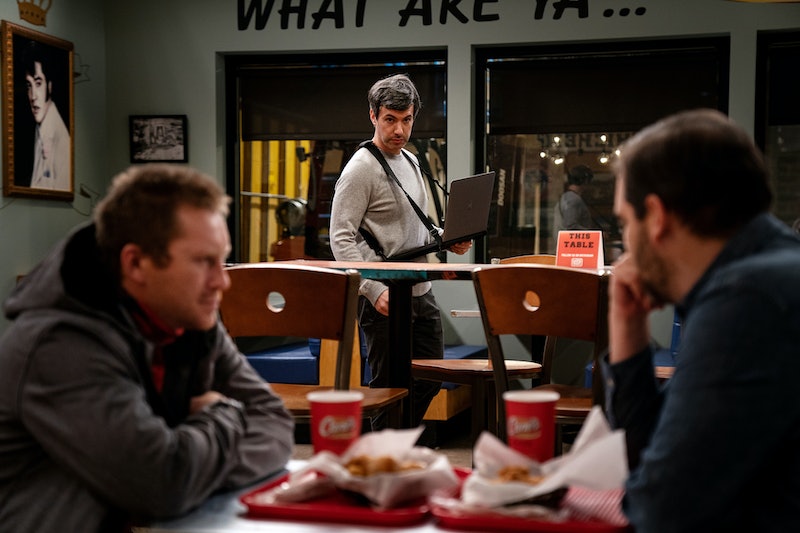 Nathan Fielder in 'The Rehearsal' - Photo Courtesy of HBO

Nathan Fielder’s The Rehearsal has viewers obsessed with a particular accessory: his laptop harness. Fielder, known for his Comedy Central show Nathan For You, is back with a question (and an HBO budget this time): “When a single misstep could shatter your entire world, why leave life to chance?” The show focuses on rehearsing big moments in someone’s life, whether it’s having a difficult conversation with someone that could go catastrophically wrong, or practicing what it’s like to raise a child into their adulthood. Organized (and not so organized) chaos ensues.

Fielder wears the laptop harness while working on his rehearsals to ensure everything goes according to plan. The harness makes its debut during the second episode, which dropped on July 29, as Fielder helps a man during a rehearsal for a difficult conversation. He observes on the sidelines, and refers to his typed-out notes.

The laptop harness has remained a hot topic, as evidenced by fans’ tweets.

Fans are planning to buy a laptop harness for themselves, while some are photoshopping Fielder into scenes of their favorite television shows and movies, such as The Sopranos, Seinfeld, and Friends.

Maybe Jerry Seinfeld’s “show about nothing” was a highly elaborate rehearsal.

What about the finale of The Sopranos? Did Tony Soprano really get whacked by the guy in the Members Only jacket? Did Meadow learn how to parallel park? Only Fielder knows.

One Twitter user graciously shared a template to make memes, just in case you ever need Fielder looming over everything.

‌Some people have also wondered whether the laptop harness is something that exists IRL, or if Nathan made the contraption himself.

Luckily, some fans did their research. It turns out Amazon has one available for purchase, so you can steal his look!

Get ready for people to dress up as Nathan Fielder for Halloween. All you’ll need is the laptop harness, a salt-and-pepper wig, and a gray crewneck sweater.