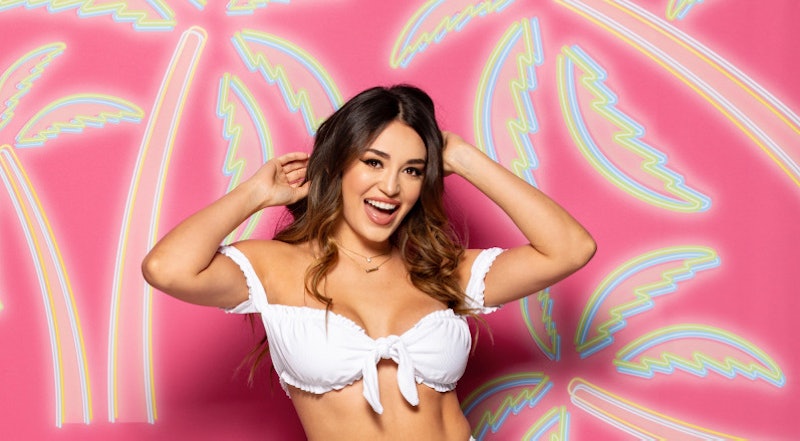 Casa Amor is about change everything on Love Island Season 2, especially with Mercades setting her sights on Johnny, who seems tempted by her despite his devotion to Cely. But while Mercades is new to the show, she's not new to being the center of attention. With a large internet presence, including 145,000 followers on TikTok, Mercades knows how to stand out and get people to notice her.

Mercades' biggest following is on TikTok, but she has 47,000 Instagram followers and 34,000 YouTube subscribers as well. She doesn't exactly have a brand (unless that brand is sticking her tongue out seductively while taking selfies and dancing on TikTok), but she does do a little of everything. On YouTube, she posts videos about everything from what she bought at the dollar store to what she's wearing to dyeing her dog's fur purple. She hasn't posted in a few months, but maybe when she returns from Love Island she'll spill some production secrets in an upcoming vlog.

On TikTok she can mostly be seen doing viral dances and lip-syncing to funny chunks of dialogue. She once did a video about taking letters off Mercades to give herself a new moniker, and in it she spelled her own name wrong... or did she? Perhaps she made the internet version of herself have a more unique spelling so she would stand out from all the other Mercedes Danielles out there.

Her Instagram looks like most wannabe influencers' pages do, which makes it her most boring platform. She mostly uses it to post selfies of herself with one finger on her lips (different than her TikTok side tongue face, but to similar effect). And she documents herself doing influencer-y things like going to Coachella while touching her lip with one finger.

Her presence on each social media site shifts slightly depending on the audience. On TikTok, she's lip-syncing and dancing while looking cute. On YouTube, she shows the behind the scenes aspects of looking cute. And on Instagram, she's just standing around looking cute. The approaches are different, but the goal is the same: to get people to notice her and think she's cute. And based on her high follower counts — and Johnny's inability to resist her temptation on Love Island — it's working.